Animal Crossing: New Horizons is now the best-selling game ever in Japan. On 3rd place we have Pokémon Gold/Silver (GB) with 7.17M units, on 4th is Super Mario Bros. (FC/NES) with 6.81M and on 5th place is Super Smash Bros. Ultimate (NSW) with 6.65M.

Just as I (and many others) predicted. New Horizons is one of the best in the series, if not the best. Animal Crossing went from something more minor that maybe a few million people talked about to a global phenomenon.
I hope Nintendo doesn't get cocky with the next installment by making it pretty same-y. We've seen that happen at least once before with Animal Crossing (Wild World to City Folk). 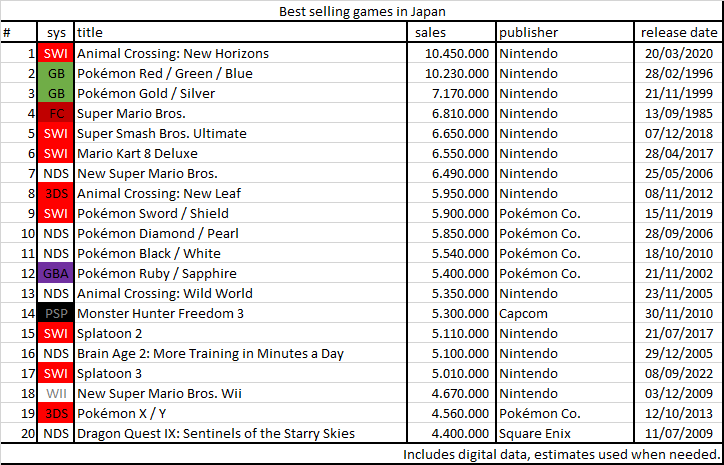 Nintendo: Who invited Monster Hunter to our party?

If only we knew how much Monster Hunter Rise sold exactly in Japan. It should be at least close to the top 20 but we'll never know.

Looking at famitsu is around 2.69M physical so it would need 1.71M digital to reach the 4.4M of the #20 spot. I don't think the digital rate is that high but as you said, we will never know.

Did you include the MHR+SB bundle in that number? It was 50% in Japan when it reached 7.7mil WW on Switch. With how much the bundle and the cheaper new price version sold plus it's eshop ranking it could definitely be up there.