I think its likely there is decent growth but the thing is a lot of these are likely going to China (same problem as Playstation), so its still to be seen how much of an impact current hardware sales are having on the domestic market. Unlike Playstation we won't have software sales to use as a benchmark

Notice that while Xbox Series X/S once again sold more units than the PS5 in Japan, an undetermined number of these units are actually being shipped and sold in China.
Pictured, just an example of a Chinese online seller promoting Japanese SKUs of the Xbox models. https://t.co/XhE8wUZQ9s pic.twitter.com/8rQ12ZhJKi

9k for xbox is goddamn strong wow. And it did 6.6k last week so it's not just a random big supply for a week than nothing. XS will grow back to it's 360 territory this gen.

It's really nice to see Xbox with such good numbers in Japan. 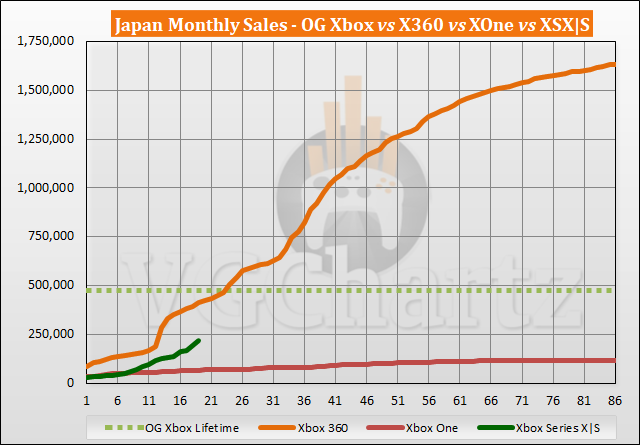 But that has always been the case for all consoles.

Taken from ITmedia. So anyway, the CEO of Sony, Mr. Ken Kutaragi, made a surprise visit to a Bic Camera branch at Yuurakuchou to personally hand over a PS3 to the first person in line.

The first guy in line was CHINESE. Not only that, CNET Japan was also reporting on the number of Chinese PS3 auction listings they found on Taobao, a Chinese auction site, and predicted yesterday that a lot of the people queuing up would be Chinese. And indeed they were. Even Danny Choo estimated that 30% of the people queuing up were foreigners. Q-Taro and other sources also reported that people, including homeless ones, were being paid to queue up. Imagine how many Japanese gamers walked away empty handed because of the number of Japanese PS3s being shipped to China and all over the world for 1,200 USD or so.

To what degree though?

The situation is exponentially worse though and has been given as the explanation for why PS Hardware is so disproportionately high compared to software, and why initially the PS5 was able to outpace the PS4 in 2021 despite seemingly less favourable market in Japan compared to 7 years ago.

Seems like a great FW opening for Three Hopes. I wonder how it does fare against Age of Calamity, Hyrule Warriors and the first FE musou ?

Anywoo, It's one of those rare weeks where the weekly 2022 Switch sales doesn't surpass the pre-Covid period

Well we don't know but now it is mostly used as an excuse for why the sw is doing bad but is the PS4 software also doing bad  because foreigners are buying all the ps4's?

No one is buying PS4's check its weekly sales. PS4 software is kind of doing what you would expect for a system which is discontinued in Japan for over a year. PS5 however has had weeks where 50k units of hardware is sold and no software in the top 30 selling over 1k. So that does in fact need explaining.

The Ps4 still has many releases in the last years, anyway: