Fair enough. The game began development less than 2 years after the Wii U was released and I think that says a lot.

There aren't too many Wii U games left to port though 😜

This makes PS5 the fastest selling console of all time.

Transcription of the image above:

Make of that what you will. According to Zhuge, Wii didn't have that many consoles manufactured yet. If someone has better sourcing, it would help!

He is right about this. Though Wii isn't that far behind and is likely going to overtake the PS5 in the coming months. Expect a PS5 vs Wii sales comparison article in the next few days. ;)

That is great sales. Originally i wasnt sure if the sales for the ps5 would top the ps4 so it is great to see that it is selling so well, and the lack of consoles suggests that this is going to continue yet.

If we want to be good guys we can say that the best interpretation is that those people have a very bad memory, because yes PS5 have had the strongest SW lineup so far in Sony history.

Even The Ataribox is being scalped so nothing is safe from scalpers.

Sony's numbers are more often than not sell-through.

I don't see the Wii mentioned anywhere in Zhuge's tweet though.  And the link to the Sony announcement is worded very carefully to state that it is the fastest selling console in Sony history, without mentioning all time console history.

PS5 is the fastest-selling console in the company’s history and continues to outpace sales of its predecessor, PlayStation®4 (PS4™).

I don't know what date the Wii crossed 10m units sold.  But I do know that the Wii had a staggered launch (NA - 11/19/06, JP - 12/2/06, EU - 12/8/06), whereas the PS5 launched simultaneously Worldwide.  So, the PS5 was drawing sales from Japan for about 2 weeks (13 days) longer than the Wii, and it was also drawing sales from EU (Sonyland) for almost 3 weeks (19 days) longer than the Wii.  I think for these reasons, Sony themselves are making it clear that PS5 is the fastest selling PlayStation, without attempting to claim that it is the fastest selling console of all-time.

Adding this graph from ArsTechnica for perspective: 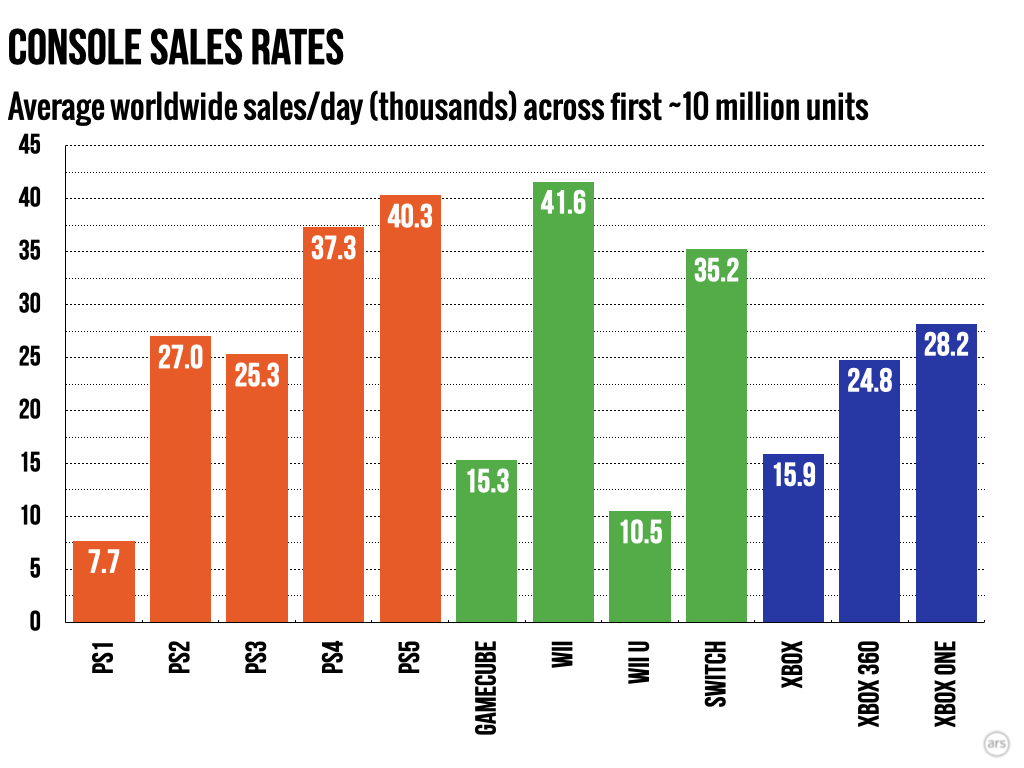