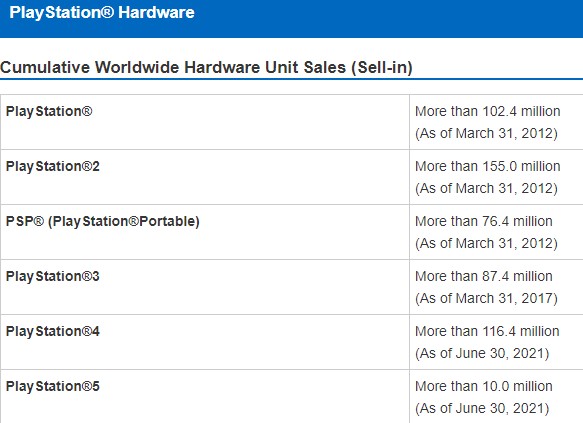 Alrighty then.  Odd that they didn't use that date in their own press release then.

They didn't because that's sell to retailers not sell through like the other date.

Like Sony would care. One item sold is one item sold. Given that sell through is 100%, it currently doesn't matter anyways.

I'm still puzzled by those low PS5 numbers for last quarter. A quarterly drop from 3.3 to 2.3m units is drastic. I wonder how they will sell those planned numbers for this fj (it would mean doubling the output), given the Covid situation is rapidly getting worse in China..

Did they really just pretend the Vita didn't exist?

Yes, along with the rest of the world.  :O

Wii crazy is the world. U don´t remember? I try to buy one six months after the launch in Europe and only take one only four months later. The shipped and sold to consumers on Wii first years is the same thing.

And the scalpers exist but it´s less prevalent.

Nobody spín this. We discuss the success metric. Great hardware sales, but combined software sales are not a good metric.

Went to that site and it has: *Sales data on PlayStation®Vita are not disclosed

Because for official numbers they use shipment and precise data because of regulations, for marketing PR they use their sold through estimative that can be a little imprecise.

And people please stop confusing being on shortage/sold out as 100% sell through... yes everything shipped is sold whenever available on the store (which also makes the staggered release irrelevant since if they had released in all markets at once they would have less inventory in each because it would be spread out. Also explain why Sony had smaller shipment in some periods, because it was saving some inventory to send to a release in a new market), but still it takes some time between shipping (going out of the manufacturing plant) and arriving to the store to be sold, actually several weeks (reason why VGC considers reasonable at least 1 month of weeklys sales as difference between shipped and sold, and if you go and check official numbers from Sony on the quarterly reviews and VGC sales on the same date you`ll see something like 500-800k difference for PS5). So yes if Wii was at 10M shipped and PS5 at 10M sold through at the same number of days it means PS5 had achieved 10M sold to customers about 15-30 days earlier than Wii because there would need some time for the shipped units to arrive and be sold even if sold 1s after delivery it would have took 2 weeks on the ship. It is not that hard. As everyone said don`t need so defensive, soon enough the Wii curve will be in a position PS5 won`t touch, until well it pass through on the year 5 or so.