So I got my Steam Deck Dock the other day and this little thing just keeps getting more and more amazing. Yesterday I did all my work on the Steam Deck with a nice triple-monitor-setup. Worked like a charm. I also had no problem whatsoever to connect a DualSense Controller. So I played a little Tropical Freeze in glorious 1080/60p and I'm honestly starting to ask myself why I even need my PC anymore.

Half a year after I got my Steam Deck I'm still blown away by what the device has to offer. Best handheld ever. Period.

That's super interesting to read and one of the reasons for this thread: getting actual hands-on impressions. Did you install any other OS on your Deck or just went full Linux for your regular day to day activities?

I worked with Linux at first and seemingly all was fine. But then one customer complained that he got a corrupt file. Something with Libre Office didn't quite work and even with the online version of MS Office it wouldn't work.

I just made the file on my PC but I also installed Windows to go on an external HDD. I didn't want to mess up the bootloader and all that stuff. Windows 11 runs perfectly fine, but it's slow as fuck coming from an HDD. So I'll get an external SSD next month and that should do the trick. While Linux is perfectly fine for me most of the time (I've been using Debian for 20 years now) sometimes there is stuff that just won't run that well, so it's great to have Windows as a fallback option.

But to answer your question: for day to day activities, I definitely prefer Linux.

I tested the Standby mode of my launch Steam deck and compared it with some of my other handhelds.

Almost 10 days, which is awesome for a PC!

I was pleasantly surprised by my PS Vita with its 10-year old battery... 15 days, and it beat my Switch by half a day.
The battery of my 3DS XL was empty after 3.5 days. 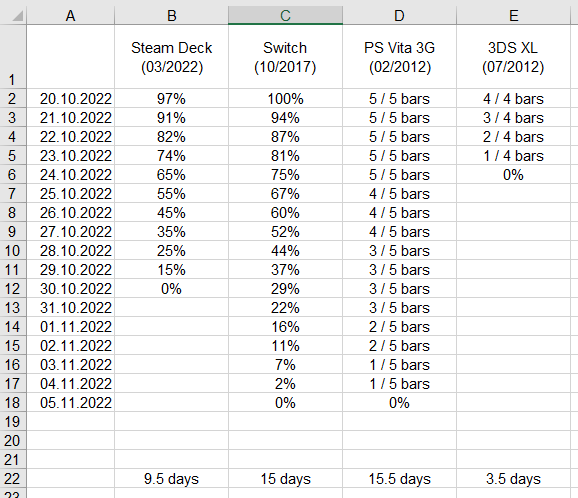 But with minimal brightness the results aren't bad either.

My first run was without setting a bandwith limit. In 4.75 hours the Steam Deck downloaded 380 GB in total, so 80 GB per hour or 22 MB/s on average... almost the maximum of my internet connection.

My first run with the Switch was with 2.4 GHz Wi-Fi. It downloaded 55 GB within 7 hours, then the download stopped due to the energy mode, which activates at 20% battery charge.

My first run with the Switch was under optimal conditions: 5 GHz Wi-Fi and the distance between Switch and router was only two meters. It downloaded 130 GB within 4 hours, then the download stopped again due to the energy mode. 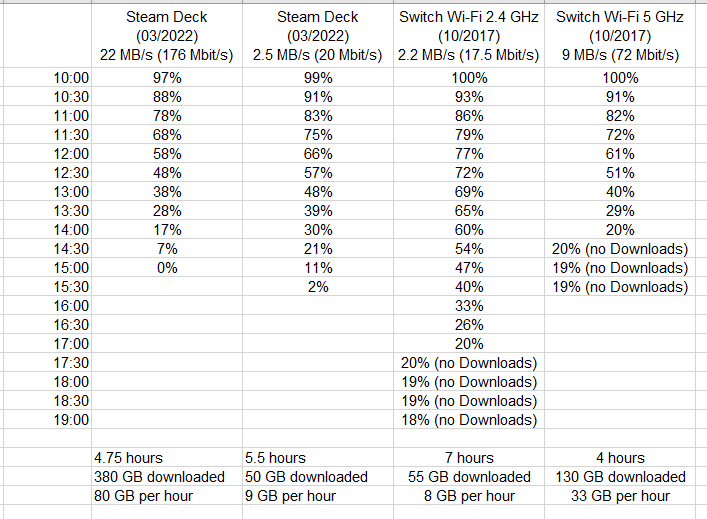 This is awesome investigation, Conina! Nicely done. I really enjoy this kind of approach.

Wow, So a knock came to my door today with a parcel for me, i opened it up and couldnt believe my eyes. My wife ordered me a Steamdeck and i didnt even have a clue!. I was telling her awhile back id like one but wasnt expecting her to buy me when, i guess she really does love me

. First thing im doing is trying out some emulation and getting a bigger Micro SD card and then going to get a 512gb SSD drive. I'll upload some pics in a bit if i get a chance.

Whoa, that's a keeper right there!!

Any chance Steam Decks will be stocking shelves ever?