You are only reinforcing my argument. Again, religion being the underlying theme.

Never happened. We can play "What ifs" all day long.

Hundreds of millions of dollars locked up isn't just 2%.

As far as abuse is other types of "sick" abuse is concerned... That sits at around 5%. (Reported cases anyway, there are likely unreported ones.)
https://www.ncbi.nlm.nih.gov/pmc/articles/PMC6676731/

However the number of abuse cases is irrelevant, the fact that it's the *leaders* that are the abusers, which are meant to represent the organizations interests is what is truly abhorrent, the ones that are facing the community, the ones that people look towards for assistance and advice.

It's easy to destroy your social license.

Albert Einstein? He paved the way for all the modern comforts we enjoy today... And his work is still referenced in theoretical physics.

Most read book? Obviously the Bible. - But I am unsure what that has to do with the price of beans in China.

The Bible has been used to deny equality in modern times, that alone is enough to shut it down.

Considering secular, non-religious nations tend to be more peaceful... I am going to go out on a limb and say it would be far better without the religion... Because that is generally what the evidence tells us.

And I could do the complete opposite. What's the point?

No. You are making it to be something it isn't.

Israel invaded and occupied that territory under the belief that they were "entitled" to it as per the Bible.
It is about religion.
These people are highly indoctrinated and strongly believe in their religious texts to the very word.

Britain’s support for the Zionist movement came from its concerns regarding the direction of the First World War. Aside from a genuine belief in the righteousness of Zionism, held by Lloyd George among others, Britain’s leaders hoped that a statement supporting Zionism would help gain Jewish support for the Allies.

On November 2, Balfour sent his letter to Lord Rothschild, a prominent Zionist and a friend of Chaim Weizmann, stating that: “His Majesty’s Government view with favor the establishment in Palestine of a national home for the Jewish people.”

The influence of the Balfour Declaration on the course of post-war events was immediate: According to the “mandate” system created by the Versailles Treaty of 1919, Britain was entrusted with the administration of Palestine, with the understanding that it would work on behalf of both its Jewish and Arab inhabitants.

Again making use of religion for political gains.

This is fascinating to watch, more real talk on mainstream media, there is definitely a change in the air round this in the US even though the Biden Administration is staying complicit in this human tragedy 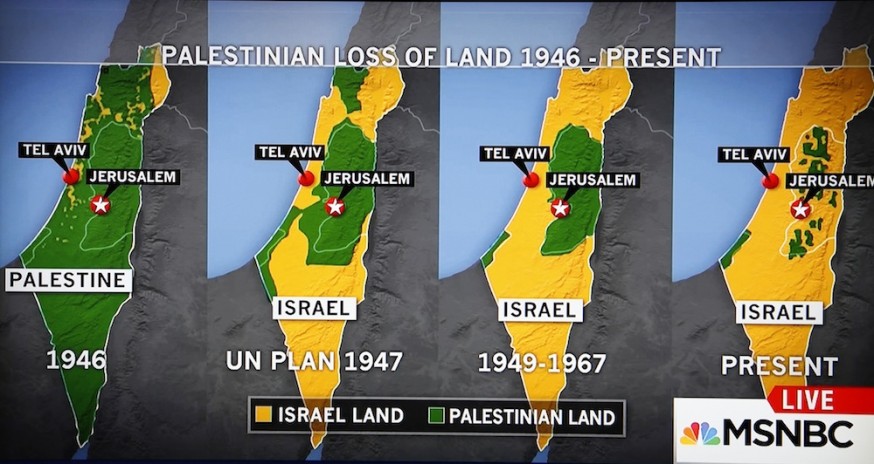 It's clear w can't convince each other. But the way I see it, it's not about Judaism or Islam, it's about occupier and occupied. It only started in 1948. It's not that complex and it's easy to see which side to take just like it was in apartheid south Africa or in the colonies under British rule or what happened in North America. The core issue isn't religion. Making it about about religion just adds complexity that isn't needed to solve the issue and the Israeli government knows that and is using that to their advantage.

How stupid was the UN. What did they think would happen with that map? They were asking for a conflict to erupt even if the landgrab was accepted by the natives. They could've made it so everything above Jerusalem is Israeli and everything below is Palestenian. We can see how just 2 years later, Gaza became this open air prison nightmare.

Bernie Sanders on this issue on the Senate floor.

The broadcast ended during the "falling on deaf ears" rebuttal. So tiring when the 'defense' is hammering on one single truth (countries have the right to defend themselves), ignoring everything else.

It's good stuff finally gets said in the media in the US, will it matter though.

Cease-Fire has be declared on Gaza, it is little known mainly because of the mainstream media that Hamas have been requesting a Cease-Fire many times prior, but Israel have ignored this request up until now, Biden is widely praising the Israelis on it's Cease-Fire, now making it clear the President will release hundreds of millions of dollars in military equipment to Israel very soon

“Palestinian children and adolescents in the Gaza strip, nearly 90% had experienced personal trauma and more than 80% had witnessed trauma to others. In Gaza, it is virtually impossible, experts say, for children to access mental health care”.. Frontiers in Psychiatry

It was on purpose. My whole life I have been a west apologist and will keep on being as the alternatives are much, much worse. But what they did after WW2 in the middle east is just pure evil, on purpose, knowing that would generate chaos forever when defining the borders of Iraq and other countries. What they did in Palestine was on purpose as they knew that separating the palestinian state in two different areas would facilitate for Israel to take it over.

And it is one of the reason I think Palestinians should accept defeat and create their own state ASAP because soon all that will be left for them will be Gaza.