They tried buying Nintendo and SEGA when they broke in the console business.

As much as I enjoy Elder Scrolls and Fall out games and after spending billions on all these companies they still don't have a franchise more important than Mario or Zelda to me. Yes yes I know people love that minecraft thing. Lets see if the main people at Bethedsa stay or take off eventually like the Stamper brothers and most of Rare.

Why not just cut out all the drama and buy PlayStation once and for all. If you can't beat em, buy them. 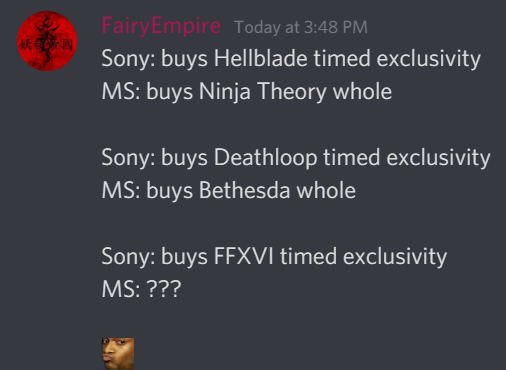 Hopefully Google doesn't wake up as well and for example buys Take 2 interactive... It will be Stadia vs xCloud

Take with a grain of salt, but in france europe there is a little growing rumor about microsoft buying Sega !

A manette blue,black & white called blue shock, same name as a adidas sonic shoes, a pic on a girl working for sega making a big X next to a box, a list of shopping on phil spencer with bethesda & a missing number 8, a T-shirt sonic on microsoft guy, phil making trips to japan & sega stock market shares raising for no reason since a week (even its against law that look some ppl is happy to buy sega stock again)

Its just a big rumor here after bethesda news, i think its somewhat a fun rumor in any case so i share here !

^^I don't think MS is even allowed to buy Sega. Japan laws, or am I fake news?

Well, you must have some really short memory...  MS is just as guilty as Sony on this front...  all companies do this to some xtent.   Let's not forget Bioshock, mass effect 1, Tomb Raider,  Cuphead, Titanfall ... etc.  The reason why they stopped using this strategy, is because, with Sony leading the race, it became increasingly more expansive  to continue to execute on this strategy.  Now they just purchase entire studios / publishers instead!  Lol

I don't think even Microsoft can keep EA from being scummy.

Anyway, I've got a bad feeling about what Nadella said. It feels like they're going the Disney route, and you know where that's lead. *lights fuse leading to angry Star Wars fans and shitty Disney remakes*