Forums - Gaming Discussion - Developers are having a difficult time scaling games back to PS4/Xbox One...

Digital Foundry's John Linneman has talked to a bunch of developers who have said no one wants to work on the under powered Jaguar CPU's any longer. Says it's a painful process. The tweet was followed up by a post from Liza Shulyayeva, a former DICE programmer who confirmed it's hard to scale to these older systems.

Could this be why Xbox One support got removed from some of the Series X games? 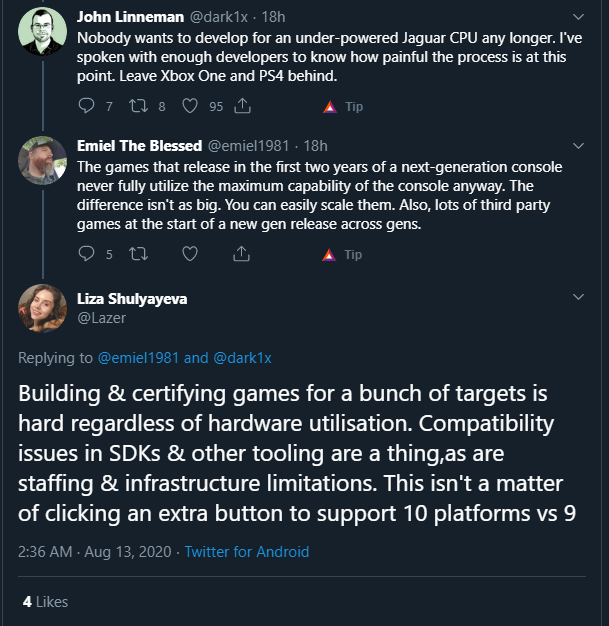 No, that can't be true, we heard it is very easy and don't impact next-gen at all.

It's fine, PS5 is there for a reason.

This will make games trickier to run on Switch, but Switch wasn't getting much AAA third-party support anyway. At least not as much as some people claim.

It is true, but also would still have those games that would get a good sales push with a Switch port and the company may port or hire someone to do it. We will need to see how it will happen.

Thread title mentions PS4/X1, but your ending question is only Xbox related...

C'mon Goopy, you gotta try harder than that man.

Besides all the other reasons that could be given, one that is valid is that Sony is moving away from PS4 faster and didn't mention any first party crossgen to be released.

It's not surprising that devs hate Jaguar (it was a mistake for Sony and MS to use it in the first place because it was already outdated tech in 2013), but that is not going to stop AAA 3rd party publishers from supporting PS4/XB1 until at least early 2022. Publishers care about one thing, money, and abandoning the current gen install base of over 160m is unacceptable to a publisher when the next-gen subscriber base won't pass 40m until sometime in 2022 most likely. So don't be shocked when more 2021 AAA multiplats other than the already announced Far Cry 6 and Hitman 3, like CoD, FIFA, Madden, Assassin's Creed, Battlefield 6, Suicide Squad, Batman, Harry Potter, etc. are still on PS4/XB1. Same goes for JP publishers, historically speaking they are even slower to move to next-gen only than AAA western publisher are.

Same goes for MS with Halo Infinite, they don't see making Halo Infinite Series X/PC exclusive as worth it this early in a generation, they're missing out on a 50m XB1 install base if they make Infinite next gen only, that is alot of potentially missed sales for them, and they don't see the next-gen hardware sales boost that next gen exclusivity on Halo would provide as worth it to them clearly. MS wants as big of a potential subscriber base for Gamepass as possible, and Halo next-gen exclusivity this early in a generation is counter intuitive to that goal. They will start making their first party games next-gen/PC only in early 2022 most likely, starting with games like Everwild, Fable, Avowed, State of Decay 3, Forza Motosport reboot, and Hellblade 2, while 2020 and 2021 games like Halo Infinite and Forza Horizon 5 will most likely remain cross-gen. Maybe Flight Sim will be next-gen exclusive in 2021, because based on the PC minimum spec I'm doubtful that Asobo can get it to run on Xbox One.