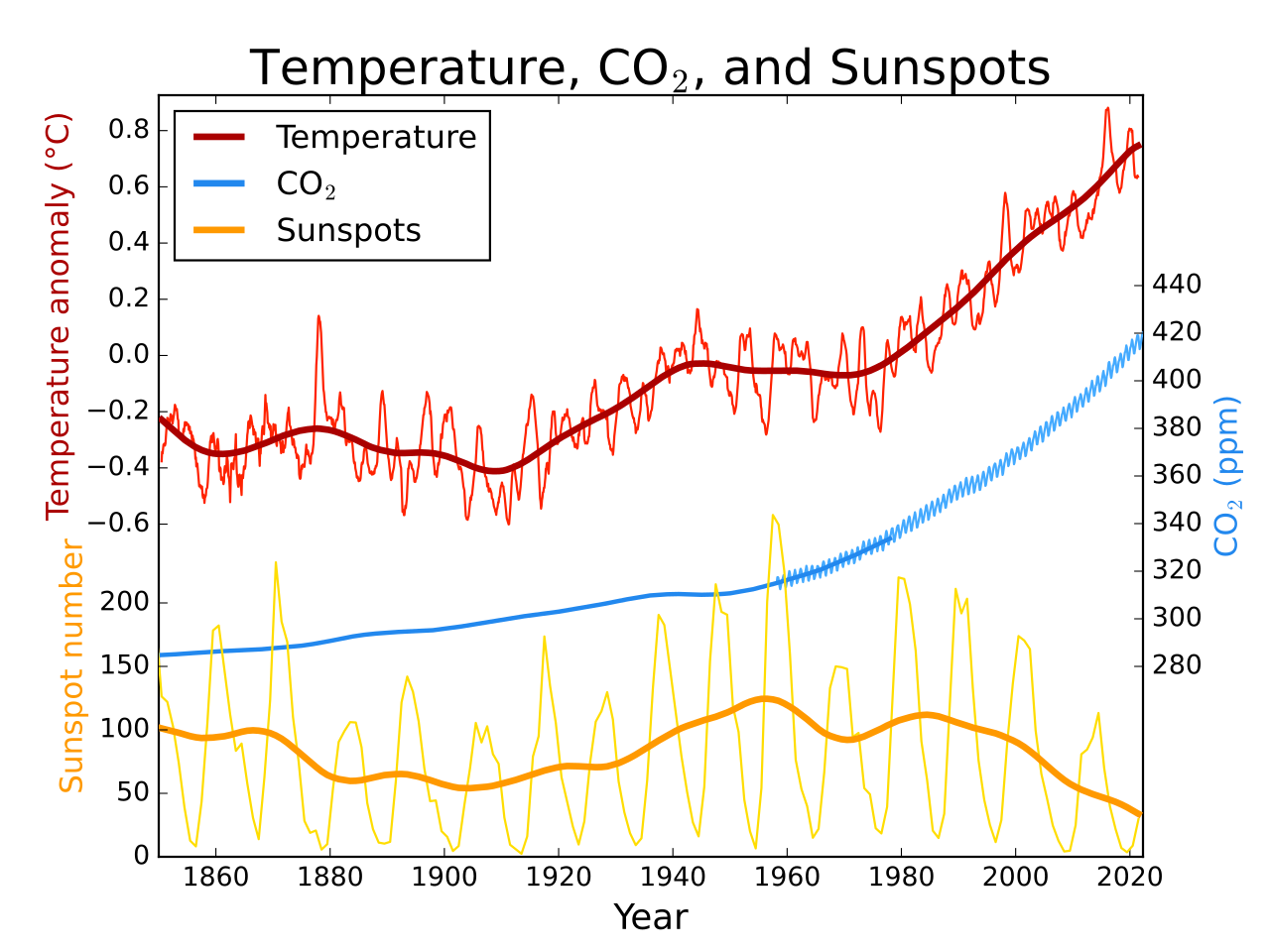 The sun is currently very generous to us but it doesen't matter. We caused this shitshow ourselves.

Well maybe it have... if it was winter people would not be on the streets, this spring was very hot

Yes i know,but it is curious to see the amount of the effect and following that graph the sun seems to be less active than it should be yes.

You can clearly see how industrialization effected the growth here.

While the Human effect is clear, cycles happen regardless of human interference.  The Earth is overdue for many natural disasters that quite frankly, can greatly effect global temperatures.

What Farsala said. 2000 years is also too short of a timespan. With statements like ‘ever recorded’ they always mean since they started actually recording data in the moment, which didn’t happen until relatively recently. Like I said I’m not saying we don’t have any influence or aren’t accelerating things (the rise in CO2 in the atmosphere since the 1800s coinciding with a rise in temperature would be too much of a coincidence), but the world is already long overdue for such a rise in temperature.

Heh, yeah that’s one way to look at it.

Yes lets all pray for a something like a super volcano errupting, say Yellow Stone?
It ll throw ash up into the atmosphere and cover unsually large amounts of it, cooling down the planet.

The downside is something like 40-60% of americans will die, and world will face mass starvation for a few years after.

Encase that doesnt happend.... maybe we should try stopping the global warming?

Something tells me "sunspots" isnt the full picture, of the effects the sun has on the earth and its temp.

Still theres like 20 year delay, between the blue line and the red one.
Ei. the greenhouse gasses we release today end up effecting us like 15-20 years down the line.


This also means, when we think of problems, we need to think 20 years into the future.
How bad will our climate get, from what we've already released upto today?

Thats the problem with climate change it takes time, so it just slowly creeps up on you.
Alot of people are just willing to say "screw it, not my problem, I'll be dead by then anyways".
It just keeps getting incrementally worse.

However at some point, it ll be so bad, that it'll effect us, and we're reaching that point.

Not many here obviously know that science has data from 100's thousands of years ago through ice core sampling and rock isotopes to see back very far, we are technically moving into a cold period based on natural cycles due to our orbital position to the sun https://climate.nasa.gov/blog/2949/why-milankovitch-orbital-cycles-cant-explain-earths-current-warming/ , but hint it's not getting colder, scientists from around the world have a consensus that we are in a period of human induced climate change due to how rapid it is, something the natural cycles don't do

NASA has much of this explained for the layman https://climate.nasa.gov/evidence/