Saw this recommended for me, it was a Nice apology and he even explained Cerny talk in a easy to understand way

Well it is kinda important to inform customers that there isn't much use for the expensive stuff they want to buy because developers aren't putting it to use.

I’d like to thank all participants in the console wars for being such relatively pleasanter critics than opponents in the store wars. 😀

Not with the Xbox 360 initially.
It wasn't until Microsoft implemented external USB drive support that USB storage of up to 2TB could be used back in 2015.
https://www.windowscentral.com/xbox-360-software-update-adds-support-2tb-external-hard-drives

And in 2010 USB Flash Drive support was added with a max formatted capacity of 16GB (Or two drives for a total of 32GB).
https://www.gamasutra.com/view/news/118771/Xbox_360_Update_Adding_USB_Flash_Drive_Support_In_April.php

So whilst technically you could run an SSD in a USB enclosure and format it into two 16Gb partitions... It was hardly ideal.
An SSD limited to 35MB/s is going to be slower than the Xbox 360's internal mechanical drive, especially the 500gb drive model which should sit at around 50-60MB/s.

Yeah the I/O was the bottleneck on the Playstation 3 and Xbox 360, which is why SSD's didn't provide much in the way of tangible benefits, that bottleneck has been rectified next-gen, which is what Tim's messaging is all about, removing bottlenecks.

The PC still has the fastest CPU, GPU, Ram and SSD's, but the Playstation 5 doesn't have any points of restriction essentially.

The PC has the fastest SSD's money can buy, yes RAID is one way to achieve such throughput's, no... That isn't the only kind of SSD that is available.

The fastest single SSD is on PC, was always on PC, will always be on PC. -Why?
The PC isn't limited by cost, power consumption, form factor or interface.

But that isn't the messaging that Tim is trying to put across, there is so much behind the SSD that is going on with the Playstation 5 that the raw "GB/s" numbers don't tell us.
It's like people clinging to "teraflops" to assert that a platform is 50% superior than another one which couldn't be further from the truth... Or how a 32bit console is faster than a 64bit one. - Bits tells us bugger all.

If you buy a PC today... In 2020 that came with a mechanical hard drive... Then you made the wrong purchase decision, even netbooks have SSD's today.

I haven't seen a PC for sale in a few years that came with spinning rust unless it was a secondary storage drive, but that is Australia, things might be different in other parts of the world.

The video got trending on Youtube LOL. Sony and EPIC just got free marketing LMAO.

As they say there is no bad publicity, and sometimes it turns out real good.

He is mainly apologized for personally attacking Tim and saying Tim must have received trucks of cash from SONY to hype up their SSD. Worse yet, he has one of the biggest and most watched YT Tech channels out there, you'd surely could see why mischaracterizing Sweeny the way he did deserves an apology?

"No reason to apologize" is baffling to say.

To be honest, I never rated Linus' technical knowledge very highly. He seems like someone who knows his way around the a few websites to order computer parts, but does he even have a computer science degree? Has he worked as a software developer? Does he work on Linux in his spare time or something?

That's why Sony has it's class when it comes to PR. They might be arrogance but they are leader on video games industries after Tencent and bigger one on dedicated home consoles.

They just let people arguing and made drama , in the end people who made drama just embarrassing themself.

Just look on how PS5 reveal, it was just only a logo the Internet took a storm and then Mark Cerny did presentation (and forum dweller mock that) and suddenly boom Unreal Engine came out without even need  Sony logo or Playstation add at all or not even Sony the one who reveal that.  just look how many view it has on Unreal Youtube channel. They did less and even started bad, but they gained a lot attention like always.

The power of brand.

It's a pretty informative video, since it explains why "this PC SSD is faster than the one in PS5" comments are not understanding why those SSD's don't come close to doing what the PS5 SSD does.
But most of this will be for first party games. Some for games also on Xbox, and very little if they're also on PC.

"Unless they're also releasing on PC. The PC might be about to become the lowest common denominator here." 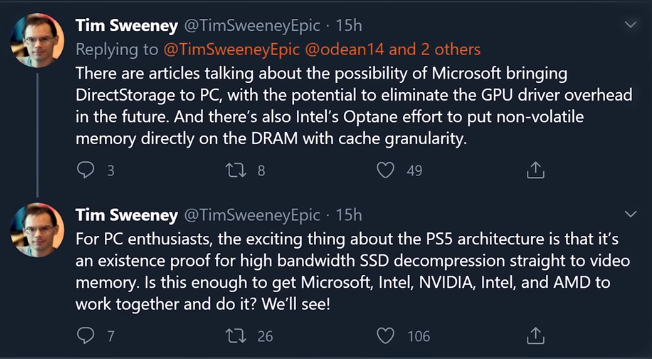 Would be very beneficial to the games industry if this, or equivalent technology is standardized on PC and Xbox.