Was a SNES guy. I played Sonic 2 over friends as a guilty pleasure. I always found the controller weird yet cooler. But all the kids preferred the platformers and RPGs on Nintendo

I grew up poor. Didn't have much until a friend of the family bought me a Genesis. Funny thing is most kids wanted a SNES like me and that's why I ended up with a Sega. I was Sega fanboy by default even though my heart was with Nintendo. I convinced a friend once to trade his GameGear for my GB which was unheard of at that time. Regretted that. Then years later...I went to purchase a PS and they too were sold out so I ended up with a Saturn. Segas in my blood now and even though I'm well aware of which company delivered a better overall experience...I'll defend Sega til I die.

Yeah but even you have to admit that the little blue rat was never actually faster than Mario.

edit: can I just confirm that we won't get banned for 30yr old console/computer fanboy warring?

I just had a SNES. I knew maybe one person who had a Mega Drive. Never experienced any war tbh.

In retrospect it was certainly one of the most epic console wars to date, with both sides going to great lengths to one-up each other, from Sega's aggressive ads to key games like Sonic or Donkey Kong Country becoming wonder-weapons designed to single-handedly torpedo the opposing system.

And for most of the generation it was a close-run race as well, with Sega making the most of their head-start and Nintendo only pulling decisively ahead towards the end.

I still think no other console war was quite as classic.

No issues with that.

But the 16-bit generation as a concept was a major part of the marketing push from Sega against Nintendo. Since the first third to half of the 16-Bit generation was Mega Drive vs. NES. SNES came in much later, and when it did it was too little too late, I think Mario World wasn't as well received as it could have been because the perception was that Super Mario 3 was the better game, that Mario World was a cosmetic update + Yoshi - and that didn't impress nearly as much as Sonic, the bigger and nicer looking sprites, the hipper sounding music, and the faster more varied level design. Not only that, but Streets of Rage SLAUGHTERED Final Fight. While SNES did have an initial boom of success, it eventually became the butt of jokes (I know, I was a massive fan of Nintendo).

The next major battle was Super Mario Kart (personally, I was enjoying the hell out of RPGs, the importer/RPG fanbase in Europe was really hardcore in the early 90s, one of the earliest things that happened in regards to videogames on the Internet was translation walkthroughs for games like Fire Emblem 4 and Dragon Quest 5. But, even though Mario Kart was big, it was also mocked pretty hard. I think this was the height of the battle of the system wars of the time. It was also when Nintendo was losing the hardest in the 16-bit generation.

Then, DKC was revealed, and it all changed.

DKC was Rare's messiah game for the SNES, it is literally the one that WON the war for Nintendo. It's importance in the 16-bit era cannot be understated.
- the impact of that game CANNOT be understated. It wasn't the last time either. For the last few years of the 16-bit era, Nintendo went from being the loser console to being the massively superior one.

It felt like a very long time, but in retrospect it was fairly short lived.
The most major blow to Nintendo was losing Square, but it wasn't even to Sega, it was to Sony.

N64 got overrun by PSX afterward, but Rare saved it from obscurity with games like Banjo Kazooie, Diddy Kong Racing, and (especially) Goldeneye 007. From 1994 until Ocarina of Time's 1998 release, Rare was perceived as being better than Nintendo. GE007 was, again, like a messiah for Nintendo. Only this time it did not win the generation for them. Nintendo lost to Sony in the 64/32 bit generation and again, the N64 felt like the loser console - but no Nintendo console EVER (not even the Wii U) was perceived as a loser console as much as the Gamecube (often nicknamed, "the Gaycube" at the time, which sounds silly today - but it was a console that everyone except kids was kind of embarrassed to own). Luckily, Wiimania really changed all of that for the better, and I think Wii U didn't suffer the same "loser" status as the Gamecube, despite being a poorer machine, was because the Wii kind of broke the perception that Nintendo was down and out, also the thriving handheld sector became much more apparent after the DS Lite came out.

Nintendo fans got ballsy with teasing Sony during the Wii era. It's the first time Nintendo had a console that felt like it was made for adults looking for something fresh. I wish I could convey just how huge Wiimania was, there was and has been nothing like it before or since in gaming history (think Donkey Kong, Mario 3, Ocarina of Time hype, and quadruple it, then double it, and then keep that going for about 3 years). People lined up in front of retailers every night, all through the winter, all through the Spring, and in the summer you could still catch people camping out in front, and it only got worse come August and the next holiday season... if that sounds nuts, it was nuts.

I lived through that era. I was 11 years old when the SNES was released. Yet all throughout middle school and early high school prior to Gen 5 starting, I don't really recall any people my age getting confrontational about it. In my experience, the console wars were basically just Sega making a bunch of commercials that amounted to little more than attack ads. If there were kids at my school arguing about it, I was not privy to it. Then again, I held no animosity towards either Nintendo or Sega, and I owned both an SNES and Genesis (I preferred the SNES, but the Genesis was still a great system).

I remember it well. However, I had both systems. And, aside from light bullshitting, I never saw any serious fighting between fanboys.

Portable was no issue, we were young, pc's were light, monitors only 14inch, couple boxes of floppies, a power bar and you're all set.
Over time it grew from this 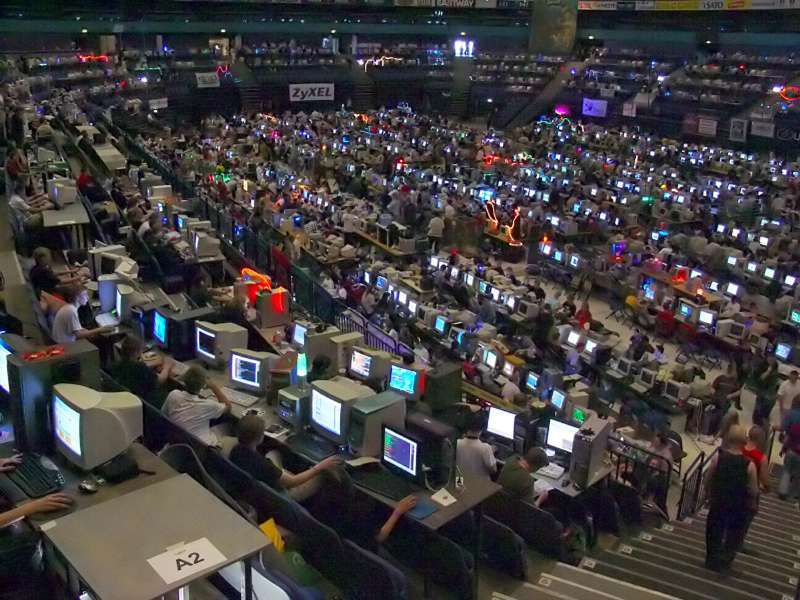 While you console kiddies were enjoying street fighter 2, we played Civilization through the night, Wolfenstein 3D, F117A, Falcon 3.0, Dune 2, Alone in the dark. And on Amiga 500 Another world, Lotus turbo challenge 2, Monkey island, Populous, License to kill and so many others. Fire power was a favorite vs game, Budokan the preferred fighter. Street fighter came to pc and Amiga as well, but I don't remember playing it. We played Golden axe a lot though, hardly every made it to the end since we always ended up fighting each other :)

Before PC/Amiga we were on MSX and C64 (at a friends house), loading tapes yup. And copying them on dual cassette decks. PC as well, but the early days of PC were bleeps and ugly colors. Still it got the most attention since it was so easy to get games for PC. My dad used to bring them back from work, mostly Sierra games until I got onto BBS and started downloading games.

Consoles were all right too, my nephews had Sonic and Mario, always fun. Yet, no cheat hacks, can't edit the save games. PC had everything, Amiga had a game shark thingie, edit the game memory while it's running to track variables like lives and money to edit them on the fly.