Here's a creator that I came across recently that you may want to follow.  He does a lot of speedrun and technical courses that are probably more in line with the skill honing you are looking for.

New Course uploaded this weekend and updated OP.  I had posted a teaser a few days ago that I was working on a "Deluxe" version of "Mario Maker Kart Quadruple Dash" course now that it had officially crossed the 1,000 Players mark last week.  So, I set about creating a completely new and longer "track".  This one takes place across 2 Laps, but each Lap is it's own track.  The 1st Lap has each player confined to his/her own lane.  The 2nd Lap opens this up to a free for all, with the player in the lead car able to leave obstacles behind to slow down opposing players.

Description:  Another Mario Kart inspired level designed with multiplayer mode in mind.  There are 4 available "karts" (Koopa cars) and the ability to activate an obstacle in your opponent's paths along the track.  This course was created to celebrate the milestone of my original "Mario Maker Kart Quadruple Dash" course reaching 1,000 Players.  As such, the course is a 2 Lap Championship Cup held in Bowser World.

New course uploaded over the weekend and updated to OP.  With the news that the Super Mario Maker servers would be permanently shut down on Wii U on March 31, 2021, I had decided to create and upload a few last courses into the old game before that happens.  I hadn't spent nearly as much time in the original Super Mario Maker, or created anywhere near the amount of courses that I have on the Switch, but I did enjoy the game very much all the same.  So, I created and uploaded a couple of courses earlier this month to show my appreciation of the original.  The first course was a simple and original concept that also celebrated the start of a brand New Year, so I had it in mind for also uploading to the Nintendo Switch as soon as an opportunity presented itself.  I'm currently working on 2 retro themed courses, neither of which is finished, so this weekend seemed as good a time as any.  Since I was very rusty at using the Wii U toolset, I completely neglected creating a sub-world for the course.  And so, I fleshed one out in this Nintendo Switch version.

The second course I created is a Wii U version of my Power Punch-Out 3!! courses.  Since I already have the original and deluxe version in Super Mario Maker 2, there is no reason to upload a copy of this Wii U version at any point, even though it stands on its own as a unique version from the others.  One of the things that makes it even more unique is that I was able to use my Little Mac amiibo so that you actually play as Mac throughout the course with the costume mushroom powerup.  This not being a feature in Super Mario Maker 2 gives even less reason to copy this course over to the Switch.

Description:  Enhanced version of a simple course that I created in Super Mario Maker on Wii U at the start of 2021 to get some more courses uploaded to the old game before the server shuts down for good in March.

New course uploaded last night and updated to OP.  It's been about 2 months since the last time I created and uploaded a new course in SMM2.  That isn't to say that I haven't been working on anything new.  I actually do have 2 more courses that I have been tinkering with for a while now, but I have not finished fleshing them out while I've also been putting time into playing and completing other Switch games.  Some fellow SMM2 players and creators have been urging me to come back though, so SMM2 never strays to far from my thoughts.  So at some point yesterday, the idea popped into my head for Mario participating in a battle royal against his foes who enter the ring at intervals via different speed pipes.  The most important foe to defeat though, is the reigning King of the Ring, Boom Boom.  However, he does not descend into the ring until a Podoboo traverses across the top of the arena to ignite a Bob-omb, whose explosion activates the On/Off Switch that will release Boom Boom from his cage over the ring.  This entire mechanism takes place off screen and is my first attempt at using this kind of setup.  Boom Boom holds the Key that is required to escape the ring and finish the course.  Mario is delivered to the ring via a constructed platform on tracks similar to the method a first attempted with Ground Control to Major Tom 6000.  Mario obtains an SMB2 powerup while entering the ring.  This gives Mario the ability to grapple and throw his opponents rather than just stomp on them.  Due to how chaotic the action quickly gets with the multiple pipes flooding the ring with enemies, another pipe constantly replenishes Mario with this powerup to survive until Boom Boom's arrival.

Description:  Mario enters an all out battle royal.  Can he dethrone Boom Boom as the King of the Ring?

New course uploaded over the weekend and updated to OP.  This is one of the courses that I mentioned I had been working on for a while now.  I was able to put some time into it this weekend to finish it up and polish it before uploading.  While working on another course, I began creating an elaborate "title card" screen for it involving pixel art.  This led me to think about creating a complete course based around pixel art, rather than just one screen of it.  As usual, rather than just follow the pattern of other pixel art courses I have seen, I was determined to put my own spin on it.  The idea I came up with was to create an interactive NES Guidebook.  For each game, I used one screen to create a large "screenshot" of the NES game and then posted my own comments into the screen detailing info and tips about the game.  On the next screen, I recreated a smaller version of the previous screenshot that the player would actually play that screen of the game.  Next to this play area, I added the initials of the game accompanied by my own pixel art versions of characters/enemies/or items from that game.  Due to the limitations on available doors, I was limited to a total of 7 games (could have been 8, but I used a set of doors for the large sized Elevator Action screenshot).  I'm thinking of recreating a version of this course in the original Super Mario Maker on Wii U using Amiibo costumes before the server closes on 3/31 (2 days from now!).  One of the inspirations for this course, and for the course title was "The Official Nintendo Player's Guide" that came with the NES that I got for Christmas in 1988. 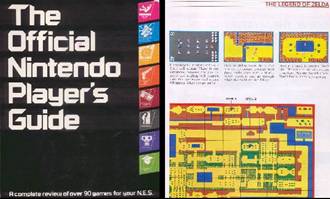 Description:  Explore an interactive NES Guidebook featuring 7 games released on the Nintendo Entertainment System.  Each game is covered by a two page spread with a large screenshot of the game accompanied by info about the game (game title, developer, year of release in North America) and tips on how to play on the first page.  The second page features artwork from the game and another smaller but interactive screenshot from the game.  The featured games include:  Mario Bros, Super Mario Bros, Pac-Man, Elevator Action, The Legend of Zelda, Kid Icarus, & Super Mario Bros 2.  Now You're Playing With Power!

New course uploaded earlier this month and now updated to OP.  This is another of my retro themed courses.  This one pays homage to Q*bert.  I tried to see how close I could come to recreating the arcade classic with Super Mario Maker tools.  I constructed 4 Pyramids.  Each Pyramid increases in difficulty due to the appearance of varying hazards symbolizing classic Q*bert enemies.  On Pyramid 2, I used the Spike Ball to represent the Bad Balls which bounce down the side of the pyramid and harm Q*bert upon contact.  On Pyramid 3, I used Spike Shells as Coily.  And on the final and most difficult Pyramid, Q*bert must contend with Bad Balls, Coily, and an Ugg that I used a Horned Ant Trooper to represent.  I placed a coin on every pyramid block that must be collected for the end of stage Flagpole to be present.  This was done to symbolize that Q*bert had touched each block on the pyramid (changing the block colors in the original version).  I used the Super Mario 3D World theme in order to utilize the Warp Boxes as the Flying Discs that can be used once each to return Q*bert to the top of the pyramid.  Over the Pyramid, I crafted a mechanism to return Q*bert to the top block of the pyramid in a way that would prevent the warp boxes from accidentally interfering with one another.  I also did some Pixel Art of Q*bert at the beginning of the course for the "Title Card" and again at the end near the flag pole where a "Bad Ball" drops on his head and you are meant to hear a version of his trademark exclamation.  I might explore another shorter and simpler version of Q*bert using blinking blocks to represent the color change at some point in the future to add to my "Easy Mode" series.

Description:  Play as Q*bert and hop up and down Pyramids while avoiding Bad Balls (Spike Ball), Coily (Spiny Shell), and Ugg (Horned Ant Trooper).  Use the Flying Discs (Warp Boxes) to return to the top of the pyramid.  There are 4 Pyramids to complete, each one with increased hazards.  Pyramid 1:  No enemies.  Pyramid 2:  Bad Balls.  Pyramid 3:  Coily.  Pyramid 4:  Bad Balls, Coily, and Ugg.  Each pyramid block must be touched by Q*bert (coin collected) to complete the game.

New course uploaded recently and added to OP.  I was on vacation earlier this month and showing some of my courses to my nephew who I hadn't seen since 2019 due to the pandemic, when I noticed that I had crossed the 1500 Likes milestone.  To commemorate the achievement, I decided to upload a course I had created a while back, but never uploaded.  I had started work on creating a Super World in the April of 2020 following the March update that added the feature to the game.  I intended to create all of the courses first and then upload them all together when uploading the finished World.  However, I only ever finished creating 1-1 and 1-2 of the stage that I planned to call Mushroom Valley, before I instead opted to create a Super World of my already finished courses.  To stay on theme, I only used courses that were recreations of retro games.  This late in the game, I probably won't attempt to complete an original Super World, unless a Super Mario Maker 3 releases.  I'll hold Mushroom Valley 1-2 to upload at a later date.