Been meaning to play this one for a long time. I was actually on the verge of purchasing the game physically before Sony offered it for free through PS Plus. I put that money towards The Last Guardian instead. Anyway, I heard so many great things about Shadow of the Colossus. I am glad I finally played the remake on PS4 where the game is not held back by performance limitations. The design philosophy is intriguing. 16 boss fights, each one of them epic, each one of the unique. The sense of scale was staggering. The first flying Colossus was my favorite. Being flung up high into the air and desperately trying to grab onto part of it before falling is one of the most vivid gaming moments I have ever experienced. The desolate game world littered with signs of a lost civilization was interesting to take in even though the game does not encourage much exploration. Finding the Colossi could be quite frustrating when the light ray points you in the wrong direction. For most of the boss battles it is fun and fair to figure out the appropriate strategy to take them down. Certain battles thought feel very obtuse and needlessly difficult to figure out. The upgrade over the original PS2 graphics are welcome but the game feels quite dark and the colors washed out. This is the third release of this game and they still have not added anything significant in the way of new content such as additional Colossi to fight. I think it would have been cool to battle two monsters at once while they fought each other. The story is straightforward but quite sad. I sympathize with Wander. Nice while it lasted but I do not feel the urge to revisit this game.

Finished Far Cry 4, and it's Valley Of The Yetis dlc. Stinky garbage. F*** Ubisoft. F*** Uplay. I hope they continue to lose money as they have been recently, go out of business, and are remembered for being a terrible publisher, because they are a terrible publisher.

Monthly Update: Over the past month I have beaten Call of Cthulhu, The Last of Us, What The Golf?, Journey to the Savage Planet, and the original Crash Bandicoot (which I rage quit after dying for the millionth time on The High Road. xD). I am officially tied with last year, where I beat a shit ton of Kingdom Hearts games at the beginning...and not a lot else near the end. xD

Call of Cthulhu: I don't really play many horror games or detective games so I don't have much to compare it to but it was a trippy experience. I wasn't able to unlock 1 of the endings due to my choices in the game overall had a good time. This was technically a holdover from last year but I was only about halfway through the game.

The Last of Us: Great story, really felt excited about the sequel coming soon! Overall, I still prefer playing Uncharted because the gameplay is more fun and shroom zombies aren't really my thing normally. It was definitely worth the journey. I just need to play the DLC and I'll be ready for The Last of Us Part II. I definitely enjoyed playing the game more stealthily than jumping into every fight.

What The Golf?: It reminded me a lot of Katamari but somehow even more ridiculous. Definitely worth the money. I was planning on playing just a few minutes here and there but ended up playing through the whole game within a day (pretty much nonstop).

Journey to the Savage Planet: I don't know how to describe this game other than taking a bit of snark from Portal and Metroid Primes essence. As you play through and get more upgrades, the game becomes more and more fun to me. I collected everything I could but I still didn't platinum it. I finally realized that I put too much focus on being a completionist but I had fun trying to find one last animal to scan or one last bit of orange goo to eat.

Crash Bandicoot: As previously mentioned, I rage quit SO CLOSE to the end of the game. I'm glad I decided to pick it back up though! I'm going to start Cortex Starts Back some time soon.

That wouldn't happen, it goes entirely against, you know, the point.

Night in the Woods was a pretty impactful one. Great characters, amazing writing. Great soundtrack. I wish there was more of it. Gonna go back and replay it eventually as I wanna see what the other route looks like.

Nonsense. It's a videogame. There are no rules. It would have been epic and mix up the formula of find monster/slay monster/repeat. 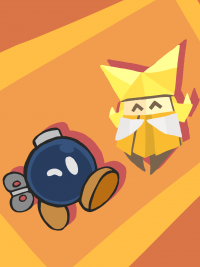 Played a looooooot more AC:NH since last update, it's a fantastic game. I'm happy with my island as is for now, I'll jump back in for the next update though. I just beat my first XCOM 2 campaign and loved it. I'd played about 10 hours on PC and double-dipped for Switch portability, well worth it. Runs beautifully on the Switch, and I can see myself coming back to this many times.

AFL Evolution got a couple more patches over the past two months and it is soooo much better! Runs so smoothly on the Switch now, no audio issues nor buggy animations, loading times have been slashed again as well. The post-launch support has been fantastic. It feels so great to play now, I'm gonna get back into my season ASAP once I'm done with Bug Fables.

About 5 hours into Bug Fables at the moment, I'm not enjoying it as much as the early Paper Mario games due to my lack of attachment to its world, but it is oozing with personality. It nails the PM aesthetic whilst not being derivative, and its characters have a whole bunch of charm. Really liking what I've played so far, looking forward to continuing on through it.

Clubhouse Games has been fun too. Trying to really get acquainted with Hanafuda, Chess, Mahjong and Shogi, having a lot of issues getting strategy down pat, but I'll get there. Really enjoying the package they've put together here.