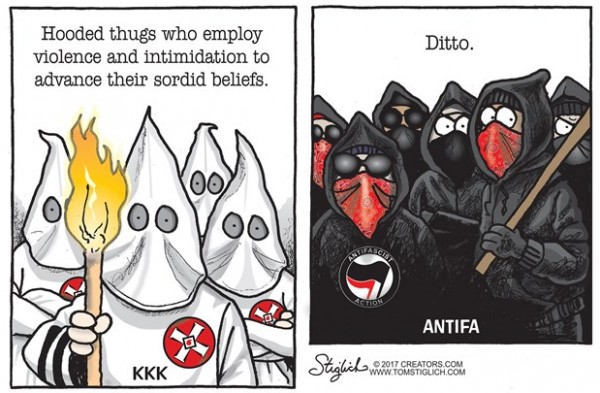 If I understand your question correctly, you are asking me if I would apply the same standard to fundamentally different situations. You are also asking me to deliberately ignore relevant information and context.

The fact that you frame your question in such a way should give you a hint that the situations you attempt to compare are not the same.

I would not apply the same standard, because if I did, I would run into the problem that I would also have to respect/praise any given far-right group for not being intimitated by an announced counter-protest of Antifa, and pushing for their ideals in the face of adversary.

So the question I ask you in return is this: Do you look up to far-right groups because they aren't intimitated by Antifa and go through with their protests?

Good job here focusing in on the categorical imperative of the action.  As Kant shows us, in order to properly judge the morality of an action the non-core details need to be stripped away revealing the categorical imperative of act, which is where we can evaluate morality. For example, the categorical imperative in the case of the topic of this thread would be: "it is OK to physically assault people who have done objectionable things in the past."  This is an accurate way to frame the argument that Antifa is making in support of their actions, while stripping away the sensationalism and emotion associated with terms like "far right."  The next step is to then apply this imperative to all of society and see if it results in a reasonable and functional social order.

In this case, it clearly does not: if anybody could physically assault somebody who has done morally objectionable things in the past then we would have a society where physical assault is universally OK as every single human is guilty of at least some fault.  Such a society is not something that any rational person would desire.  Based on this analysis, I have to conclude that Antifa's behavior is immoral.

"You also had some very fine people on both sides."

And Antifa claims to be "anti-fascist" (although technically they can't be fascists by the very strict definition of fascism) but nevertheless they use similar tactics utilized by actual fascists. So you really can't trust what these extremist groups say about themselves, their actions speak for themselves.

The Proud Boys do have an incredible amount of white nationalists on their side already and an overwhelming majority of them are misogynistic white males who believe in "white genocide" being a real thing. What they mean by "anti-racism" is that  they view more representation and protection for poc/minorities and their culture as perpetuating "white genocide" and as being "anti-white" and therefore racist. "Anti-racism" sounds good on it's own but they're using it to stand for something different.

My opinion of them is the same with Antifa, they're dangerous extremist groups that use political violence as a tool to spread their message. I don't agree with their actions, they're not civilized groups. I came to this conclusion of the two groups from various sources of info (both online and irl) and from being politically active irl.

SMDH on some of the stuff that people post on here ...

With this mindset, it's no wonder why Europeans have a history of weak institutions and are more likely to fall into political disrepair as anyone with two eyes can see with both world wars ...

Freedom of speech and rule of law should mean that EVERYONE is compelled to ALWAYS TOLERATE the INTOLERANT because failing to do would mean that no one is deserving of peace whether it'd be antifa or the neo-nazis since there would be a never ending bipartisan civil war along the political lines ...

Challenging these two basic institutions is an affront to the lack of understanding in their necessity to developing self-sustaining peace ...

I think you forget the influence Malcolm X and the Black Panther Party had in the civil rights movement. The sad reality is that in order to achieve progress, sometimes violence is needed.

I don't think you realize how sinister people who align with the far-right can be. For example, there's a book publisher in Germany who focuses on publishing material that fosters far-right ideologies, but he isn't a member of the far-right political party AfD. However, he gives speeches on seminars for AfD members to provide them with ideas how they can reach their goals. That guy can always say that he isn't with the AfD, but he certainly does everything in his power to fuel the mindset that powers the AfD. He is also someone who likes to provoke in public spaces, and if attacked, he doesn't punch back. That's because he knows that taking hits allows him to frame the situation in a way that makes him a victim.

You want Ngo to be perceived as just an ordinary journalist. You don't like it that I and others have looked at the articles he publishes and you call it character assassination when it's pointed out that Ngo aligns himself with the mindset of the far-right or close to it. Ngo isn't remotely close to the German example I mentioned yet, but Ngo seems to aspire to become someone like that. That's why it's very important to be able to see more than a binary context of good vs. bad. And yes, all of this is on topic, whether you like it or not.