Here a bit of gameplay in handheld mode

Looks kind of like 7th gen graphics, but that's fine. The character models and stages look good, but the texture quality is low. The resolution seems low given the pixels moving around and post processing creating a soft image on top of that.

I was playing MKX to try out the DLC characters and I'm annoyed by the softness of the image, I don't like post processing effects that make the image so blurry. With that said, I don't like how soft this Switch port looks. I'm gonna play this on Xbox One X, but I wouldn't mind having the Switch version after its like $20.

Its a fighting game so i dont think its a demanding game. I mean tekken 5 was good on the psp and even street fighter 4 was ported to the 3ds 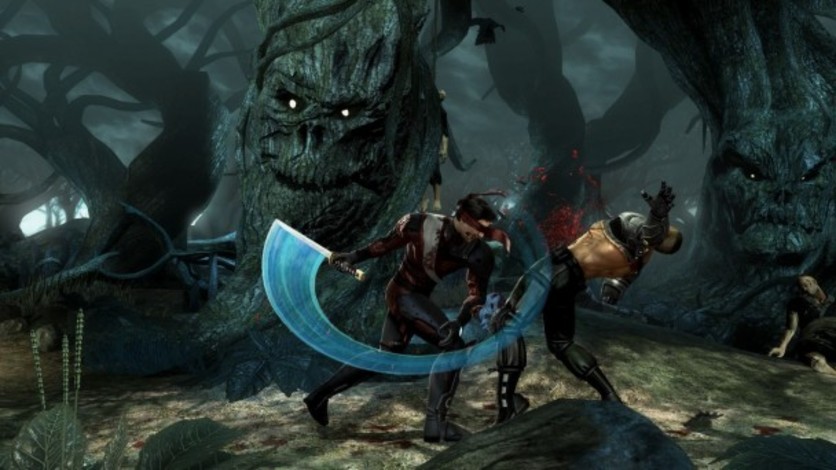 Agreed, in the sense this genre isn't as complex as many other genres. But it also depends on the engine the game is using.

I mean Tekken 7 and Soul Calibur VI seem to struggle on 8th gen consoles in regard to resolution. The base X1 especially which even lowers some graphics settings. DOA has been a technical marvel in past generations, but DOA6 was disappointing and only hits 1080p on X1X at 60 fps.

These NetherRealm fighters however have made the wise decision of sticking with Unreal Engine 3. Which seem to deliver good visuals at a higher resolutions and stable performance. Had this been built with UE4, there might not have been a Switch version.

Switch has native UE4 support and several games on the engine have been successfully converted to it such as Hellblade, Snake Pass, Fortnite, and Claybook.

I wonder if the Switch version will have Mario-related unlockables just for a laugh?

I knew somebody was gonna think I was comparing this directly to MK9. I'm not doing that.

MK9 (2011) is much older at this point but it was a polished game for the time. Around 2014 it seems games really started using more advanced lighting effects that added depth. I've said before I was really impressed with the lighting in Destiny even on PS360, that's where I started to notice other games look flat in comparison. CoD Advanced Warfare was also doing ambitious lighting effects on 7th gen specs.

I prefer the presentation of MK9 versus MK11 on Switch. Its sharper and the textures aren't muddy. MK11 on Switch just looks like a game scaled back with minimal effort, as opposed to a product built for Switch specs (which it is). Kinda remind me of Injustice on Vita. It was an impressive effort, but it doesn't feel like it was handled with care or tried to leverage the limited specs. These feel more like tech demos to me.

It's not the best looking game on Switch, nor perhaps even the best port, but I think the results are decent considering its a console game running on a contemporaneous mobile chip at 60fps.

One of the main things that make 7th and 8th gen games look different is the adoption of Physically Based Rendering on modern systems, something almost totally unseen on PS3/360. MK11 on Switch still looks like it includes this, which makes it look more like a product of this generation than the last.

Switch has shown in multiple cases it can handle modern games, albeit at a much lower visual fidelity. At some point though I'm not so impressed anymore and its just par for the course. MK11 on Switch is fine, these ports are now just looking like what I expect. People act like every new port means something, but they all kinda hit the same level. They play like other consoles with much lower visual fidelity (muddy/blurry). Sticking with UE3 helped as well I'm sure.

I'm curious to see Doom Eternal on Switch, but I think its gonna look exactly like what we expect, other id shooters but just a little more polished.

7th gen games ended when physically based rendering started to becoming the norm. Maybe that's partly why Switch ports need to reduce the resolution so much. Its interesting to see Switch doing these modern effects, but 7th gen games were generally not this blurry and muddy. Hence, I prefer games that look polished and sharp versus "modern." That's kinda the secret to 1st party Nintendo games. They don't push cutting edge graphics or effects but they're very polished and age well.

Lastly, Halo 4 on X1 arguably looks better than Halo 5 on X1. We both know Halo 5 is pushing much more advanced effects and assets, but Halo 4 is making less compromises that Halo 5 has to make like lower resolution, pop in, reduced animation frames, etc. In the end Halo 4 actually looks better just because it appears more polished. Hence, I'm fan of pulling back demanding effects in favor of polish.