Not to mention that many PC gamers have game collections that totally eclipse many console gamers collections even on this forum.
It's anecdotal, but thought I would just make that point.

IF gamers boycott the game because it isn't on Steam... Then the company isn't listening to consumers and it is their own fault.

It's the principle of the matter. - Not everyone wants a dozen programs to manage their game libraries... One of the big advantages of Steam was how it consolidated your entire game library in one, easy and convenient place.

Plus the Epic store app is missing some vital basic functionality... And in general is slow and clunky, if you are going to compete against the industry standard, you do need to actually be better than them before you force your draconian ways upon the populace.

-Dev makes a new game.
-Dev puts the game up for Pre-Order on Steam.
-Dev pulls the game from Steam and starts selling it on another store just weeks before launch.
-PC Gamers who don't like the Epic store, closes wallets with a boycott. (As they are fully entitled to do.)
-Dev blackmails PC gamers.
-Shit probably hits the fan.

It's not like that at all.
Keep in mind that Metro is primarily a PC franchise, it tends to sell and look best on PC and has a pretty dedicated fanbase... It simply doesn't make business sense to crap on that fanbase.

Vast majority of games I won't buy if they aren't on Steam (Exceptions if they are on GOG/Blizzard app), it's as simple as that, that is my consumer decision and I have and will vote with my wallet... More often than not if the game captures my attention, I will buy a second copy on console.

Yeah. They just weren't tactful in their approach... So I think an apology is going to be their next move. - But even then, I think the damage is likely done.

Which is sad... Because they make some amazing games that push PC technology.

As I highlighted earlier: 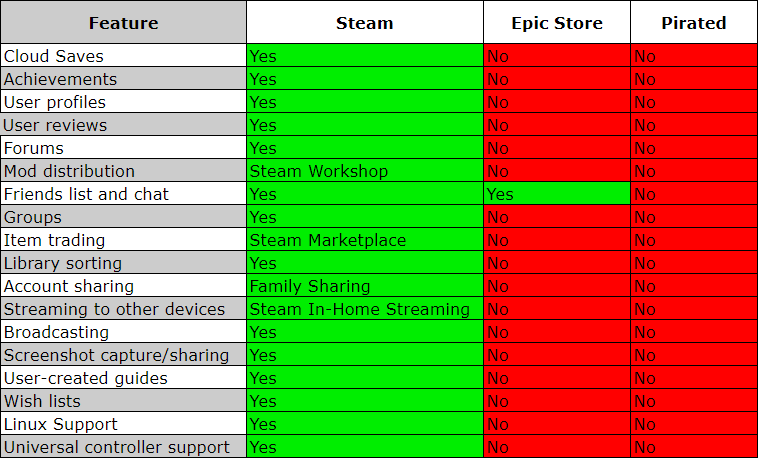 This is the actual context of using a different store you can't even play any game on ES offline for a start.

False equivilency here. People had to buy $300 consoles to access those games, while this situation is just a matter of switching to a different storefront on PC (which is totally free, by the way).

Wow, that's kind of an asshole thing to say, following kind of an asshole move in announcing exclusivity to the Epic store only weeks before launch. This will probably in and on itself cause boycotts and may well end up becoming a self-fulfilling prophecy.

So how much did you spend on console games in the last year(s)?

What I'm about to write is contextual in part to what was said in the previous thread on this matter.

It isn't a false equivalency. For one, I already admitted that they aren't a perfect equivalency in said quoted post. For two, things don't have to be either perfect equivalents or completely different to be comparable, there's a nuance there. They are still comparable because both are about the locking of games on platforms. I never said they were perfectly equivalent and in fact already mentioned said difference in my own post, so I'm not sure why you're replying as if the case was otherwise. If you think they aren't comparable at all then you are simply mistaken. A better response would be to say that the difference between both scenarios is enough for you to perceive them differently, but on that note ...

People already replied to your last post in the previous thread on why your assertion that gamers are entitled or that the Epic Game Store isn't a big deal is incorrect, but you didn't respond to them, most likely because you didn't want to have your opinion challenged. Even when you commented on a reply to your first post in that thread, it was to CGI, who you knew wouldn't push any arguments further. It comes off to me like you simply don't want to change your perspective on this particular issue, even though a lot of people have brought up valid points against what you are saying. If you looked at what I wrote in reference to the linked comment and said to yourself "Man, ALA is so wrong, he's acting like they are the exact same thing!" then you fundamentally missed the point. The point is, you write a lot about pro-consumer measures being good for the gaming industry pretty consistently on this site, but then defend and advocate for one that isn't pro-consumer in the slightest.

You said it yourself in the last thread, Epic Game Store is a "developer-oriented" store whereas Steam is a "consumer-oriented" store, but even that outlook in this scenario is flawed because it's not applicable to this situation. This deal really has nothing to do with developers, and is actually going to cause more harm than anything. The backlash, the lack of reach of the game, and the fact that the deal money probably doesn't go directly to the developers at all, are all reasons why this move isn't developer-friendly. It's publisher-friendly, and publishers are just the middle man of the gaming industry. That's most likely the exact reason why this developer made these comments, they're frustrated with a decision that will give them stress even though they didn't even have a final say in it. Now, is a better cut across the board good for developers? Absolutely. Will the money which Deep Silver acquired from this deal most likely trickle down to financial security for the developers? Most likely, although it can always be mishandled. But ... even with all that, the game is almost guaranteed to have made much more profit for the publisher and developer had it been on Steam, so there isn't any real positive upside. You don't even acknowledge the fact that Steam has already lowered their cut from games which make a lot of revenue either, which makes the claims about caring about cuts weird.

In the last thread, you said that you wanted Valve's monopoly to be broken up. Monopolies are primarily bad because how they affect consumers, and the gaming industry is competitive because it is consumer-based. Besides the fact that Valve doesn't even have a monopoly (it already has many strong competitors), it is not a good argument to support something that is anti-consumer to break up a monopoly. It is contradictory and very hypocritical. It's a conflict of interests. I also think that most of the people who aren't against this move are downplaying pretty significantly all the features which the Epic Games Store doesn't have. You can't even use a search bar on the Epic Games Store, and that's one of the most basic functions of a computer program.

If you want to keep supporting moves which aren't beneficial to consumers, that's fine. If you want to take things on a case by case basis, that's fine too. If you want to say that people are blowing things out of proportion, well ... that's fine for the most part, it doesn't necessarily conflict with being pro-consumer. But don't act like you're for pro-consumer moves, while lambasting people for advocating for choices which benefit the consumer. Don't preach when a company does something that benefits a consumer, but then get upset when people are voicing their opinions or trying to make choices which suit their best interests. Because that's what consumers are supposed to do.

Personally, I hope that Epic gets better features, and Steam gets better cuts for developers.

You may want to understand what an entitled gamer is first. While Steam users that preordered are still getting what they paid for, consumers of physical copies are getting screwed. They were told they were getting Steam keys. Now they are getting Epic Game Store Keys. So they paid for a Steam game and all of it's features and they are getting an extremely bare bones game. See the chart Wyrdness posted.

Expecting to get what you'd paid for is not entitled. The publisher is the entitled party. They think they are entitled to peoples money when they aren't delivered what was promised.

Yeah, uhhh, about that. Pretty sure that's about as toothless a threat that a dev could make. Metro is a PC franchise. There's no way any future Metro games would not be on PC.

Oh, can't wait to see what THQ Nordic is going to say about this gold nugget...my guess would be that, despite all the "Koch Media is independent in their decision making", there will be some heavy internal bitch-slapping regarding this type of shit.

Is this seeing if I actually buy games, or is this a point about how the PC players don't spend nearly as much. Insert joke about thievery here.