Forums - Gaming Discussion - How much did you pay for gaming this year? End of 2018 Edition

So another year has passed, time for an update of my annual spending on video games: 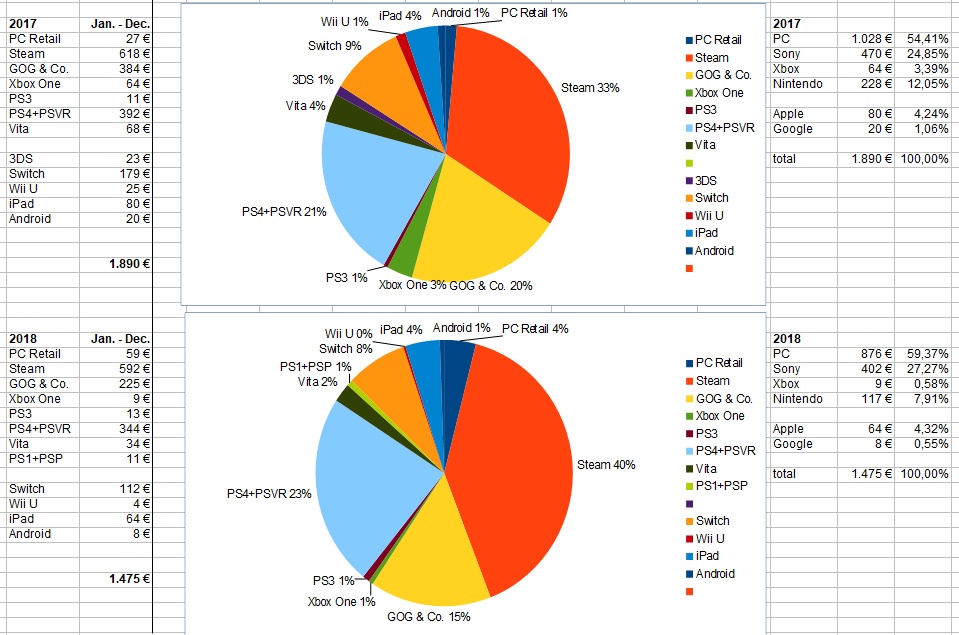 My PC share of the total software grew from 50% (2016) to 54% (2017) to almost 60%... and I didn't even spend much money on a single game, "Leisure Suit Larry: Wet Dreams Don't Dry" was the only one that costed more than 20 bucks. But there were so many good games on sale for €5 - €15 and the "Humble Monthly Bundle" subscription had an awesome value! The few months of "Viveport" were also an awesome value for PCVR games I played during the subscription time.

The most expensive PCVR games I bought were ARKTIKA.1, The Gallery 2: Heart of the Emberstone, Virtual Virtual Reality and Beat Saber.

My PS4 share (including PSVR) grew a bit again. Astro Bot: Rescue Mission, God of War. Detroit, Red Dead Redemption 2, Persona 5, Spyro Reignited Trilogy, Shadow of the Colossus, Moss, Gran Turismo Sport and the WipeOut Omega Collection were the games I spent more than 10 bucks for. The PS+ subscription also was totally worth it in 2018 for PS4 games (less for PS3 and Vita games).

I didn't buy any Switch games above 20 bucks in 2018... my most expensive buy was the Expansion Pass for "Breath of the Wild", followed by L.A. Noire, Final Fantasy XV: Pocket Edition, Golf Story, The Long Reach, Thimbleweed Park and Hollow Knight. Didn't subscribe or Nintendo Online in 2018, the NES games already bored me in the trial phase... if they add SNES or N64 games, I'll reconsider.

The only Vita game I bought in 2018 was "Danganronpa V3", but I also bought a few PS1 classics for it (instead of the PS1 mini console), f.e. Wild Arms, Metal Gear Solid, Twisted Metal and Destruction Derby. Most Vita games in the 2018 PS+ sub were mediocre, only Iconoclast stood out... so good riddance if they stop adding Vita games to PS+ this year.

I didn't buy any Xbox One games in 2018, but I had a 2 or 3 months XBL Gold and got some nice BC 360 games out of that for keeps. I also enjoyed the free trial month of Game Pass and am now enjoying a second GamePass month for €1, including the awesome Forza Horizon 4 (mainly on PC) and Celeste.

My only buy for the Wii U in 2018 was Super Mario 64... would have prefered to play that VC game on the Switch.

I bought no PS3 games last year, the listed €13 above are its share of the PS+ subscription costs. I bought no 3DS game either, cause I moved on to the Switch for Nintendo games.

I also bought a few Android games for the phone, but in most cases I have a better suited device close at hand.

You shouldn't have stopped at 900,i spent over 2 grand on new and classic games

The Ultimate, Gold, or Deluxe Edition of almost every AAA 3rd party game this year, most of the titles that came out for PSVR, all SIEWWS games, PS Now, every additional DLC that wasn't included in the season pass, every car available for purchase on Gran Turismo Sport, and a few PS3 and PS Vita titles. PSN will be a lot lower next year though, because I'm moving my 3rd party purchases to Windows Store and Xbox.  Only picking up titles like Ace Combat 7, with exclusive PSVR content on the PS4.

I got my PS4 this year, and beside God Of War, WipEout and Spider-man, I couldn't resist all PSN sales so I spend a lot of money in it. And also a lot on Switch games.

Not as much as the years before. Game Pass definitely helps keeping the costs down.

PC share is currently at a record high so far (over 70%), but that can change over the year with nice deals for console exclusives.

Time flies, we are already in the second third of 2019!

The biggest part of it (64%) is PC games again (including a lot of PC-VR games).

The Switch share has grown a lot from 8% to 22%... together with 3DS the Nintendo share exceeds 25% of total spending. A nice Amazon deal (5 retail Switch games for 100 €; I chose Diablo 3, Xenoblade 2, Captain Toad, Lego City Undercover and Pokémon: Let's Go) and my nearing vacation were the main reason for that.

Spending on PS4 games is taking a back seat for now, since I want to finish a lot of great PS4 titles first, which I bought in 2018 and 2017.

Spending on Xbox games will probably stay almost zero until Anaconda arrives. That said, I played a lot of Xbox games for almost nothing this year thanks to three months GamePass for €3 and two months of XBL Gold for €2. 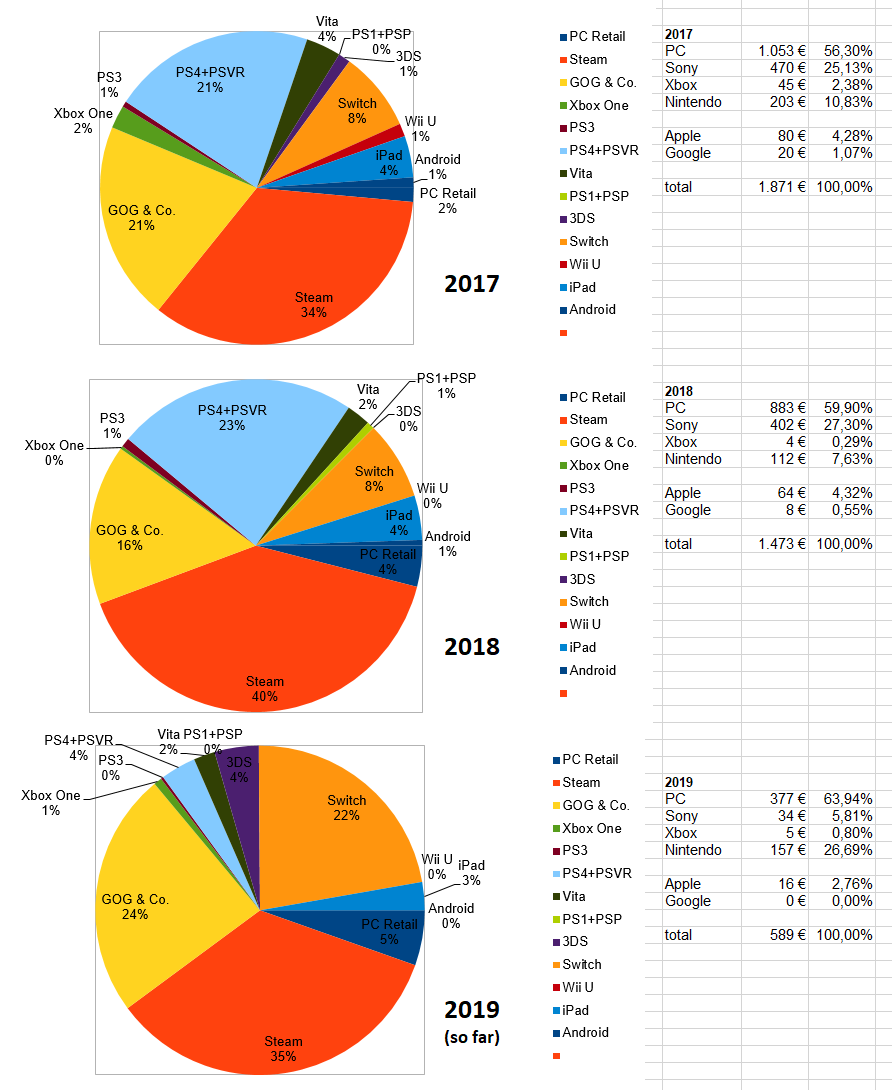