People can be happy that it outsells 3DS in the West while also saying it's fine if it sells less than 3DS in Japan. These things do not contradict each other.

Also show me one person who said anything about Switch selling as low as Wii in Japan because it's already on pace to destroy Wii sales there.

Look at Wii, it started out strong and had an amazing first year but it was short lived and had a steady decline in years 2, 3 & 4. Switch is having the opposite trajectory, it had a really good first year followed by a slightly better 2nd year and with games like Animal Crossing, Pokemon Gen 8, Fire Emblem, Yokai Watch, Dragon Quest XI, etc and a potential price cut/revision, its 3rd year should see an improvement and a much less severe drop in year 4. Switch is going to blow Wii out of the water in Japan.

Talking about Wii, Switch is passing Wii numbers next week, Switch will destory Wii sales in Japan, Switch will easily be 20m+ seller in Japan. Like you can see on graph, only consoles that are selling faster than Switch in Japan were DS and 3DS, and Switch (with its launch price point of $300) is selling great despite DS and 3DS sold better in same time period. 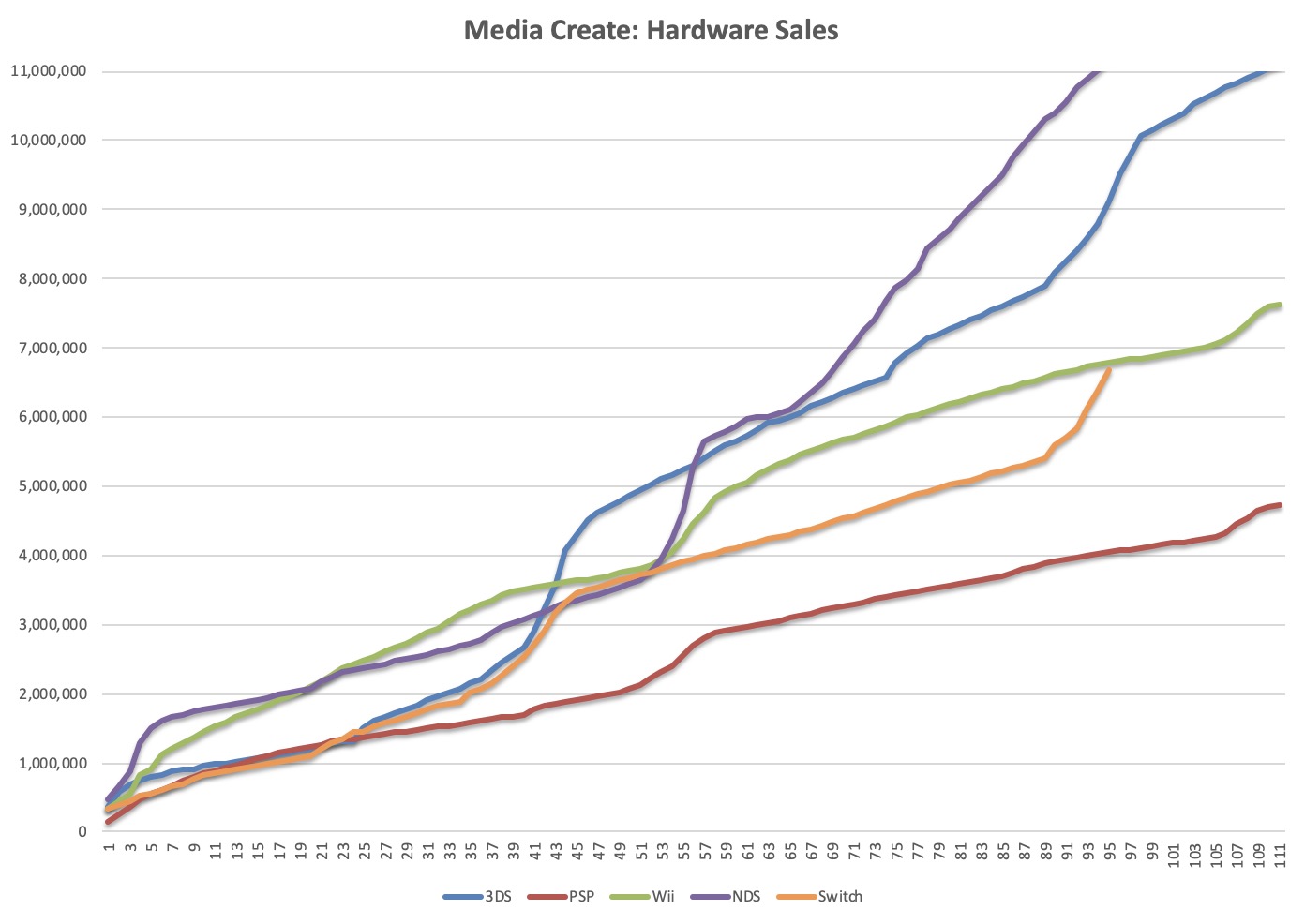 Correct me if I'm wrong but between the PS4 and Switch doesn't the PD4 still hold the record for most units sold at launch?

@miyamotoo
You always mention the 3DS price cut but never mention the huge games it got just after. Many believe Nintendo prematurely panicked and sliced the price of the console too early when it would have sold extremely well after the big games released.

Looks a lot like you want to claim to be right about things you've said in 2017, but unfortunately for you, there isn't a problem. That Switch will receive price cuts and revisions during its lifecycle was totally expected, so it not matching the 3DS's pace (a console that at this point in its life already had price cut and revision) is seriously not a problem. That you say that this imagined problem will become more and more visible over time makes absolutely no sense when everyone, including you, expects price cuts and revisions during the Switch's lifecycle, two things that will stabilize and prolong sales for years to come.

It's not a revelation that the number of people who are willing to buy Switch for 30k yen is lower than the number of people who were willing to buy a 3DS for 15k yen. Switch and 3DS have different sales curves, but when the circumstances of both consoles are considered, it's not farfetched at all that they end up with similar lifetime sales in Japan. The 3DS's early price cut and revision made sales more frontloaded while Switch's lack of those will result in higher sales in later years.

In any case, as far as I remember your main point made in 2017, Nintendo was supposed to bring a price cut/revision no later than in 2018 because of that lack of value as a hybrid console. But in reality, there was no rush to do either one of those two things.

It's absolutely valid and true. The 3DS made losses in its first two full fiscal years, so over its lifetime it only made that back and then some profit. Profit-wise, there's simply no contest between 3DS and Switch, because Switch has already won that in a comfortable manner and still several years of its life left. The 3DS's profits can't be accurately quantified, but any credible estimate will put Switch's first two years above the 3DS's lifetime because a graph of Nintendo's overall profits during all relevant years shows a huge discrepancy between those two generations.

It's not a contradiction. It's simply a fact that Switch beats the 3DS in every possible metric in America and Europe, so the primary metric (unit sales) unsurprisingly happens to be the one focused on the most. Unit sales are the only thing where the Switch is behind the 3DS in Japan, so the obvious answer to all the people who want to detract from Switch's success by using unit sales as the sole metric is to point out other important metrics, such as profits.

Additionally, there is really no good reason to be concerned if Switch doesn't beat 3DS's lifetime sales in Japan, because Switch will beat the 3DS everywhere else by a comfortable margin. As a quick example for argument's sake, if Switch loses to the 3DS in Japan by 5m while it beats the 3DS by 10m each in America and Europe, that's still a net gain of 15m; then someone might jump in and say, "But is Switch really a success when it sold just as much as 3DS and Wii U combined," and then reasonable people will point to profits where Switch sits $10 billion above 3DS and Wii U combined.

Nope, not at all. Not even in the slightest!

3DS needed a 70$ pricecut to sell, even in Japan where handhelds flourish. And after it's 2 first years, 3DS sales started to tank considerably.

While I don't think Switch will be able to keep up with the 3DS next year, I'm very positive it will outsell every year after that one, crawling closer and closer to the 3DS total sales. It's a Marathon, not a sprint.

Heh, 3ds at that time: $175, Switch at the moment: $300, see the different? It's amusing to see you forget or ignore this thing on purpose

You know I am sure Nintendo is really upset with the big problems they have in Japan. For example their complete domination of the Hardware and Software Charts every week.

There is no point to mention that because 3DS start selling great moment got huge price cut, and no, 3DS wouldn't be sold extremely well without price cut, $250 for handheld was too much in any case.

Didn't the price cut coincide with a huge game release followed by another big game soon after?

Congrats Nintendo! They officially have the largest relevant Install Base in Japan. This will do wonders for Third Party games going forward!