Forums - Nintendo Discussion - When will an improved switch-hardware be released ?

I thought you had some some single reason or good/strong points for such a thinking, but if you alaredy wrote those points and I already reply to you, than just ignore my previous post.

With the hardware flaws in the Tegra chips I'm sure Nintendo asks NVidia to iron these out first, and as a result should recieve a true custom Tegra chip

My expectation is somewhere around this:

2021. was way too late even before this rumour, buy 2021. we will have several Switch difrent type revision, for instance Switch Mini/Pocket and Switch Pro.

I know about the report, but a) It's the Wall Street Journal, who has been very wrong in the past when talking about videogame industry, and b) because I don't expect that to have upgraded processing power.

@bolded: for a mini, pro or pocket Switch, all need the same upgrade, otherwise the mini/pocket models run out of power after just one hour of gaming. In fact, those will probably come with the "pro" hardware, but clocked down to "base" processing capabilities to save additional power for them to be able several hours on less battery.

Sure, an Tegra X2 could do the trick, but considering the inherent massive flaws in the chips (just google Spectre and Meltdown) I'm damn sure Nintendo will want new hardware with those flaws eliminated, something that takes a lot of time to implement. Late 2020 is therefore the earliest possible unless Nintendo really accepts the X2 "as is" for a Switch hardware upgrade

I also don't expect necessary upgraded power, but Nintendo handhelds always had revision 2 years after launch, so 2019. was expected for revision even before this WSJ report.

Switch Mini/Pocket can be done even with current specs and whithout any upgrade, we talking about smaller screen and probably more power saving screen.

The 3DS is archaic, it's on the way out. In a few years it will be an irrelevant platform if it isn't already. (I don't really keep an eye on sales.)

Yes. Could be argued that it is feasible now.

Doubt it. The costs would be pretty big for a revision like that. I think Nintendo will just continue to use off the shelf components. Aka. Pascal.

Besides... The RAM will blow the costs out, Turing Cores isn't going to happen.
I also think you meant Mhz, not Ghz.
7nm will also be fairly expensive compared to a much more mature 16/14/12nm process, especially as capacity is freed up on those nodes as AMD/Intel/nVidia/Apple/Qualcomm etc' move to newer nodes.

Now if they intend to make a "premium" console along the lines of the Playstation 4 Pro/Xbox One X where cost isn't going to be a big factor, then sure. But Turing is still unlikely to happen.

The flaws can be mitigated to a certain degree.
Really depends how many resources Nintendo wants to throw at the problem.

The flaws can be mitigated, but it would cost the X2 so much power it wouldn't be much of an upgrade anymore, hence why I went with a custom chip. In 7nm, that chip shouldn't be any bigger than the X1 in the Switch, which is produced in 28nm, which means production costs would be about the same. Keep in mind I said 2021, by then the 7nm process should have matured enough, though there's still the possibility of a 10/12nm process (16/14nm would just be too outdated by then even by Nintendo standards imo).

RAM prices are falling again, and by 2021, DDR5 should be arriving. So I doubt 8GiB DDR4 by then would be more expensive than 4GiB when the Switch launched. While I didn't precise it here (I did so before in another thread), that upgraded Switch+ would be released at the same 299$ pricetag as the original Switch in my book.

And yeah, I meant Mhz. Muscle Memory, I suppose.

A chip built at 7nm and a chip built at 14/16nm that is the exact same physical size? It will be cheaper to manufacture on 14/16nm.
Wafer costs go up every time you shrink.

I think you might have fallen for the advertising ploy that is "nm" naming these days.
Whilst 12nm does have inherent advantages over 14nm at say... Global Foundries... 12nm is just a refined 14nm process, which in turn is a refined 20nm process.

At-least Samsung and TSMC changed their BEOL.
You are looking at probbal 10-15% gains going from 14nm to 12nm at most... And I think I am being generous there.

DDR5 doesn't equate to LPDDR5.
Ram prices may also increase by 2021... You only need a couple of factories to be taken offline from a weather event.

I was more or less pointing at the memory speed on a 128bit bus in conjunction with a doubling of DRAM.

You can have the Ram run at the same clockrate/Mhz as the current Switch and you would still more than double your bandwidth, so it doesn't make sense to drive up the memory controller which consumes power when you have already made massive bandwidth gains.
Or, Nintendo might opt for higher clocked memory but a smaller bus which brings with it a ton of cost-benefits like a simper memory controller, less PCB traces and thus layers, simpler power delivery... You know. The usual.

@bolded: That's why I said about the same, not exactly the same. Sure, the 7nm will be more expensive, but not by much.

@italic: Nope, more like the original meanings, like 16nm and 12nm being the full nodes while 14nm and 10nm being half nodes. GF calling their upgraded 14nm a 12nm process was pretty awkward for me in that regard.

That said, I don't remember seeing any ARM chip being produced in any 12nm process, they all seemed to go straight to a 10nm process. I doubt anything else than Ryzen+ will be produced in that process either.

@underscored: I don't expect DDR5 in any Switch revision. Just wanted to point out with this that when CPU transition to another RAM standard, the old standard generally drops markedly in price. Hence why I followed it with saying that by then 8GiB DDR4 shouldn't be more expensive then compared to the 4GiB when the Switch launched.

@bolded and italic: I have a feeling that the bandwith is already a bottleneck on the Switch, hence why I wanted to widen it more than the increase in GPU processing power. Switch corrently is only using LPDDR4-1600, resulting in measly 25.6 GB/s bandwith. I agree that going all the way to LPDDR4-2666 while also doubling the channel with to 128 bit is probably overkill (LPDDR4-2133 would probably suffice), but 83 GB/s would certainly be a safer bet for no bandwith choking than just going 128bit and keeping the LPDDR4-1600

Nope. 7nm will be more expensive, it's actually been a trend for a long time now. It will take a couple years for TSMC/Samsungs 7nm to be price competitive. 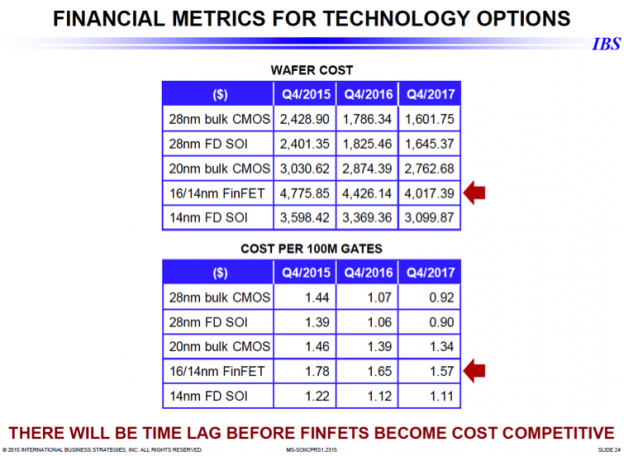 Global Foundries is even stepping away from 7nm entirely... Meaning less capacity and competition at that node than say... 14/16nm.
https://www.anandtech.com/comments/13277/globalfoundries-stops-all-7nm-development

But in terms of fabrication... The bulk of IC's are 55nm and larger, with production of chips between 90nm and 180nm being 27% of the semiconductor market.

The point I am trying to convey is that "nm" isn't actually representing an accurate geometrical size of shrinks.
I.E. Intels 10nm is actually in many aspects superior to TSMC's 7nm.

Ryzen is a large and profitable chip for AMD, so they can get away using a leading manufacturing processes.

All I am saying is that Ram is a commodity price so it will fluctuate wildly. 16GB of DDR4 for example today is more expensive than 32GB of DDR3 Ram I bought 8 years ago.

That is because the lack of bandwidth is a bottleneck on the Switch, the bandwidth it has is generally not doing it any favors at 1080P.

You are only looking at the raw bandwidth numbers.
The Switch actually has more available bandwidth than that.

In general... 50GB/s would probably be a good spot to be, it's roughly how much the Geforce 1030 has, which is a decent chip for 720P gaming. - Also find it not to be Bandwidth constrained either from when I did some overclocking testing.