I don’t know how you can say this when the eshop is flooded with new games.

Every time I go the eshop, I am completely lost because there are so many new games popping up all the time.

I simply can’t keep up.

Zelda literally won an award for e3 in 2016 and social media impact: 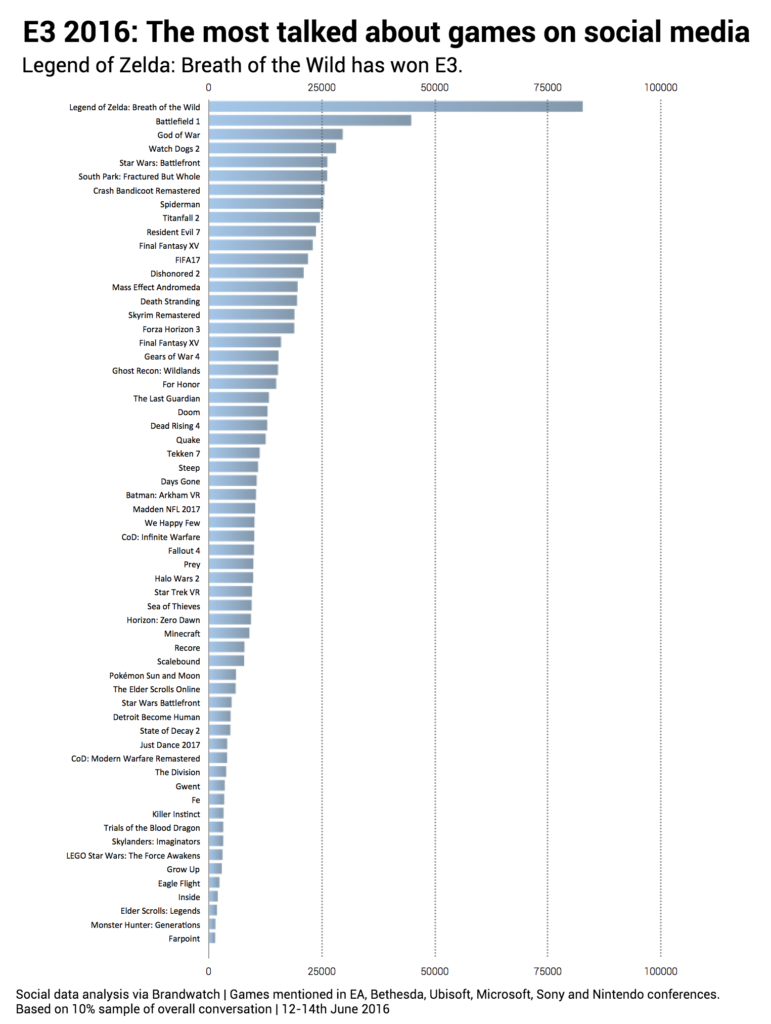 Is this "proof"? One game literally squashing everything else.

I expect even more for smash. As it's much bigger than Zelda with a very big hardcore fanbase.

It's more a stop gap for the slow Spring period.  Starting in June, there's Mario Tennis Aces, Octopath Traveler, Yokai Watch 4, Yoshi, Monster Hunter Generations Ultimate (in the west), Smash Bros, Fire Emblem, and Pokemon.  That's more than a game a month.  And that's just exclusives.  And that's just significant exclusives at that, not counting smaller ones like Sushi Strikers or Travis Strikes Again.  It's a similar strategy to last year.  March, April, and May were thin on the ground.  But June to December was a blitz.  They look like they're gearing up for the same approach.  But this time with more third party presence to help out.  And then they have some significant DLC as well, the Octo Expansion and the Xenoblade 2 story pack.

And all this before E3, they could have more for this year.

I'm actually skipping Redux though because it's not dubbed, meaning there's no reason for me to buy it over the original I already own. It's not too much better graphically, I hate the new art and cutscenes, I hate that they're adding a new character and story to a game that was complete without it, and if I have to read text, I'd rather read without having to listen to another language I don't understand the whole time. Blows my mind that they made all these stupid concessions in the name of "accessibility" except for literally the only one that actually matters.

This is the real problem. How many people here actually make attempt to play something out of your comfort zone? Stop waiting for name brands and take this opportunity to try something new.

I greatly recommended Ace of Seafood

I'm a bit different in that, while I started with Nintendo systems (NES, SNES, N64) I didn't switch to Playstation because I got bored of Nintendo's titles. It came down to the fact I'll take third parties over first party, because first party is rather limited in comparison. You have a few studios, vs dozens that can interest me with their games.
I usually don't even play Sony's first party games. After Uncharted 2 I got burned out on the series and haven't been interested in Uncharted 3 or 4. I play Gran Turismo once every other generation or so. (GT3 and GT5 so far) I didn't like the gameplay of The Last of Us, but the story was good so I watched a friend play it. I never played any God of War, and I didn't plan on playing this one either, until I heard/saw more about it. I will play it some day. But I have some games to finish first. (Persona 5, Nier: Automata, Monster Hunter: World, Yakuza 6 and Dragon Quest XI will be out in English by the time I finish those up I guess. And then there's Kingdom Hearts 3, and I still haven't played Final Fantasy XV either)

So the choice of my first console has always been simple for me. It's the one that has the most games I like. Which comes down to third parties because they have the advantage in numbers. NES and SNES were great in this regard. I was naive about N64 and learned my lesson for the future, in spite of having a great time with that system, no doubt. But I haven't really gone back to Nintendo again since then, aside from DS and 3DS. (And pretty much all my 3DS games are third party, except Fire Emblem and Zelda: A Link Between Worlds)
I always consider buying their home console, if "this and this" game comes out, and the cost of the system warrants the amount of games I'm interested in playing. So far I haven't picked one up, but I always hope this one will get me back in. And I think chances of me getting a Switch are higher than for any previous system. (Especially with the modding exploit, I can run emulators on it)

And if/when I do, I don't mind Nintendo churning out mainly the same type of games over and over, because I'll have a lot of other games to play.
And while I never got tired of Nintendo's games, I also never was the type of fan that played every single game they released. Hell no. Although for some of their franchises, like Mario Kart, mainline Zelda, Smash, I did. But I'm not playing the same Pokemon game every single generation with a minor adjustment to the characters and story. I get back into Pokemon every once in a while. I'm not interested in Kirby, Yoshi, Toad, Splatoon (though that game looks good if you're into that genre) the newer Star Fox games, all the Mario Party (those are fun on occasion) and sports games, etc.

But there are enough games there that I would like to play. Though if I was a Nintendo only owner, I would be bored right about now. But this is also why I don't buy new consoles on their first, or usually even second, year any more.

And what about the fact that the study is based only on the duration of E3? Because, right now, you can see that the God of War trailer from E3 2016 has 19.6M views on Youtube with 352K likes, while the Zelda trailer from the same E3 has 13.6M views with 208K likes (for further comparison, the E3 Mario trailer has 28.9M views). So even with the out-of-topic analysis of "which game had the most impact on social media", Zelda doesn't win.  But like I said, even if it did, it wouldn't be a proof of "Everyone agrees that Nintendo won E3", because there is no relation between the two statements.

And as usual, I think that a lot of Nintendo fans are overestimating Smash. It's a big game with a very hardcore fanbase, sure. But even on the 3DS, it's "only" at 8M sales. The best selling game of the franchise is barely at 13M on the Wii. It's nowhere close to a Mario or Mario Kart with 36M for example. So it will sell very well, obviously, but it won't make this year bigger than a Mario, Mario Kart, Splatoon 2 or new generation Zelda year IMO. Pokemon could, if they handle the changes well and don't disappoint the fanbase.

They dropped the ball by not having a true botw expansion pack - new areas with new characters etc. would keep a lot of people happy for a long time.

Essentially this. Even in the Wii's heyday, it wasn't like Nintendo was getting SNES-level like support from 3rd parties. They have always been about quality over quantity since the N64 days but I think it was easier back then because games did not take nearly as long to make. I mean Rare pumped out what, 10 games for the N64 at least in it's relatively short lifespan. If they were still with Nintendo now we would not see 10 Rare games on the Switch in the same given timeframe. We would see 3 at most.