I wonder how they get a free pass on stuff like this. 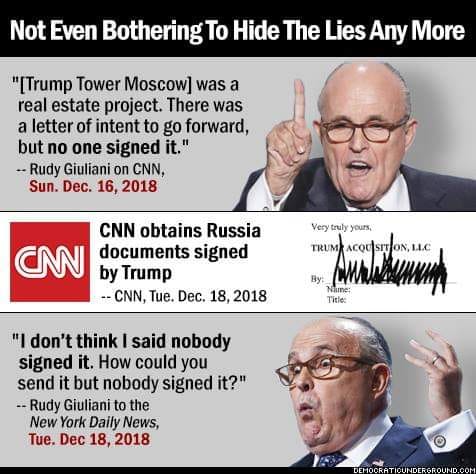 This has been the MO for the Trump administration since he ran for president.  Lie until you are caught, then when you are caught try to blame someone else for your lies.  Its really a PR campaign.  They will continue to lie to their base hoping they never see or read anything outside of either conservative news or fox.  They know they have those people hooked lined and sinkered where they will continue to believe everything is Dems, Left, Liberal or whatever excuse they want to use to get them to sleep at night never having to make a decision on just how bad they have been suckered.

What has he gotten done?  You tell me what he has he done so far because I am very interested to know.  So are you saying he looks like the boss.  Not really caring about the fictional other people but I am interested in your opinion of why he looks the boss.  Is it how he is handling his administration, world politics or domestic.  Just wondering about the things he has done that you believe makes him the boss.

As far as your second paragraph, not sure who ever said that.  Any idiot can get elected to office as we have seen plenty in the US.  The difference is that once they get into office how effective can they be.  This is probably where we totally differ in opinion.  I have always believed he was an idiot and scam artist.  Just because he was able to get elected hasn't changed that one bit.  If anything it increase.

What I see from Trump history is that anytime he tries something outside of real estate he has failed.  Every last venture belly up.  So many be you believe that such a failure rate is something admirable but usually people who fail that much would never get hired to run a company.  As we see in 2 years of his administration, nothing has changed.  He is a 70 year old idiot who runs on his guts.  The same guts that has put him into 6 bankruptcies and numerous failed businesses.  I guess if thats what you see as success, you have the right guy in office.

Deregulation. I said "a" boss not "the" boss. I also didn't say I thought that.

His golf venture seems to be working out.

So even Fox News is suddenly turning on him because of Syria. To my friends on the right, it's time to stop trying to defend this guy.

And....the last adult is leaving the White House. Secretary of Defense General Mattis is resigning because of Trump.

Watching Trump is like watching some mad regent. His closest are doing what they can to minimize the damage that he cause while heads are flying in all directions.

If only Shakespeare was alive to turn it into a play.

1. That $5 billion spending bill isn't likely to get passed.  He has less than 14 hours or else there is a going to be a government shutdown.

2. $5 billion isn't going to build the wall.  That's 1/10th of what it really needs to fund construction.

3. What he hell happened to Mexico paying for it? We've gone from having a foreign country paying for it to whining that he'll shut down the government if US tax payers don't pay for it.

I'm laughing at the people trying to crowdfund a wall like some bad video game. I thought Mexico was supposed to pay for this thing. LOL!

It's so ridiculous, people would rather fund the idiotic wall than buy Christmas gifts for their family lol.