Which is a good window for Nintendo but there will still be other Wii U releases. 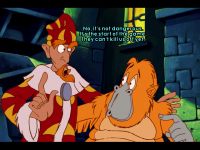 Yup, maybe an extra game or two (I'm still hoping for Animal Crossing) and 2016 doesn't look all that bleak. Then we'd get about 1 big retail game per month. That would be much better than 2015 actually

. If that's the 2016 line-up, I won't have a problem investing in NX after I'm done playing those games.

Holiday 2016 at the earliest, and it may just be March 2017. Anyways, that's leaves 'em enough time to "satisfy WiiU owner" in my opinion.

I think Nintendo will do something with the Wii U-NX to ease the transition. Like maybe Wii U owners get a free game when they purchase an NX. That would go a long way to easing any bitterness. At some point too, I think Wii U owners have to grow up a little bit. Nintendo is a business and has to do what's best for the company.

Writing off an entire fiscal year, not being able to make dividend payments to stockholders, missing your profit targets, having your stock price suffer just so a group of Nintendo fans who are stomping their feet and insisting on no new hardware until they get their Animal Crossing and Metroid just isn't a sane way to run a business.

Nintendo needs NX out quickly so it can start an upturn in revenue and profit for Nintendo, and new hardware takes time to build momentum too (the first 6 months is usually a write off), so it would be more like Nintendo writing off two full fiscal years if they don't launch NX soon.

nintendo is  not just a business, they are 100 years+ old.  they know that the things you suggested are stupid in the long run.

if you plan for more than 10 years than quality and the satisfection of your costumers is more important than dividend payments or stock prices.

True about Nintendogs, but Wii Sports had only purpose and popularity with motion controls with casual players in Wii era. Wii U prove that Wii Sports franchise is dead, fact that Wii Sports Club is a HD remaster dont change anything, its probably worst selling Nintendo game for Wii U.

I would love returning of Pilot Wings, but more like a Pilot Wings N64 game not this recent ones that forced motion controls.

For me, i just normally look Wii games and buy older games.