Fun fact. I had a QTE boss fight against Buck in Far Cry 3 the night before the boss fight video leaked. It was weird at first but I ended up enjoying it and knifing that bastard felt great. I felt the same about the numerous QTE boss fights in The Wolf Among Us. However, seeing everyone go apeshit over the QTE bossfight in the order was  interesting. I just dunno.

Based on this score, I expect a Metascore in the 60s. So ultimately it's going to end up below the range of mediocrity and fall into the category of complete shit. it still will sell well, I think

Not on my console of choice, but if it was, I would buy it. RYSE got panned by the media and the critics and I liked it that much I got 100% achievements on it. QTE's don't bother me if they aren't too intrusive. I don't like sitting through too many cutscenes, but this game at least has a good atmosphere to it. The worst gripe I've read about is this:

I've included the apostrophes (which should be removed if you want to view it) to avoid spoilers for those still getting it. For me, this would again not be a deal breaker but could have been done better.

Game time will vary depending on the difficulty setting, gamer skill and how much you rush things. Cut scene time is constant. And it's 3hrs of cutscene and QTEs. No idea of the breakdown of how much of that is QTEs, which is gameplay.

Why would i think that? I don't use my preferences as a basis for what a game should or shouldn't do. If RAD think they can provide a compelling narrative through atmosphere, characters and cut-scenes, then i wish them all the best. If it doesn't turn out well then they'll have something to build off going forwards.

lol, watch the final boss figth on youtube and save yourself 60 bucks. 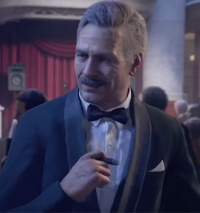 -Very short game (7 hours long, 3 of them being cutscenes and QTE) (like 90% of the games)
-QTE everywhere ( No problem )
-Poor replayability (This is subjective)
-Very bad timming because the game interrupts the gunplay with lots of QTE ( QTE is gameplay)

Still Day 1 for me

I was expecting you to have ready some witty reply for me, but you didn't