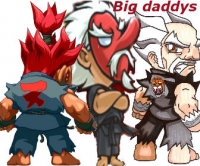 Nope. Has to be from a great fairy. Your argument is now invalid.

So it would be Ganon vs Kratos, and Ness vs Zeus.

As of Triple Deluxe, he can literally eat anything, including the very fabric of spacetime. (Which he does in the game.)

Edit: can't forget about Raiden either!

We interrupt this Sony vs Nintendo debate to bring you an excess of Zelda lore.

Ganon is not the reincarnation of a God. He is... his will is that of Demise. It's an important distinction. Even Zelda, who in Skyward Sword was definitively the reincarnation of a Goddess, inherited only the memories of that Goddess, not her power. Ganon does not have God-tier power from birth, he acquires great power over the course of his eons-long life. It would only put him on God-tier if he obtained the full Triforce, as in A Link to the Past. But the Ganon who appears in Melee (or any Smash Bros) is not this Ganon. It is Ganondorf, merely a man with a great deal of power, who appears to be effectively 'immortal'.

Even if Ganondorf was as powerful as Demise, Demise was defeated by Hylia. He was also definitively destroyed by the Triforce, which represents the power of the true Gods of the Zelda universe. Demise isn't exactly a God (his title is Demon King, not... God of anything), and his power level is about on-par with that of Hylia, who is herself not as powerful as Din/Nayru/Farore. I think we can reason based on this that Ganondorf is not as powerful as the Golden Goddesses, and therefore is not quite on the same level as Zeus.

I like the Kirby theories, that little dude is nuts. Haha. Also, don't anybody forget about this now.

Jak could stop time and meanwhile, the rest of his team could simply take the Master Sword, kill Ganondorf, and finish all the others. I'm not sure about Kirby though.

Don't forget about Ratchet. Aside having several versions of the RYNO, he also has the Groovitron. That means that the enemy whoever Ratchet throws it at starts dancing uncontrollably. Which means total vulnerability. And Clank, as of A Crack in Time, possesses the skill to manipulate time too. How about that for some backup?

If we restrict it to things that have specifically been demonstrated within games then PSAS would likely win simply because of Jak. Being able to pause time is somewhat of an all you can eat cheat code buffet.

If we are making assumptions about what the characters are potentially capable of, then neither side would win. It would just be an endless battle of them one upping each other.