3DS and PS3 starting off the year strong though.

Just FYI, they made it bannable to post that chalk board here again (even though it wasn't bannable for the years it was actually semi-relevant).

Does anyone know if these numbers are using the data from December NPD? Seem a bit high.

Thats fine, it servered its purpose back in the PS3 days, its revelant here.  Me being banned doesnt change that.

high software sales in Germany was indeed a true indication. I bet there wouldn't be much change after the adjustments are up.

Ethomaz was pretty much warned by Khan last night because he posted a WiiU related .gif from GAF, claiming it was unnecessary and not to do it again.

Sadly I expect the same to happen with this.

For standing by your principles, that's pretty sweet, hopefully you don't get banned :)

Good man!! If the BulletBill crashing into the city .gif can be posted when Vita gets outsold big time in Japan by 3DS around these parts then so can this, as well Pirates of the Caribbean cannonball .gif.

Keep fighting the good fight everyone. 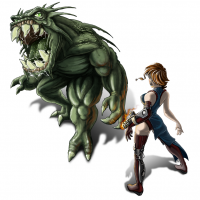 It harmless stuff really, I mean the figures will ultimately prove anyones statements true or false... dont think there is any need to ban people unless they are posting the same thing repeatedly.

If a site wants to get its self taken seriously, then first it needs to let people have an opinion (even if others thinks it is wrong as ultimately the figures will say who is right and wrong), and second they need to be more active banning/deleting the "penis size/Girlfriend has dumped me" teenage type posts.

Wii U in Europe is doing really bad. It really doesn`t help being the most expensive console right now in Europe.
But above all, it really needs some good games. Don`t think any game besides Rayman and Lego City will help. Pikmin 3 shouldn`t have been delayed.

Sounds about right. But with the likely announcement of new consoles sometime in Q2, the aging HD twins will likely suffer drops beyond normal saturation. Wii U could also very well drop well below 115k for many weeks, especially if Japan slows down and Americas and Europe continue to ignore it (Europe in particular could screw the weekly numbers). All in all, I stand by my 4 million sold and 4.5 million shipped by the end of March (Wii U, of course), which will be 1 million below the official forecast and 1 million+ below the desired sellthrough estimates. If the numbers falls significantly below these, they will have to take immediate and drastic action.