Though I'm surprised you even bought one. What is this madness?!?!

Upgrading his PC is not choice if you read carefully the OP.

He can sell it for euro, which can be used to buy parts for a PC (better parts), unless his PC is already good then he can buy games for the PC.  I mean, this argument is being used against yours because you are automatically assuming that he doesn't want his 3DS because of graphics.

Yes,I am surprised that he has a 3ds.

Looks like you have some kind of kandicap my friend.

Show me any text in which I wrote that he is getting rid of this 3DS because of the graphics.  I will repeat myself again, hopefully you will understand this time.  If people who have the same preferences as him (people who right now think that the 3DS sucks) and eventually find themselves in a situation to get a 360 in exchange for their 3DS; getting a 360 will be an even better choice when the 3DS gets uglier graphics.

Also if upgrading his PC was in fact an option he would have mentioned that literally dont you think?? We are on a gaming site, so you would think that if he actually intented to upgrade his PC he would have said so.    I just made the best recomendation based on the fact we are on a video gaming site and the options he has available.

All this off-topic nonsense began because other person (Significant_leap) nitpicked a thing I said and answered without understanding what I wrote in parentheses.  It was an observation of what would happen later if someone else finds himself in the same situation once the 3DS XL releases.

You were being misleading because you keep saying "when the 3DS gets uglier graphics" and you're talking about getting the 360 BECAUSE of that.
Also, the reason why he doesn't like the 3DS would give insight on what he wants, and maybe he wants something specific out of a system.  Maybe it wont be a good idea to get a 360, given the circumstances.  Maybe a 3DS would be better to keep, but he simply doesn't understand the system yet.  This is also to help others and the OP make an educated decision based on other peoples responses. 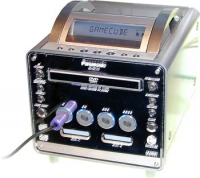 MDMAlliance
dont put too much effort on this dude, its a lost cause, basic logic is not computable for him....xD

Get the 360 only if there's a particular 360 exclusive you're positively dying to play. Otherwise, taking the money and putting it towards the 3DS XL could be a worthwhile choice. Especially since the 3DS is going to have a huge influx of major exclusives between August and sometime in 2013. More exclusives than any other platform can lay claim to for the upcoming time period.