> Wait wait wait, let me get this straight. So you never even played Gears of War 2 and thus you can write it off?

I played some, but couldn't be bothered to finish it. I agree that I would have to play the game to its full extend to review it, but I didn't feel like reviewing it. Needless to say Uncharted easily tops Gears of War for me, actually Uncharted 3 is my most anticipated game, like it or not. 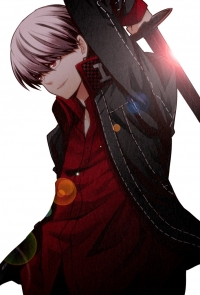 Uncharted 2 is the best game I have played this Gen, and I'm expecting Uncharted 3 will be better, so I'm going to say Uncharted 3.

curious...why did ur friend refuse to buy it? specific reason?

as a shooter gears is better, but all other aspects story, visuals, game mechanics are all much much better in uncharted

Single Player: Uncharted all the way

Multiplayer: Gears of War, although Uncharted MP is still young and will probably improve.

I voted Uncharted 3 because I like just the entire idea of the game and Uncharted has far more possiblilties storywise, with Gears of War, although I love it, the story can't really go anywhere after 3 and the only saving grace for the series after 3 will be the MP. I mean lets face it how many times can you fight off an alien invasion without it getting stale. As opposed to how many action-packed adventures you can go on with Drake. In the end it comes down to one word, potential. And the Uncharted franchise has just that. I won't go into details about graphics but I will say this. I expect Uncharted 3 to set the standard for console graphics just as Uncharted 2 did.

No idea, I asked him if he wanted to buy it but apparently he did not like it when he played it at his uncles house that he had to look after, he did however very much enjoy Heavy Rain lol! But since he got his 360, all he does play is COD with us and odd Halo Wars etc. I'll probably wind up buying Uncharted 2 for like £10 and playing it at his house before he does lol, and I am tempted, although I don't know what I'd do with it afterwards.

You're missin out. From Uncharted 2 at least (U1 was good, but barely even in the same league as U2). But then again, I feel like I'm probably missing out having not played (or even seen!) Gears. I personally don't like the great majority of the exclusives 360 offers (Halo, Fable, Splinter Cell, Forza, etc.), but Gears is one game/series I've always wanted to try out. Ironically, I was finally gonna get to see Gears 2 played by my friend's younger brother. Just as the level loaded his 360 RRoD'd. I was so mad lol.

OT: I voted U3, but felt bad doing so bc it's not totally fair due to me having never played a Gears game. I ended up voting bc I wanted to see the results:/ But, that being said, I am a gamer who enjoys, above all else, the story in a game. I love a game that tells a story so good and has acting so well done that I'm pulled in and made to care about the characters and what happens to them. Although, fun gameplay is extremely important as well (which U2 has also). I obviously can't say for sure, but from what I've heard about Gears, I think I would enjoy the heck out of the gameplay, and probably even enjoy the story; but, overall I have a feeling my vote wouldn't change even after playing Gears 1&2.

Oh, and as for multiplayer? I am so stoked about U3's multiplayer. U2's multi was the FIRST time I have EVER enjoyed playing online multiplayer! I've tried MW, MW2, Killzone 2, Battlefield: BC2, Resistance 1&2 (although Resistance 2's online CO-OP was fantastic!), Halo, etc., and the result has always been the same: I'm bored by it. I know, I know, I'm the minority here; but the fact still stands. Well, I had an absolute blast with U2's multi. You're not just staring down the barrel of a gun with only the ability to jog, run, and shoot (i know that's a generality) - in U2, you can scale walls, buildings, etc. (and still shoot while doing so); you can duck into cover; roll; can hang from a ledge and pull someone off for a kill, or can kick someone in the face who's hanging from a ledge; can throw a propane tank and shoot it in front of someone for a kill; etc. I'm not bashing other games' multiplayer, but for me the varied gameplay in U2's online multi beats all others I've played before (although U2's multi isn't 100% perfect, and def has room for improvement).

So, in other words, I absolutely cannot wait for Uncharted 3's multiplayer. U2 multi was a last minute decision, yet they still ended up creating that amazing experience (not to mention the fact that it was Naughty Dog's first ever attempt at multiplayer). So I can't imagine what 2 full years and multiplayer experience under their belt will do for U3's multi. First time I'll ever be anticipating a game's campaign AND multiplayer.

Get a ps3, that will fix that problem! haha.

Well, I mean it's possible for him to truly just not like the game, but he would be in the great minority with that opinion. The story, cutscenes, character development, action, oh and not to mention the ridiculous, insane graphics - all aspects are just so epic. Closest thing to a Hollywood movie I have ever seen in a game, by a long shot (MGS4 is the only game that ranks close). My guess is that he only played a little bit of it, and formed an opinion from that. You should try renting it and taking it over to his house and playing it with him (the single player is one of those few that is actually fun to WATCH as well as play). Play together for a good while, then maybe that'll convince him to go out and  buy it, while also saving you some money. Oh, and read my post above about the multiplayer. If he likes multi, it's worth him trying out U2's multiplayer. I absolutely love it.