Over the past few months, BioWare has essentially transformed into a single-game studio as it harnesses its teams to work on the ambitious multiplayer action game Anthem, sources say. There are still small teams maintaining Star Wars: The Old Republic and piecing together the next Dragon Age, which was recently rebooted, but the bulk of BioWare’s staff in both Edmonton and Austin are now on Anthem. And there’s a sense among BioWare employees that the company’s future is inextricably tied to this game.

Anthem, which was announced at E3 2017, is now scheduled for release in early 2019, according to three people familiar with the project. The “fall 2018” window mentioned during that E3 announcement was “never realistic,” one source said. Exact dates remain in flux—and Anthem’s developers must also plan for a beta release, an EA Access launch, and an ongoing schedule of patches and updates—but it appears unlikely to developers that publisher EA will allow BioWare to delay the game any further than March 2019, when the company’s 2019 fiscal year comes to an end. (EA, like most publicly traded companies, uses the fiscal calendar as a basis for all of its decisions, as those dates determine how investors will behave.)

To BioWare staff, the stakes feel higher than they ever have. As one developer told me, there’s a belief that if Anthem doesn’t live up to EA’s expectations, BioWare will look very different in the future, especially after the disappointment of Mass Effect Andromeda led to EA absorbing BioWare Montreal into the studio EA Motive.

nothing particularly surprising following Andromeda, but sounds like EA could potentially be wielding the axe on another part of Bioware if Anthem doesn't go well

Going by what happened to almost all other legendary studios EA bought I guess we can all say goodbye to Bioware already. I mean they’re done already anyway. Bioware is nothing more than an EA sub-brand these days.

"As one developer told me, there’s a belief that if Anthem doesn’t live up to EA’s expectations, BioWare will look very different in the future'

In other words, Bioware will be added to the pile of corpses buried in EA´s backyard. 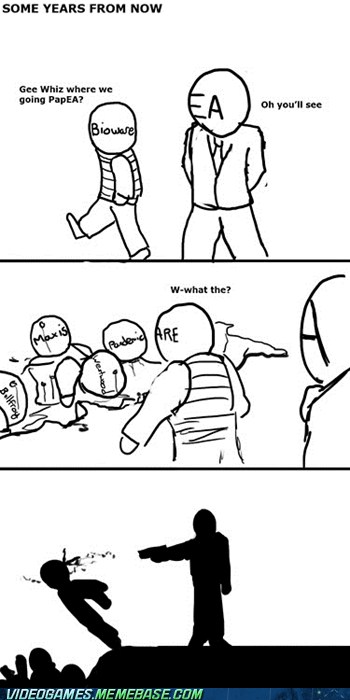 It's a multiplayer-game, i've already written it off

Goodbye, BioWare. It was pretty good while it lasted (which was really a pretty long while).

When did it start going wrong with Bioware? Anyone? I believe it was The Old Republic MMO.

The obvious answer is the EA acquisition, but they did release the Mass Effect games after that.  So I'm guessing it's somewhere around the Mass Effect 3 ending debacle and also when Ray and Greg left the company.  Which I think were both in 2012.

No offence to anyone looking forward to Anthem, but it doesn't look very good :o

Yeah, I’d say between DA2 being a quick casualised and gory cash in and ME3 being more of a shooter than ever. Which then lead to those two leaving.