Seriously though, with Super Mario 3D World Debut back at E3, Many were disappointed or frustrated! I mean a true 3D Mario is just a sequel of the 3DS Title?

Wow Many of Us were wrong..... So Wrong! With this game being the highest rated title of the holiday and possibly one of the highest in the 8th gen of gaming.... Now is the time for the Ones who doubted Nintendo to step forward and eat... 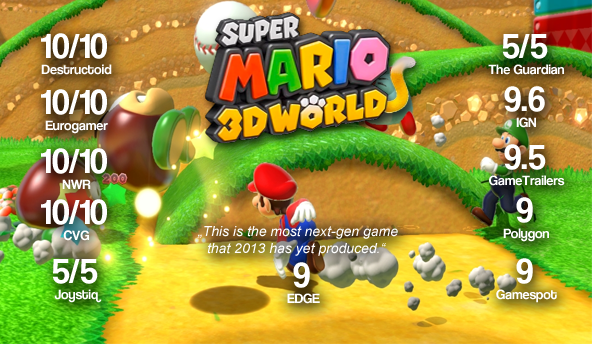 Seriously how many of you doubted the game and feel bad about it! Post your answers now!!! Never been so happy to be wrong!

I did. No shame to admit it. Reveal trailer still sucks and will continue for the eternity.

I always like Mario, but I think much of the reaction was in hopes of Galaxy 3 or similar title. I still hope one does come to Wii U eventually.

I'll admit I wasn't expecting it to be quite this well-received.

Pass that crow this way...

When I first saw this game, I thought it was the biggest disappointment in 3D Mario. I remember saying the following: "HD 3D Land rip off," "EAD Tokyo losing their touch," "Garbage compared to Galaxy." "Biggest disappointment at E3." After that newer trailer I knew i was going to be eating that crow :(
It's incredible how one trailer just completely changed the perception of this game for many online.
This is going to be the funnest game this Holiday (for me)!!

Edit: I remember calling them lazy too :(

Nice review, this should drive some sales.

curl-6 is our punching bag. He even went as far as saying that the graphics lack detail hardcore. What a tool he is.

93? You mean to tell me that this game is no better than Skyward Sword?

Still not on par with mainline Mario for previous home systems. Gamecube mario is debatable.