Gylt has you play the school girl Sally, who looks for her missing cousin Emily. As she flees for bullies she decides to take the cable car home, but things start to become strange. The town is changed, no one is here and everything looks abandoned. Things become worse, as it turns out the town is filled with nightmarish monsters that Sally needs to sneak past. But she also finds evidence that Emily is here too, so she goes on.

Developer Tequila Works does good work with creating a creepy athmosphere and providing decent stealth gameplay (with one big problem, I will point out later). You have also some puzzles on the way, some collectibles and a few boss fights. Most of the time you play at the school and it's various extra buildings like art hall. But some part also plays in the mine and the arcade. The arcade level is in my opinion great level design and the whole encounter is done very well.

But the game isn't without flaws. There are two major flaws, that preclude the game from reaching a better level. The main gameplay is stealth, and it works quite well, the monsters are scary enough that you *want* to avoid them and you get quite some tools at your hand to distract or to stun monsters, which helps you to get to the place you want to go. That is fine - if not pretty early you also get a tool to destroy the monsters. Which is nearly every time the better solution. It does take some resources (batteries), but you get enough of them, so that you can destroy enough monsters to reduce quite some challenges. To be fair - to destroy a monster you have to do it right, but it is easy enough that you get it done. I wished though, they would have limited this option, either by letting it eat more resources or by destroying the monsters only temporarily. That way the game would still be challenging and you would need to use all tools at your disposal, which would be great as you have some options here.

The second problem is the ending. Well, not the ending itself, but the sequences before that. First of the devs at Tequila Works use the time proofed way to annoy gamers by taking away all the tools the player ammassed at the end of the game. That is cheap. But that doesn't matter that much actually, as they decided that your last challenge has completely different gameplay compared to the rest of the game. All the game you sneaked around, but in that sequence you run away from the big bad end monster. And to make things fun they change the cameraa perspective. They zoom out that your character is small and the monster fills the screen. And to make things more fun, the camera is in front of you, so that you barely see where you are running. And each time you mess up the sequence starts new. Really, the devs need to be slapped for this, what were they thinking?

The ending sequence could have been fixed. At this point you found and saved Emily, so they could have implemented stealth with two characters. Maybe switching between the two and a few puzzles where you need both characters at different ends of the room doing stuff at the same time. Something like this. And the big boss could have been searching for the two, instead of openly chasing them. I know this would've worked - because they already did that in the arcade. At the point you find what you came for in the arcade a boss takes notice and start searching you, so you have to sneak your way back avoiding that boss. But the boss sensed your proximity, but not the exact position, so it was always searching in the area you were in. That was challenging and exciting. Doing something similar with two characters would've provided a great final sequence. 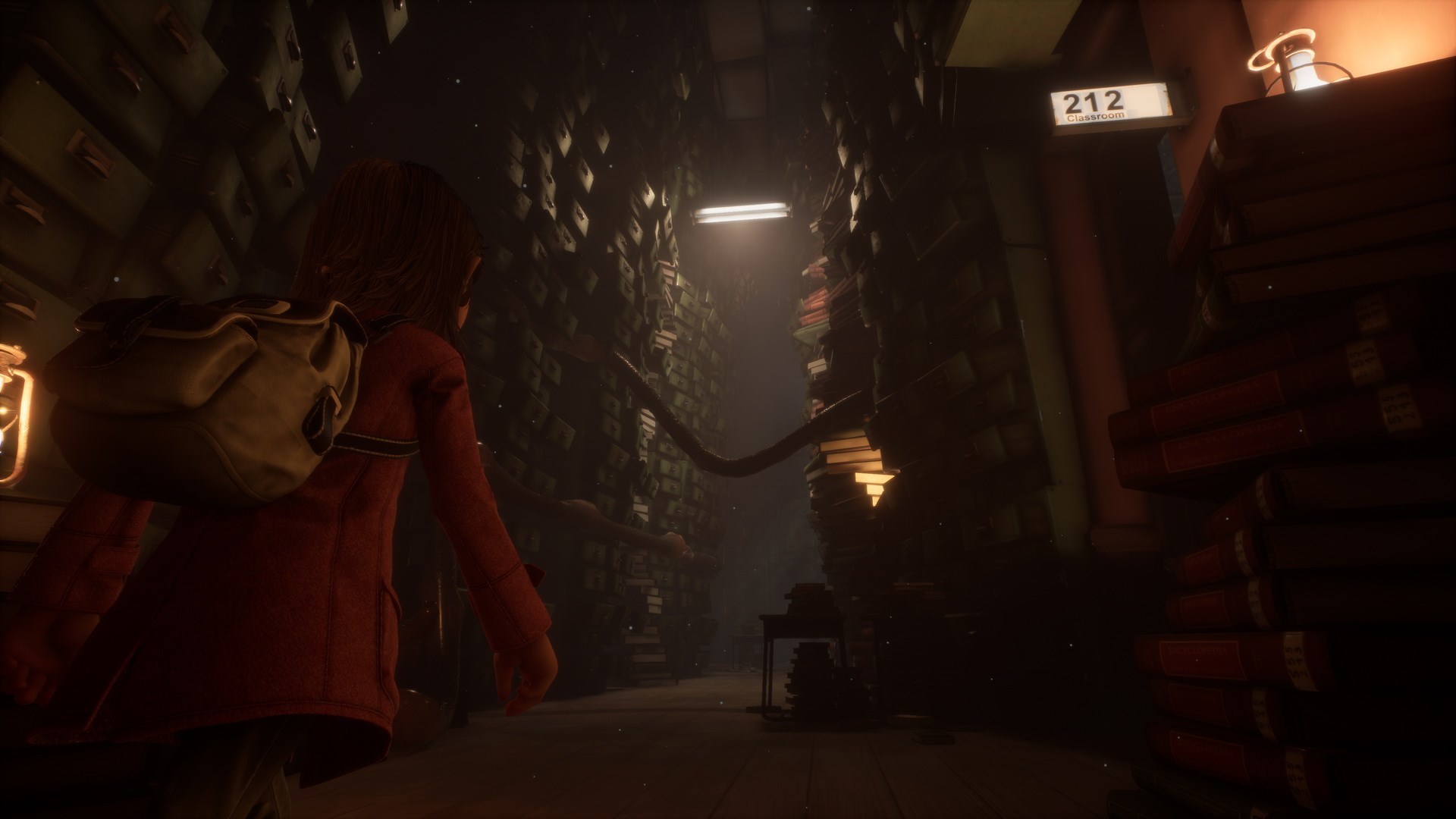 Despite this shortcomings it is a very enjoyable game. The game has few jump scares, but it excels in providing a utterly creepy atmosphere which is cranking up slowly over the course of the game. There is not too much story, but collectible texts you find and some stuff that is said is providing some background for the setting and some explanation for what is going on - if you find them. The game also depicts bullying in the school context on different levels. I also was very fond of little hints of Emily's existence in the game. For instance in one instance I fled from a monster into a niche around a corner - and found a sleeping bag, a light and some snacks. It said instantly that the little girl you search for fled drom the same monster.

I should mention the Stadia exclusivity. Gylt was one of the first or even the first (I'm not sure) exclusive game for Stadia. That made many look at the game as a representative for Stadia. But that is a bad stance, a small indie game cannot carry a whole gaming platform. For that task Google needs to release first party games. But if you accept that Gylt is just a little Indie game, it turns out to be quite a good result. Therefore I hope the exclusivity contract ends sometime soon and the game finds more audience on other platforms. Because it deserves to be played more.