Ok, the next 5 games expose my bias for Kingdom Hearts and 3D Zelda: 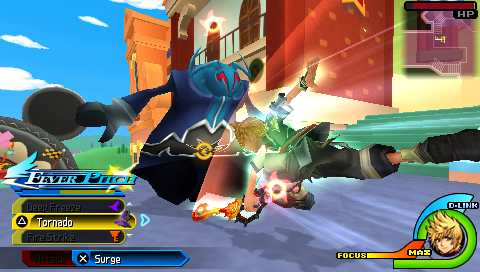 Instead of having one main playable character, this game got three of them, all of whom have fully fleshed-out and completely different playstyles and movesets. Also, each character has their own story path (the three characters' stories  are parallel to each other). This game made a fantastic job at making me care about the relationship between the protagonists, and seeing what happens through the story can be heartbreaking (the ending

). Story-wise this is definitely the second best in the series after KH1 (also, it doesn't suffer from the convolutedness that plagues the series).

Regarding the battle system, Birth by Sleep offers a twist to the traditional KH combat in that, instead of having fixed commands in your battle menu, you can customize said menu with the commands you want, so choosing the right commands is key to defeat enemies and mainly the bosses. A gameplay system that is really addicting in this game is the Commands Melding system, which allows you to create new commands by fusing the ones you already have. The level design in this game is an improvement over KH2, as it brings back some of the platforming and interactive elements that existed in KH1. Also, this game got a lot of extra content, for example, I love the rumble racing mini game and the command board (a little optional board game which allows you to get different commands). I must mention that it's amazing how they managed to make this game an almost console-esque experience on the PSP.

This game just has a lot of heart in it, the story got so many memorable and heartwarming moments and it's the best in the series mainly thanks to its relative simplicity. Also, the game's mysterious atmosphere is something that I really like about it. Unlike most of the later KH games, in KH1 the Disney characters actually have relevance to the story, which is yet another reason as to why KH1's story is the best in the series. The levels in KH1 give a fantastic sense of adventure and have really nice plaforming and interactive elements in them (Atlantica and Deep Jungle get criticism for being "frustrating", but I don't mind them); in particular, the Hollow Bastion world is my favorite in the series (though that might change once I have time time to play KH3), I still remember the first time I reached Hollow Bastion, it was truly something else

. Sora and his partners, Donald and Goofy, have a lot of chemistry together, and I love that the game shows how their relationship evolves during their travels; also, I love Sora and co.'s interactions with the Disney characters, that's one of my favorite parts of this game and the series as a whole. My nostalgia for KH1 is also helped by the fact that I grew up with a lot of the Disney movies that appear in it. The game's OST is just in another level.

#13 - The Legend of Zelda: Twilight Princess Twilight Princess shines mainly thanks to its brilliant dungeon design, and that's one of the main reasons it's so high in this list: I just felt blowed away so many times at how tightly and cleverly made are the dungeons, and at how creative and brilliant the puzzles are in all of them. Also, I love how some of these dungeons have really interesting settings, for example, the City in the Sky, or the mansion of the Snowpeak  Ruins. This  game also got some of the most interesting and fun to use items in the series, for example, the double clawshot is my favorite item in all Zelda games and the spinner just feels so good to use (obviously those aren't the only great items in the game, but they are my favorites), and the way the items are used in the dungeons is overall brilliant (it's just a shame they are underused outside the dungeons, though).

Another highlight of this game is Midna, she's just so likeable and I love her character developent, as she truly changes her way of seeing things during the course of the story, she's probably my favorite (or at least in the top 3) character in the Zelda series. Then there's the boss battles, which are just the definition of epic, for example, the battles against Stallord and Argorok are easily among my favorites in the series. Also, I love the Cave of Ordeals in this game, as it has some very well designed enemy encounters. Sadly, the visuals have not aged that greatly, but I still enjoy the atmosphere that the game gives off, and the soundtrack is pretty underrated. 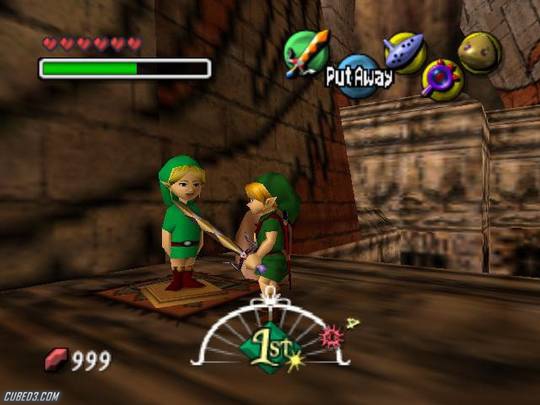 Majora's Mask is one of my favorite Zelda games mainly thanks to how dark and unique it is: the concept of the moon constantly threatening the world, as the fated hour of its fall comes closer and closer adds an interesting atmosphere of doom to the game's world (Termina) that other Zelda games don't have. The time limit system that results from this story set up adds an interesting element of tension/pressure to the gameplay flow that I personally enjoy: in this game you'll have to learn to manage your time to be able to do whatever you want to do (for example, clearing a dungeon) within the time limit, so you can come back in time before the fated hour of the moon's fall comes.

The game's main hub, Clock Town, is easily one of my favorite towns in video games and is my favorite in Zelda games, they did an incredibly amazing job at making the place feel alive, mainly thanks to every NPC having their own schedule and mini-story. This takes us to the side quests, which are my favorite aspect about Majora's Mask: they are amazingly memorable and truly give life to each NPC in the game, they just do an amazing job at making you feel attached to Termina's inhabitants. Another unique aspect about Majora's Mask are the mask transformations, which add another layer of depth to the 3D Zelda gameplay created with Ocarina of Time. The game's soundtrack is also another aspect that enhances its unique atmosphere. 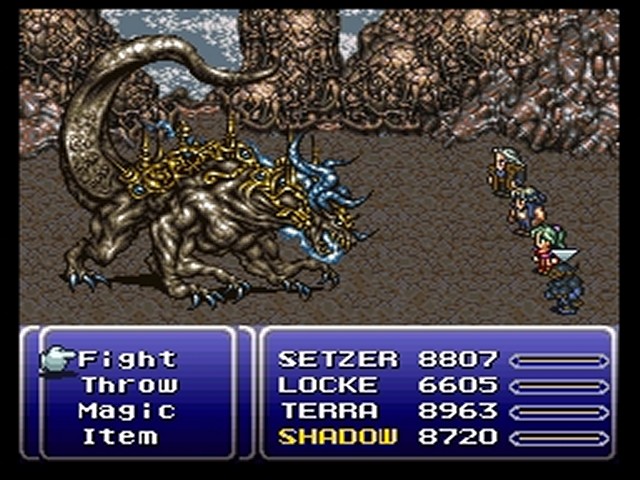 FFVI's cast of characters is my favorite from any Final Fantasy game and one of my favorites, if not my favorite, from any J-RPG. All the characters in this game are charming, super likeable, and have great chemistry together; but not only that, they are incredibly fleshed-out, since all of them have their own backgroud story which is memorable and can be very moving. Also, the way they develop during the story is one of the best things about them. The story in this game is simpler than in later games in the series, but its very very well paced and, mainly, it has so many memorable moments (the Opera scene

). Not only the playable characters are great in FFVI, but also the main villain, Kefka, is amazing, as he's just ruthless and is capable of doing some really cruel stuff to meet his goals (which he actually happens to accomplish), he's my favorite villain from any video game ever.

Gameplay wise, the combat feels faster paced than the PS1 games (even though it came out earlier than them), which is a big plus for me. The esper system is an engaging way to get abilities, and I like how this character growth system is associated to the game's summons. Also, I love how these gameplay elements are well impletented into the game's story. FFVI also shines thanks to its side quests, since they are filled with memorable stories that help to explore the characters' backgrounds and personalities. The sprites in this game have also aged better than the visuals of the PS1 games, and the OST is glorious (Terra's theme is one of my favorite video game songs ever).