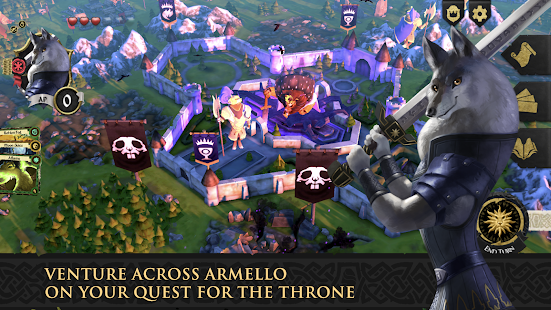 Armello is an indie board game. Yes, a board game. You move on a hex-tile based map of the kingdom of Armello, you roll dice, you draw and play cards. And it is a lot of fun.

The basic premise is, that the king of Armello is corrupted by the rot and you go on a quest to take the throne and control Armello. There are four tribes going for power: rabbit-clan, wolf-clan, rat-clan and bear-clan. You can win the game in different ways. The easiest way is to wait for the king to be consumed and die by the rot and have the highest prestige at the time. But you can also try to slay the king (which let's you win instantly), slay him with higher corruption or cleanse the rot. Three other heroes do the same though and try to be faster.

This is all pretty challenging, you have to think about your moves to claim the victory in the end. And the board-game mechanics are simply perfectly tuned. Every card you draw, every quest you take, it all matters. And the presentation is so charming. Everything is so beatifully drawn and animated.

I played it on PC as you can see and Switch. The Switch version I tried early after release, and it had some glitches which soured the experience for me (which is why I only list Linux as the platform I played it). But mind you, the glitches were minor and I have to try again, probably they are fixed by now. Overall the game is out for everything basically, all major PC, console or mobile platforms.

Armello can be played online copetitive, but I am content to play solo (pretty much like Civilization or games of the like can be played multiplayer, but I prefer solo). So if you're in for the multiplayer experience, you mileage may vary.