As Flilix guessed correctly, my next game is Pillars of Eternity.

As the Black Isle Studios, that were once famous for their RPGs, was closed down, some of it's employees founded Obsidian Entertainment. Obsidian then produced games, mostly sequels to former Bioware-titles, another studio with a big RPG-history. But at some point Obsidian got a lot of projects cancelled. They decided to try crowdfunding on an self-developed title. The crowdfunding-campaign for Pillars of Eternity ended up being the most sucessful crowdfunding for a game at the time at 3.9 million $.

Pillars of Eternity is made in the style and as a spiritual successor to Baldur's Gate and other Infinity-engine-based  titles. As these Pillars too has an isometric top-down view and real-time gameplay with pause-function to issue commands. As the infinity-titles Pillars has a rich world, many NPCs to talk to, quests to fulfill and areas to explore. In difference to Baldur's Gate the backgrounds aren't pre-rendered but are rendered in real-time, which allows for better lighting and interaction. 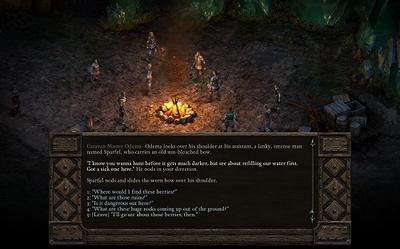 As Baldur's Gate you control a party of characters, of which you created the leader. The other characters join you as the plot progresses - or not, you decide which one joins your party. Pillars has not licensed D&D, but created a system that is quite similar. As they also couldn't use the campaign-setting they created their own world Eora, which is big and interesting.

Pillars of Eternity is available on many platforms, I played it on Linux. This year a crowdfunding campaign for the sequel Deadfire succeeded, which now is under production.