Sadly nobody got that. It is Jagged Alliance. 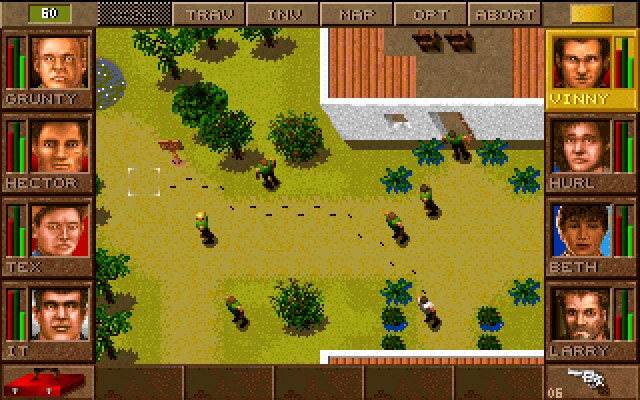 Jagged Alliance was a tactical game, where you controlled your set of mercenaries to win back control over the island Metavira. It was kinda hard. If a mercenary died on the field, he was gone, and the other mercenaries you could hire became suspicious if too many guys died under your command. Even if only hurt, the merc was out for several days.

The back-story is, that the guys that hire you found out, that some trees on the island of Metavira developed a sap that could be used in the production pharmaceuticals. A companion of them started to take over the island to get the profits of this for himself, and he brought armed guys to take control. So you're hired and you're armed with a notebook from A.I.M., the Association of International Mercenaries. With this you can hire mercs and they are flown in the next day per helicopter.

You're not only in charge of recapturing the island, you also have to look out to hire workers to get the tree sap, because without that you cannot get more funds. Also you should hire guards, because the enemy makes counter-attacks.

This game is turn-based, but punishes errors very hard. You should always look out for your funds, for the layout of the map and other developments.

The game was initially released on DOS. There was a port to the DS, but stay away from that, it is a bad port. Better play the original game under Windows or with DOSBOX under different systems. GOG has it in the catalog.