As guessed by LiquidLaser this is indeed Hyrule Warriors. 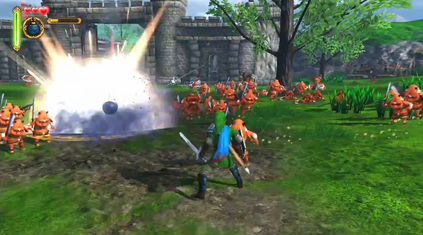 This game featured a lot of Zelda-themed enemies, including some big bosses. The boss-fights included the usage of typical Zelda-items like bombs or the bumerang to defeat them. The items also helped to reach more areas on the map or get some treasures. They had also an effect on normal enemies.

This game is just fun, slicing through hordes of enemies, while still keeping an eye to the overall situation to reach your objectives.

There was a later release on the 3DS under the name of Hyrule Warriors: Legends, but this is a game that in my opinion works better with the big screen. So the WiiU-version is my pick. Aside from other Warrior-games that play similar, the Switch now has Fire Emblem Warriors, which in my opinion is good, but not as good as Hyrule Warriors.