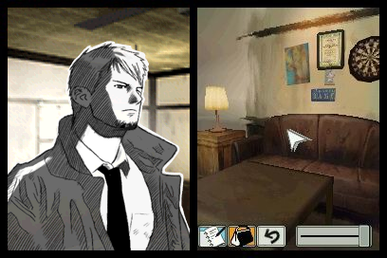 The small gaming company Cing revived the Point-and-click-adventures on the Nintendo DS. Cing had made before this game already Another Code, also an adventure for DS. They released a sequel to Another Code on the Wii and a sequel to this game also on DS. Of these four game I think this one is the best.

You do classical point-and-click-stuff: searching for items and clues, talk to other people, solve puzzles. This game had each in-game hour made into a chapter and ended it with a little quiz as reflection what was done before.

The game was played with the DS hold like a book, the two screens on the left and right instead of top and bottom.

The style was a combination of 3D-backgrounds and black-and-white drawed people.

Sadly Cing made not enough coin and filed bankruptcy in 2010. Would be nice to see how that would've developed over the years.