So, S.Peelman got the series right and Liquid_Laser the game, it is Indiana Jones and the Last Crusade: The Graphic Adventure!

Phew, what a title. But needed as for the Last Crusade also another game existed (which I never played). I liked the Adventure-game. 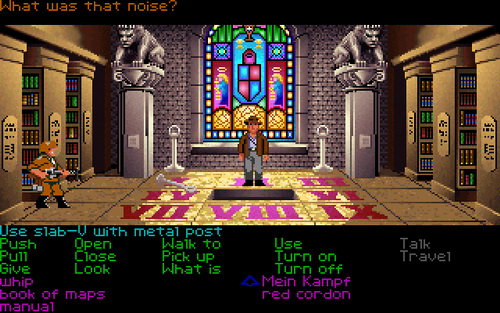 Well, this was one of the great adventures from the time LucasArts games were great in that department. The story obviously is based on the third Indiana Jones movie, the puzzles are just adventuring greatness.

This game combined everything that made Indiana Jones movies great: action, humour, clever solutions for problems. And you could play Indy yourself!

The game was a success and followed up by another one, Indiana Jones and the Fate of Atlantis. Which is good, but not as good as this one.

By the way, LucasArts did put a hint on their internal comic Sam&Max into the game. They made later a game for these two. The totem-pole in the left show Sam&Max.

This is the great time of point-and-click-adventures. You have the full command-bar which was later removed to make space for more graphic and in turn less complex gameplay-options. So play this, if you want to have full point-and-click-glory.

As another note: naturally Ron Gilbert was involved as with so many great LucasArts games. I already mentioned him for the Cave.