Ron Gilbert and Tim Schafer both worked at LucasArts, back then in the golden time of point-and-click-adventures. They created games like Maniac Mansion, Day of the Tentacle and Monkey Island together. They left LucasArts in 90s. Tim Schafer the founded DoubleFine, which you might know for Psychonauts, Costume Quest or Broken Age. 2013 released Double Fine a game created in cooperation with Ron Gilbert: The Cave. This is my game for today. 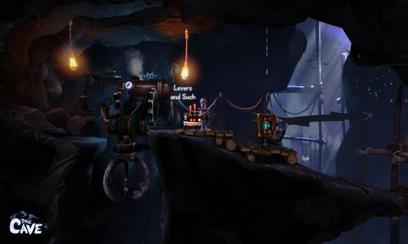 The Cave follows in many regards the design of classical point-and-clicks. There are puzzles that are connected to the story and solving them progresses the story. As many of the classical adventures some puzzles are in itself fun.

The Story features a talking cave, that basically comments everything oyu do as a player. You enter with three characters out of seven (one character are actually two, they are siblings) and progresses through the story. For many puzzles you need the characters work together. All characters have an individual ability. Each playthrough contains story-parts that are common for all, but also for each of the three chosen characters an individual background-story. The story has dark humour that is cracking me up.