As Liquid Laser guessed my next game is nethack. With the mod I mean Slash'EM (Super Lotsa Added Stuff Hack - Extended Magic), one of the more popular source-code expansions that includes new items, classes and areas. 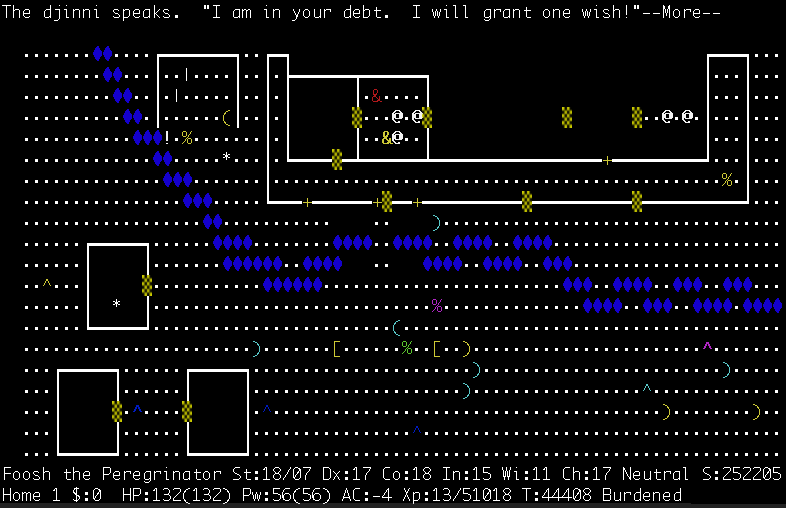 The game rogue from 1980 was one of the earliest games in the history of videogaming. It displayed it's dungeons as text-screens, each character having a distinct meaning. You were an adventurer, looking for the Amulet of Yendor (Rodney backwards), the labyrinths were randomly generated, death was permanent and you had to start over and it was a RPG. This game was so popular, this basic recipe was copied, thusly creating the genre of roguelikes. As the codebase was simple, it was ported to a lot of platforms.

One of these copycats was the game Hack from 1982. Agains this was ported to basically every machine under the sun. As the sourcecode of the game circulated along the game, others could extend it. A team of people (subsequently called the DevTeam) formed in the internet and tackled the task to extend Hack. Nethacks first release was 1987. But the DevTeam never stopped to work on the game, and from time to time it gets updates. The last one was 2015.

Slash'EM (1997) basically developed on the basis of Nethack. First a game named Slash introduced more stuff. Slash'EM extended more on this. Some of it's additional features found it's way back into newer versions of nethack.

Nethack offers a unique challenge. All the features that I said above for rogue still apply to nethack and Slash'EM. It is also still presented in all test-graphic glory, as can be seen in the screenshot above. Well, for the weaker souls a tileset has been introduced, to makee it graphical:

And external clients popped up, that enhance on the graphic even more, like VulturesEye:

Despite the graphics (or not), the gameplay always stays the same. It is turn-based, meaning you take an action (including a step), then all the monsters take an action. You choose at the start a race and a class. The classes include classical roleplaying stuff like rogues (obviously), knights, wizards, but also more unusual ones like archeologist (based on Indiana Jones), Caveman or Tourist (based on Terry Pratchett books). Famously you also have a pet companion, often a dog or cat, but sometimes also something else. These pets fight alongside you while you delve into the dungeon. You can also tame monsters from the labyrinth, earning more companions. Items in the game must be identified. If you first come along a potion or a scroll, you don't know what it does. You have to find out by casting Identify or by trying. You can do basically everything in the game: polymorphing into another being, summon a Djinn, digging for treasures, having sex with a succubus and many more things. But one thing is clear: you'll die - a lot.

Nethack is very hard. Although it is turn-based and you can think through your steps, you'll find yourself often in difficult situations. Basically I think, the real hardcore-gamer has beaten this game at least once. Dark Souls? Pffft, childs play.

Nethack and Slash'EM are basically included in every Linux-distribution, but you can also download them: nethack/Slash'EM.

This video shows a Slash'EM game with a graphical client.