Sekiro: Shadow die twice, holds strong at 90 on Opencritic based on 111 reviewers. GotY?

Sekerio, Your Game of the year?

No, not yet I haven't. But that's going to be pretty much the next place for me to go. I did see some enemy through the gate at the bottom of the castle which I'm going to look into first, and then make my way to the top. Might not be until tomorrow though. And holy crap you can stealth him? I swear I walked in stealthed but he was aware of me before I could get close. And no, I base my victory on pure luck, and I heard the garage door start to open in the middle of the fight and I knew my wife had arrived with our dinner, so it was a now or never (later) fight.

Edit: You replied while I was in the middle of my edit, so I dunno if you saw my last bit.

There doesn't seem to be a way to get accurate playtime, I just checked the save file there and nothing stamped on it but the date, suppose you just have to roughly gauge what time you put in over the last 11 days, personally I've lost count but I'd imagine it is quite a bit as I've not been playing much else. Just click on load game, you can see your play time there, didn't even know I'm at 39hrs now, 15mins shy of 40hrs. 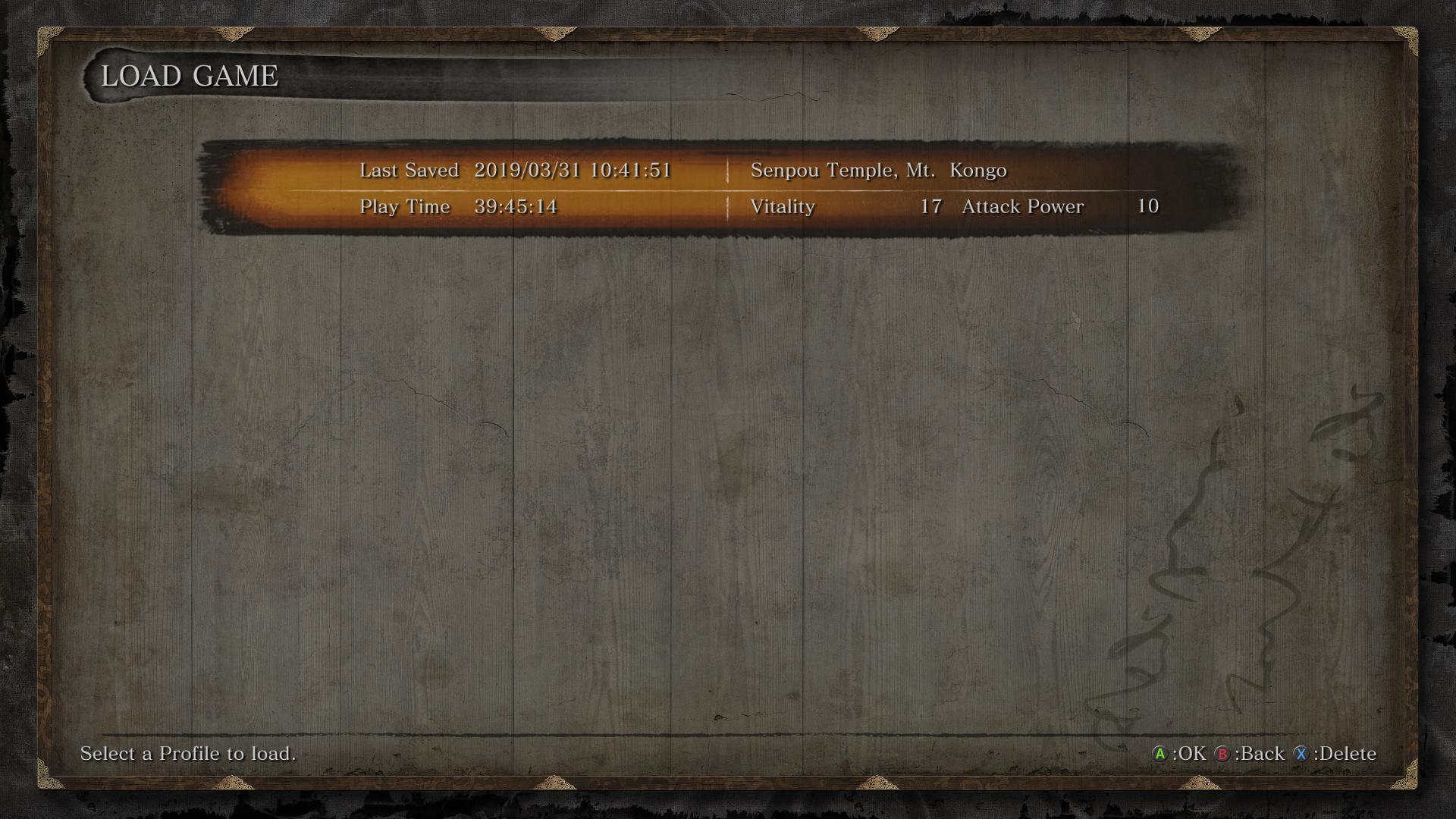 Good Lord, 80 for me but there is no way in hell I've played 80 hours in 11 days, A lot of that has to be AFK time, I did fall asleep with it running one of the nights there and have left it on quite a bit while I do other shit. I'd say 50 absolute max of non AFK time and even then that is a painful amount of time.

So i just beat the

, this was the easiest boss fight I have encountered. Not including the

don't really consider them as Bosses. 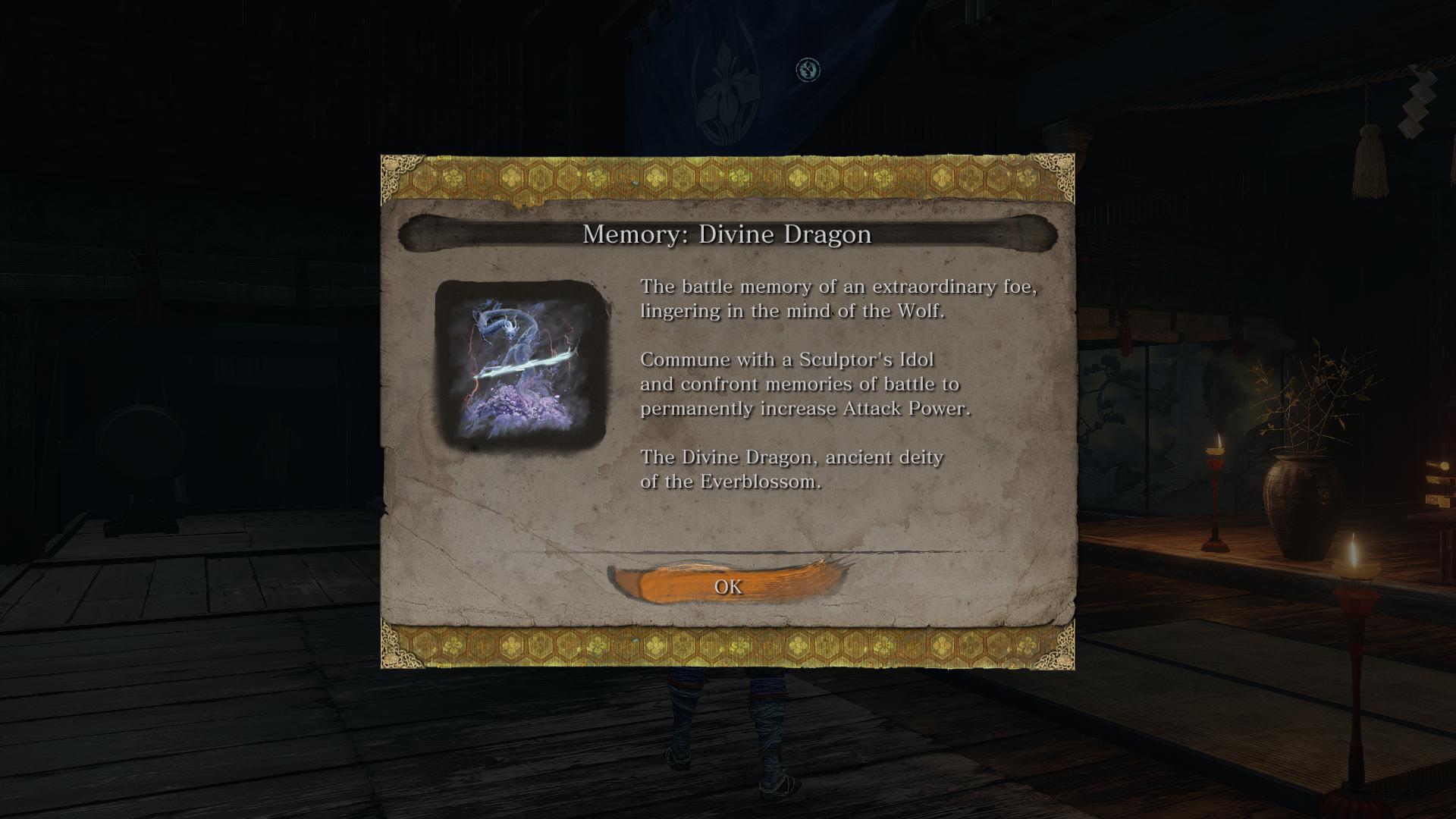 I thought I lost my touch after two days rest.

I will say, do not watch any speed runs especially this guy distortion2.  Under an hour for the whole game and hitting just about every boss.  Not only that but some of the toughest ones he breezes through.  Makes me feel very old.

Oh, cool! My playtime is at 66 hours; probably 55 or so legit hours, the rest afk as is the case with John. I played a bit more tonight and beat Great Shinobi Owl (that was the boss I ended up getting). I made it to the final area of the game (as denoted by an achievement I acquired for visiting all areas) and then I faced Corrupted Monk. After a few tries I had this odd behavior where the boss allowed me to deathblow him in the middle of his shadow phase, otherwise I may not have won the fight. I got another vitality upgrade putting me at 17, with 10 attack power now.

That boss was a girl? :O

Yeah, it was easy but still so damn epic, one of my complaints of the game was that they didn't but in over the top set piece or spectacle bosses/mini bosses to give some comfort between the mega hard ones and now they have done it a few times since mid game.

I thourally enjoyed beating a boss on my first go, knowing that it is a boss I can relax back, watch and enjoy the spectacle unfold safe as some down time before I return to the boss that is kicking my ass and what a spectacle that boss was, so cool. They could have really milked that for difficulty and I'd have been okay with it cause the setting is amazing but I'm glad it was a spectacle fight, it was needed.

How are you doing this? The owl is the Boss that took me six hours, mind I wasn't at 17 VIT and had the Demon bell on but still I...

Spoiler!
Am now fighting him again  in a memory and I'm still dying at 19 VIT attack 11, not nearly as much as before but...

...how dude? How old are you? Are my reflexes just gone with age or do I suck balls? How many attempts did the owl take you? Six hours?...I´m not going to have the patience for that...no boss in any Dark Souls game and Bloodborne took me that long but I can see it easily happening here.We´re not getting any younger and this game in many situations demands lightning fast reflexes in a way that DS and BB could only dream of.