I played this game as if there were no tomorrow as a kid. Which is probably why it's not higher up on the list. I memorized every building, every building's corresponding function, hell, even almost every music track in the game. (And the music isn't even that memorable) I played the game so much that I eventually couldn't stand it anymore. Years later, I still haven't quite recovered. Maybe if I could track down that fucking expansion pack...

I knew you played it, but I didn't know you were such a big fan of Epic Mickey! Glad to see another who enjoyed this wonderful game. ^_^

Did you ever get the art book? I bought it for half off on Amazon, and it's worth every penny. Great read.

Ocarina of Time at number 11.

I'll have to start getting more elaborate for my top 10

A pure quality title, I only thought the middle part of doing missions for your allies dragged on a little too long and that the ending was a little underwhelming. Mass Effect 1 has the better ending, but a weaker start.

I played the demo for this long ago and didn't like it, yet with such a ginormous metacritic I couldn't keep ignoring it. When I did play it, it had great atmosphere. It's a little survival horrorish, which gives me the creeps, so that I don't want to play it for too long at a time. Thus I've played it only once, which isn't quite good enough for being the best game ever in my book.

Rise of Nations came close, but Total War is exactly the kind of strategy game I wanted to play. It really has a lot of depth, which you can safely ignore if you feel overwhelmed. This is here because it's not the first Total War that I played, had I played this first I'm confident it'd be in my top 10.

Didn't think anyone but me loved this game xD

It happened to me too, I memorized everything specially the dialogs of the characters. Even today i'm still playing it from time to time.

You should really get Poseidon expansion pack since it adds more scenarios and campaing (and all the houses have blue roof instead or red xD) and replaces other buildings. It's nice to see someone loved this game too No, I didn't get it. I don't really go for things like that though. Same with Special Editions of games and all the jazz. Standard Edition for life...

Aside from the anticlimactic battle with the second titular character, this game is just great. Through and through, from top to bottom. Nothing stands out because everything stands out.

Black sheep, my ass. This game has everything a Metroid game should have. Difficulty, mood-setting music, giNORMOUS bosses, and tension in spades. It's also nice that you actually have to conserve ammunition and switch between weapons instead of just mowing through everything with the Plasma Beam. On some days, I might even say I like it more than the original. But those are days when I don't remember that grueling scavenger hunt near the end, and they are not common.

By the time the year 2000 rolled around, I was a full fledged Pokemaniac. Pokemon cards, Pokemon: The First Movie, the Burger King Pokemon toys... I wanted it all. And when Pokemon Gold/Silver was announced for the GameBoy Color, it was the first game I ever pre-ordered (Silver version. Lugia is awesome!). Suffice to say, this game was one of my biggest hyped games ever. Still, when it came out... it was like a breath of fresh air. A new world to explore, new myseries to solve, and more importantly, we finally had new Pokemon to catch! Each new Pokemon is like a brand new event in the Pokemon world, and I fell in love with the world of Johto. The game also has one of the best ending surprises ever. The ability to travel to Kanto and then battle Red (that was me!) is still such a huge event in the world of video games. Pokemon Gold/Silver is truly a sequel that brings out the best in what it aims for.

Welcome to Mario Kart! Mario Kart 64 was my first Mario Kart... and the game holds so many fond memories that it's impossible to not see this game as anything but a masterpiece. Trying to find any "secret" in Peach's castle in Royal Raceway. Hitting a friend with a lightning bolt right when he's about to make the jump in Wario Stadium. Three friends firing a plethora of green shells from the top of Block Fort, with you trying to avoid them at the bottom. Chasing friends in Battle Mode as a Bob-omb. Gazing at the stars and other sights in Rainbow Road... I mean, this game is one of the few that really defined my childhood... and I'll always love it for that. Even now, I type all of this with a smile on my face.

The Resident Evil franchise had always fascinated me since the original game debuted on the PlayStation 15 years ago. The concept of surviving a world full of flesh eating zombies and other bio-engineered monstrosities both terrified and intrigued me. So I was always watching friends of mine play these games, as I never dared to play them myself (the tank-like controls and the fixed camera angles did nothing to cast away my fears). But when Resident Evil 4 came out, I was finally ready. The game seemed like a fresh take on the series, and I was ready to take control of Leon S. Kennedy and solve the mysteries of this Spanish village. And let me tell you, Resident Evil 4 was one of the most intense, frightening, action-packed, "holy crap holy crap!" video games I've ever played. In short, the game is brilliant, with every corner holding some new event that will either make you crap your pants or shout out "That was awesome!". The game also positioned Leon S. Kennedy as the number one badass in my book. Hasta luego.

WarCraft III really came out of the blue for me. I mean, I loved StarCraft and I've always enjoyed myself when playing Blizzard's RTS'... but I never realized that I'd love WarCraft III: Reign of Chaos (and it's expansion, The Frozen Throne) this much. For the actual RTS game itself, I enjoy the slower pace compared to StarCraft, as well as the new heroes with RPG-style leveling. I also really enjoyed the four races and the epic storyline that pitted the forces of Azeroth against the Burning Legion. But what made this game really special for me were the Custom Maps of Battle.Net. Tower Defense games as far as the eye could see (with my favorite type being the different themed 'Mauls'), the beginning of DotA (including the most racist and homophobic people ever), and every other type of gameplay style under the sun. There was so much to see and do... it's almost overwhelming. WarCraft III is easily my most played game ever... and for good reason. Whether it's the main game or the thousands of custom ones... everything is just so much fun.

There are many things that make The Wind Waker stand out, and it's not just the game's cel-shaded visuals (which are completely brilliant). The game starts our young hero off on this tiny little island in the middle of a Great Sea. The land of Hyrule, which I had come to adore by that point, went missing without a trace. Only later on, in one of the most awe-inspiring and heart-wrenching events that I've encountered in a video game, did I realize that Hyrule had been flooded... and that the handful of islands were all that remained. The game also made us look at the character of Ganondorf, and his role in The Wind Waker has made him my favorite video game villain of all time. Sure, there's a lame Triforce hunt near the end, but other than that, The Legend of Zelda: The Wind Waker was a sublime experience for me with events that will continue to be unforgettable. Also, playing in Link's PJ's is awesome. 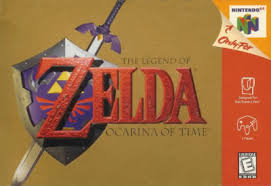 Just like with Mario before, Nintendo masterfully managed the jump to 3D with the Zelda franchise. OoT was big, fun and retained that Zelda feel from the 2D games. It was a whole new way to explore Hyrule and now Ganon wasn't a huge pig anymore (well not all the time at least).

With the C-buttons needed for items, camera control could have been a pain but Nintendo found a great way to work around that and introduced the Z-targeting system to help Link fight in the 3D world. The game featured a great number of dungeons and plenty of secrets to keep you busy for a long time.