a LOT was changed on GoW 2018, and my preference for gameplay style were the older ones. But as a game, GoW 2018 is better than all the previous on in every single aspect. Not my favorite "to play", but likely the best game of the gen.

My favorite is Ghost of Tsushima, and if it had the budget and experience of ND it would have topped TLOU2 in all aspects and possibly GoW.

Your statements contradict each other. Now if you replaced 'game' with 'movie' then it would make sense ( ͡° ͜ʖ ͡°)

Personally, a big reason why I enjoy games is because they are entire experiences. They have music, stories, gameplay, interactive worlds, etc and it all comes together to make for experiences beyond just what thumb movements are made (experiences beyond being what the gameplay by itself entails)

And like I said in my first post here, it's totally fine if you have different tastes in games. But you should also understand that other people are going to have different tastes in games, and not everyone is going to agree with takes like "God of War is bad because there's no jumping button". In fact most people probably wouldn't agree with that take, because really it doesn't make much sense by itself. Some people like easy games, some people like hard games, some people like games with 15 hours of cutscenes with 30 hours of gameplay in the middle, some people only like games with 0 hours of cutscenes. And that is all 100% fine, and you should realize that's the case too.

Yes, I know that most people can be easily manipulated and bought into hype.

No, 0 contradiction. I simply can separate what is my personal taste than what is a technical analysis.

I may prefer one game while acknowledging another one is better. Not sure what is contradicting in that.

The guy in the video doesn't understand basic level design.

He says he wishes he had a jump button so he could explore what is over there: 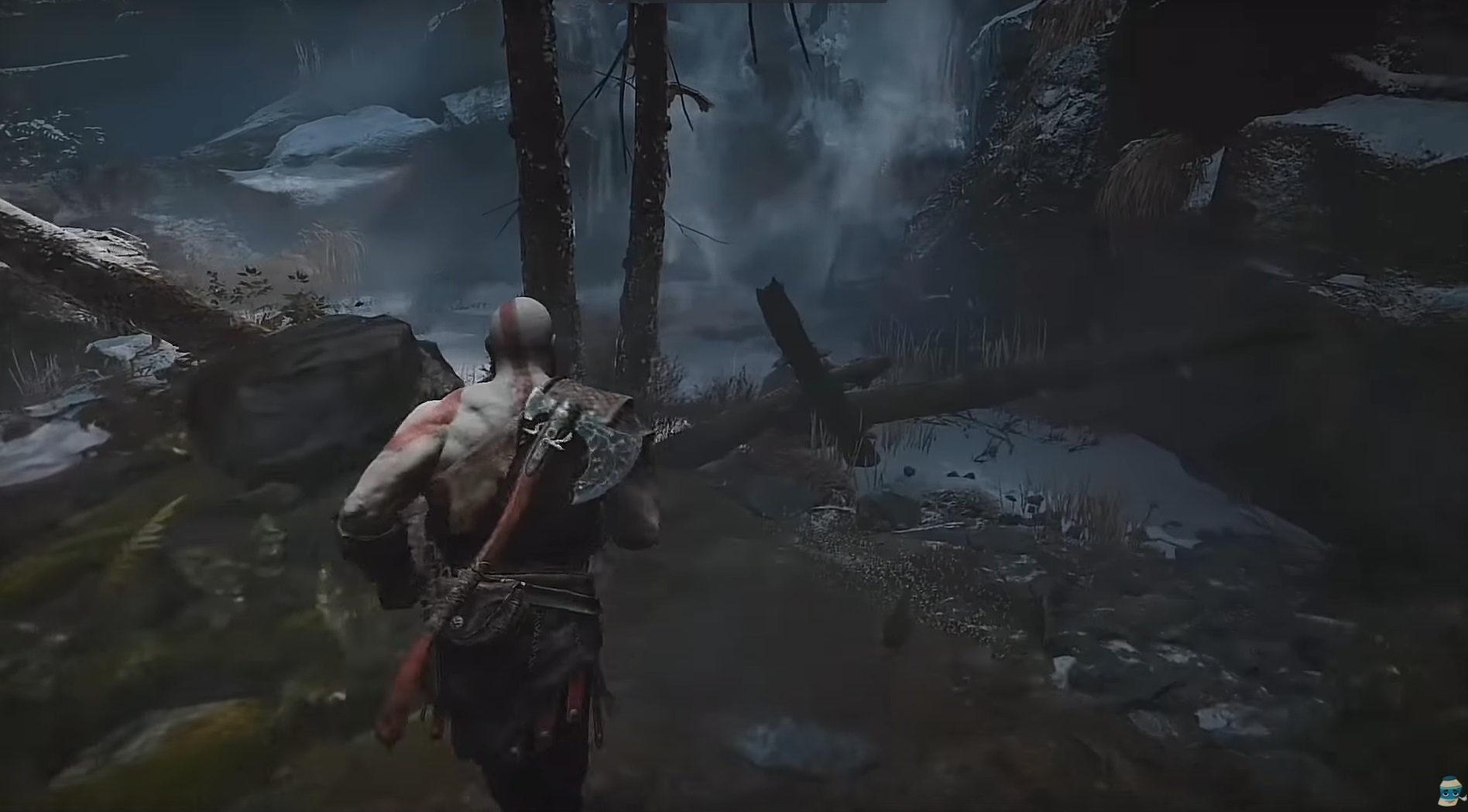 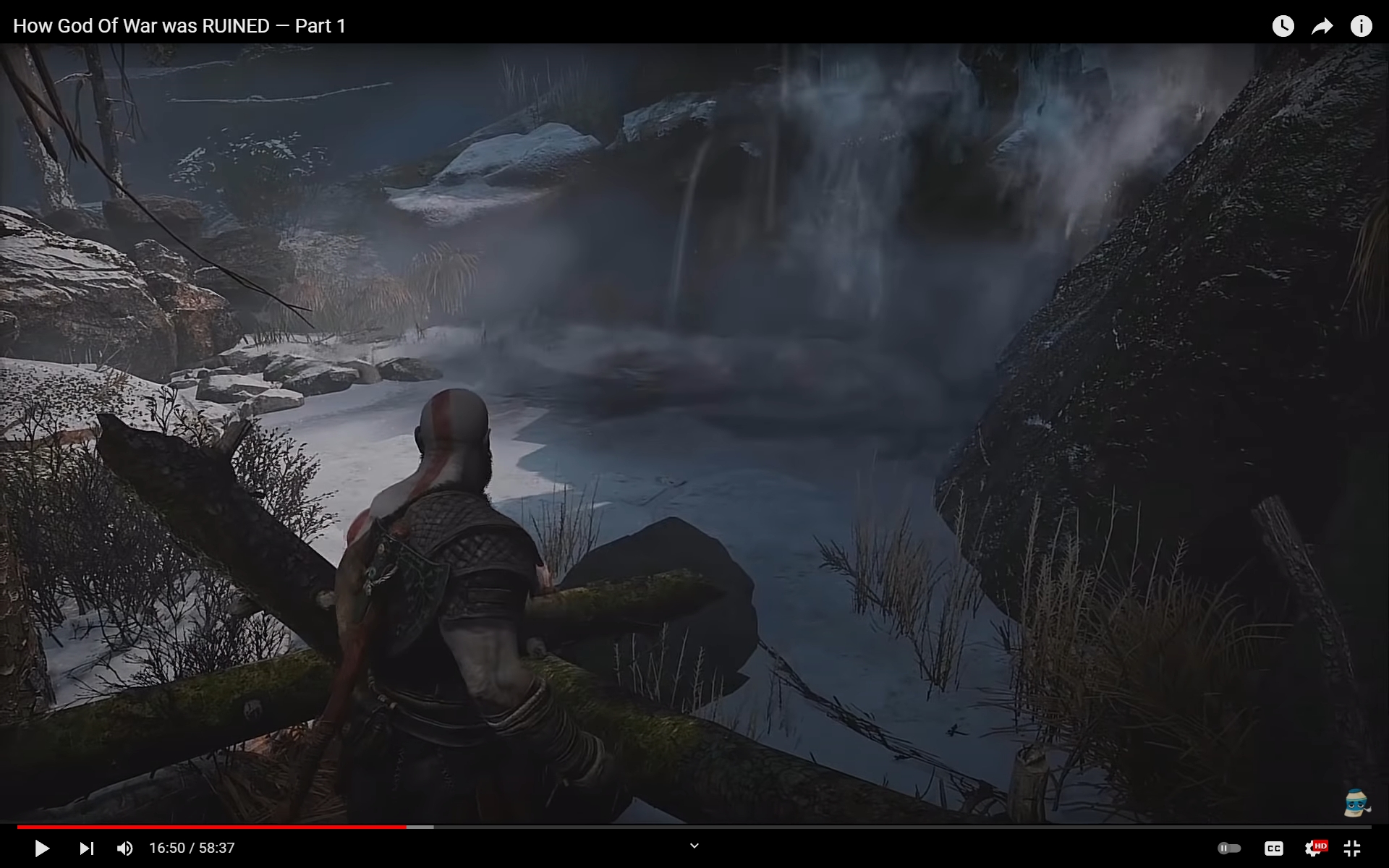 Missing the point. That the devs don't want you to go there. If they did, there wouldn't be a tree blocking your path. Or there would be a button prompt to get through.

If the game had a jump button, and they don't want you to go to an area, you still won't be able to go there. Just like with the tree blockade, they'll just design the area in a way that prevents you from going there, even if you can jump.
Like this: 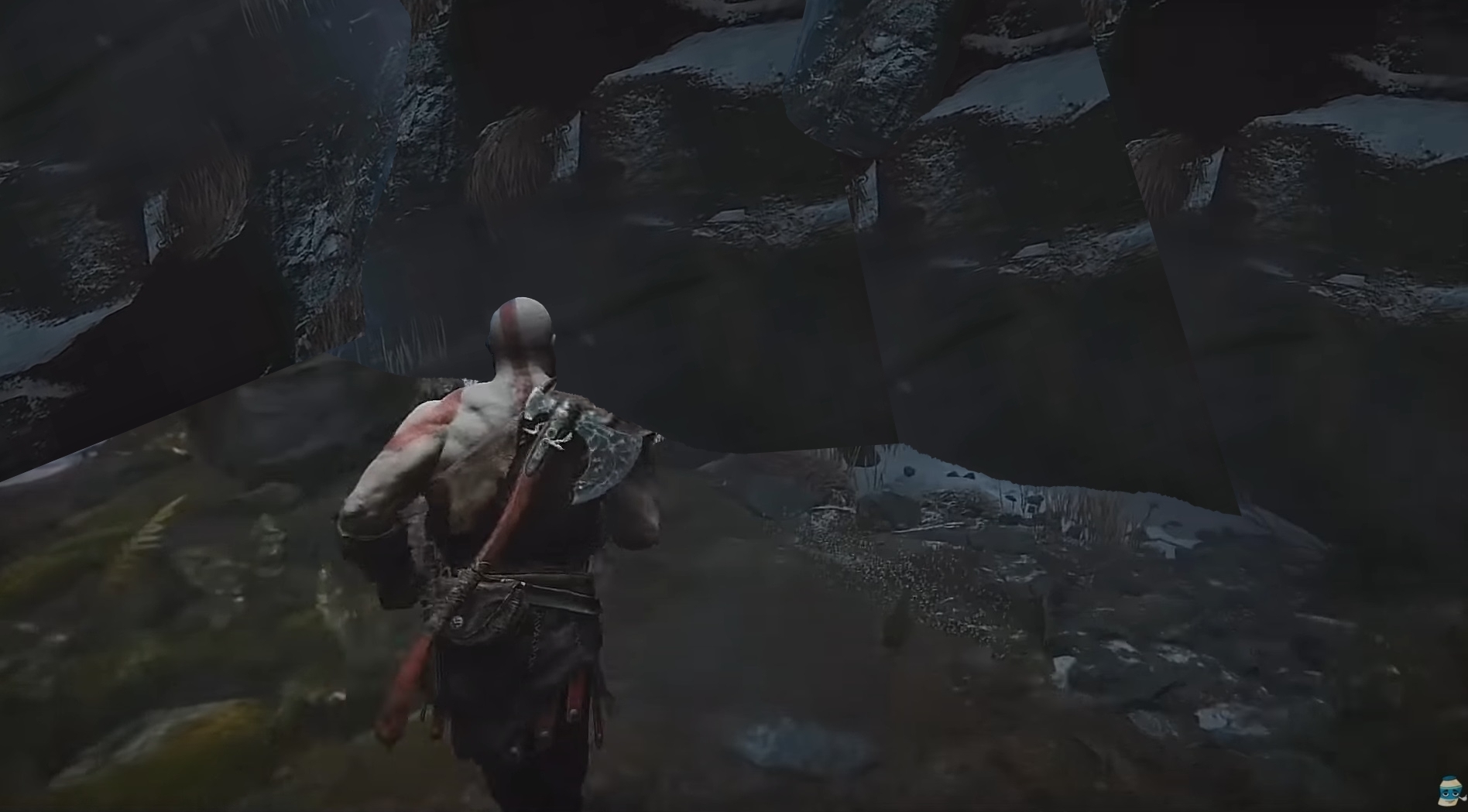 Blocking it off with a big rock that you can't jump over.
Is that better? Because now you don't even get the nice view. It's just a huge eyesore boulder in the way.

Level design is built around the gameplay, and vice versa. You can't add traversal options and assume that the level design would remain the same.
Rather, consider what they were able to show us because we don't have a jump button, or a fly button, etc. Because you'll be trading that off for the jump button.

The boundaries of where you can and can't go are more subtle because Kratos movements are more limited. If they weren't, those boundaries will generally be more intrusive. Because they'll have to design everything to prevent people from jumping, or double-jumping beyond where they're supposed to go. Rather than just preventing you from walking there, to which a fallen tree will suffice.

It's a different approach that has it's pro's and cons. Don't just assume that the levels would stay the same, or that it has no positives, before considering why they chose this, and what they can do with it that they couldn't, or wouldn't, do with a jump button.

He then says that the jump prompt is for "dumb people", but ironically he didn't consider a very basic idea of level design.

I can't speak much for the combat difference since I didn't play much of the previous games, but I may very well have found the old combat more entertaining.

You should also know that you are not alone in this world, and most people won’t think the same way you do.

Hype has nothing to do with my appreciation of the game. And I’m sure it’s the same for most people commenting about it here.

You didn’t like it, fine. That’s you, your expectations, favoured game styles and whatnot. There’s no reason to try to somehow prove your needs for certain games are the correct ones. That just makes you look like you’re a self-centered person who hasn’t grown past his teenager mindset.

Now, while you say most people can easily be manipulated and bought into the hype because of that, as if they can’t think for themselves, you use someone else’s youtube video instead of developing your own arguments by yourself. So I’ll rest my case here.

Because corridors with invisible walls are so hard to understand. Yes, I don't understand why the classic games could have fully fledged explorable levels but the latest and greatest game had to have corridors for levels. But hey, the grafix look great! Especially Krato's back that occupies 50% of the screen.

If you're ok with invisible walls then you should be more than ok with a tree blocking your path.
Because the former makes even less sense than the other.

Obviously devs prefer to avoid using invisible walls when they can. The mountain path with the black mist did have invisible walls, while the path in the image above didn't.

If you had said you wanted more free exploration and levels designed for platforming, I don't think anyone would take issue with your point.
But saying you want a jump button in this game as it is, seems pretty pointless because the levels weren't designed for it.

I asked "At what point did you wish you had a jump button?"

And the example you showed me was in a section where the devs didn't want you to go, in a video from a guy that doesn't understand that basic concept.

Not only that guy understands - he is woke, you are not :)