I think the saturation point for both is similar. The big difference is that Switch will sell 5m more.

One could say the 3ds was front loaded, but you could also say the Switch was a bit slow. Either way they have similar sales after 5 years, and it is obvious to anyone that the Switch will beat the 3DS by a good margin.

However I predict the same kind of situation. The 3DS sales all but stopped in year 7 when the Switch released. So if the Switch successor releases in year 7 or early year 8, we have weak legs.

Yes, it should. I'll correct the headers once the week 2 numbers are in with a new thread, which should be later today.

The incomplete software totals per platform taking every game appeared in Famitsu weekly charts in 2021 + other nudgets of data (period considered: from Dec. 28, 2020 to Dec. 26, 2021)

Switch started the year with another 30/30 clean sweep.  This is supposed to be an exceptional achievement, but it is starting to feel like the new normal.

It is pretty mind-boggling that nothing on Playstation can outsell things like The Battle Cats Unite! or the Switch version of FIFA22 on a weekly basis.

It’s amazing seeing the Switch go 30/30 in the software charts because it’s rarely happened before and it shows how significant the Switch is in Japan compared to the PS4/5 combined. It’s unfortunate Sony doesn’t seem to care to put up enough of a fight, even though they are usually gonna get the AAA third party games anyway.

Though it does speak volumes that even the AAA games on PS4/5 are not enough to offset the Switch dominance in Japan. PS4 had every big Japanese third party game under the sun and yet it missed the 10 million mark in terms of LT hardware sales, while the Switch is getting closer to GB/DS territory while released ~4 years after the PS4 (not to mention the OG Switch console is selling well at it’s initial $300 launch price and the big games are $60 or so). There are a lot of factors to consider, sure, but it nevertheless shows how incredible Switch is performing at a time Japan is on a decline (compared to its formative years) and has focused on other platforms such as mobile over the years. And people also take for granted that the Switch is doing really well in all the other major territories too so all this “focusing on the West” is kinda inexcusable.

It’s telling that even one of the big games that released on PS4/5 in 2021 could not even chart in the top 30 during most of the weeks of the holiday season. Will be interesting to see how the PS5 performs in 2022 in Japan. I guess the silver lining is that it can only go up from here, especially on the software side where it’s just abysmal for the console.

Hardware was just barely on the decline in 2021.  That doesn't mean that software sales have peaked yet though.  2022 is looking to be a big year with Arceus, Kirby, Splatoon 3 and possibly BotW2.  On top of that Switch gets more 3rd party releases each year.  I kind of expect 2022 to look even more one-sided than 2021 when it comes to software. 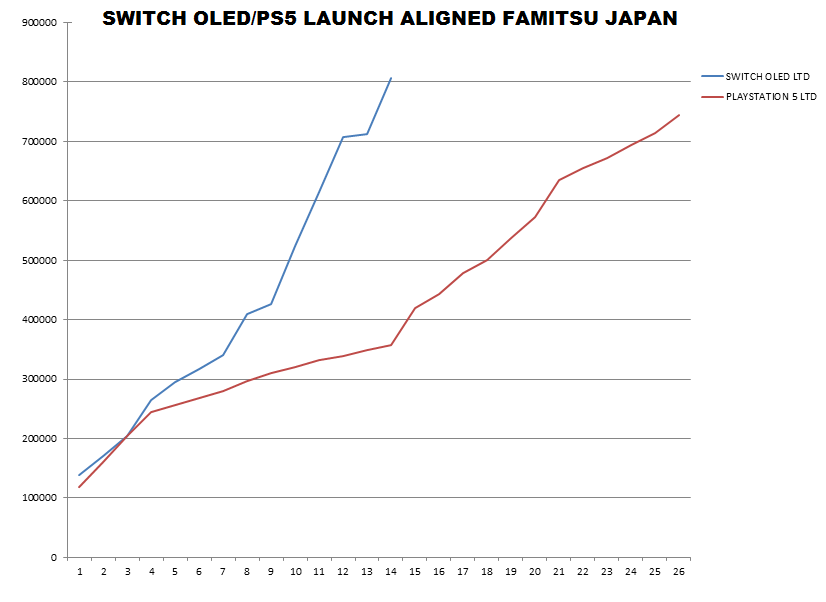 Where is week 12/13 info coming from? I haven’t seen any site that has individual sku breakdowns for those weeks.