Forums - Movies Discussion - Joker, there is one thing about this film I find very disturbing!

I put bread in the freezer all the time...

I'm a single man living alone, and I don't eat bread regularly. So, if I buy a whole loaf of bread, I'm probably only going to eat about 1/4 of it before it goes bad. So, when I buy a loaf of bread or a pack of rolls, I'll take out what I think I'll eat in the next few days, and put the rest in the freezer. That way I'm not wasting money on food I'm going to throw away and if the mood for a sandwich ever strikes I don't have to go to the supermarket just for bread. 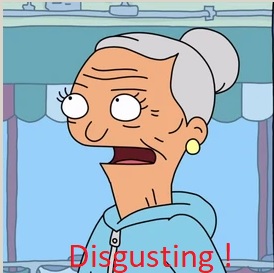 You've been brainwashed by big bread. They don't want you to put it in the freezer because then you are pressured to either eat more bread than you otherwise would so it doesn't go stale, or to throw it out and by new bread. If you sheeple can't see the advantage of freezing bread, then that's your problem.

Relatively recently I found out that bread from the freezer tastes and feels surprisingly fresh. It doesn't get soggy or anything.

Big Bread that's a good one sir.    I only wish bread lasted in our house long enough to go stale.  No freezer bread for us, just a 2 loaf bread box. I really only wanted to use the Edith meme ... couldn't find it so had to make one.

I have bread in my fridge right now, guess I'm a psycho. It's not really a good idea I guess, but it's not unsafe for food consumption.

It's not unsafe, but depending on the kind of bread it may not be a great idea. Bagels for instance will get hard really quickly when refrigerated and will last longer left covered at room temperature.

Um...I'm pretty sure that was the yeast of his problems.