One of the leakers suggested that Miles Morales will be introduced in the movies as well, though we don't know if he will be one of the fully fledged Spider-Mans who get pulled in with Doctor Strange's powers to help Tom Holland Spider-Man, or if it will be an origin story for Miles Spider-Man within the MCU, showing how he gets his powers.

Well guys, it has been 10 months since this rumor, and the trailer for Spider-Man No Way Home just drop. The trailer has confirmed alot of aspects of these original leaks:

-Alfred Molina Doctor Octopus, Willem Dafoe Green Goblin, and Jamie Foxx Electro have all been confirmed
-The rumor's statements about Doctor Strange causing the multiverse issues has been confirmed

The rest of the elements from these rumors remain unconfirmed officially. However, set photos and toys of Tobey Spider-Man and Andrew Spider-Man in costume have now leaked, strongly suggesting that they are in the movie. We don't know yet if the rest of these rumors are confirmed as well, Kraven the Hunter, Miles Morales, Nick Fury, Scorpion, etc.

Looks pretty sick. Though, they could have just pretended the Amazing Spider-men never happened. Maybe Sony insisted that if they wanted Tobey, Garfield had to tag along.

Many people believe that Charlie Cox playing Matt Murdock is Peter's lawyer in the trailer:

In this image it looks like he might be wearing sunglasses, which Matt Murdock does dues to his blindness. 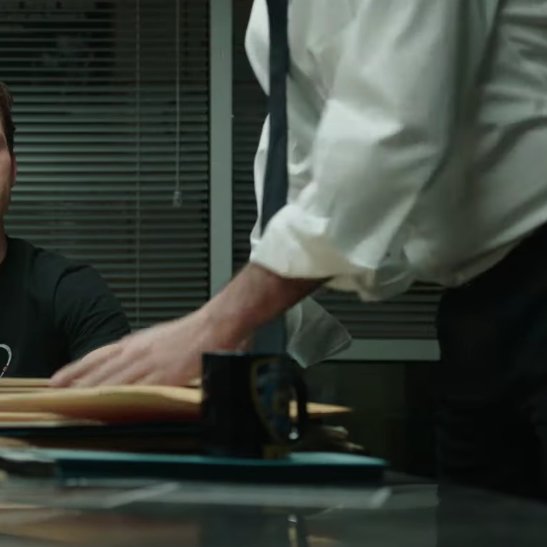 This image of the lawyer's hands and arms has many people noticing a resemblance to Charlie Cox as well. 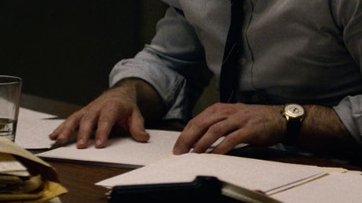 It was previously reported in December that Charlie Cox would be returning as Matt Murdock in Spider-Man: No Way Home, making his debut in the MCU after Netflix cancelled Daredevil and their other Marvel shows to spite the creation of competitor Disney+.

Many fans believe they hear Lizard's roar in the trailer, and see Sandman's sand. If you combine those 2 with the already confirmed Doc Ock, Green Goblin, and Electro, plus the rumored appearance of Scorpion after MacGargan made a cameo appearance in Spider-Man: Far From Home, you get 6 total villains for the movie, a possible new version of the the Sinister Six. So many villains would justify the need for 3, or possibly 4 Spider-Mans appearing in the movie (assuming the Miles Morales rumor is true). However, we also have rumors of Kraven the Hunter making an appearance, a rumor which has lead to a popular bit by Jimmy Kimmel where he claims he was cast as Kraven for the movie.

The image of the section of the trailer that fans believe contains the Lizard, when a dark silhouette jumps out behind Peter and roars:

The section of the trailer that fans believe to be Sandman's sand (alongside Electro's Lightning), the image also shows an unknown Spider-Man in the black and gold Spidey suit that was released as a toy for the movie, which some believe could be Miles Morales. 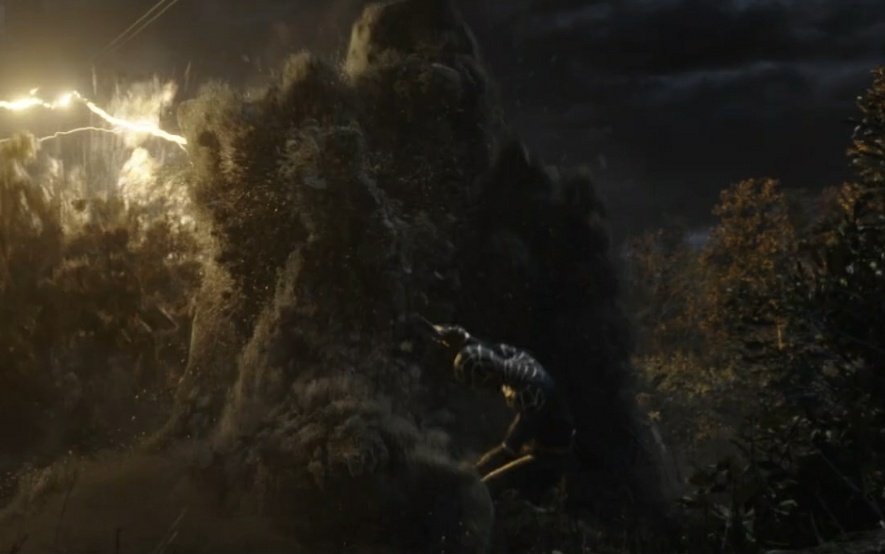 I'm pretty sure that's Tom Holland's Spider-Man wearing the black and gold suit that was shown earlier in the trailer (at 1:15 to be specific).

Yeah, that makes sense. I always thought the Miles Morales rumor seemed bogus, no way they will have 4 Spidey's in the movie, that is just too busy. If we are indeed getting six villains, Doc Ock, Green Goblin, Electro, Scorpion, Lizard, and Sandman, then 3 Spidey's would be a nice even number to take them on, 2 villains per Spidey.

Then again we also have the rumors of Kraven the Hunter making an appearance, though I suspect that will just be an end of movie teaser for Sony's 2023 Kraven the Hunter movie in their new Spider-verse, rather than Kraven actually being a main villain in this movie.

So I looked at the section of the trailer that some think contains a Lizard tease at 0.25x speed myself, and caught a screenshot that almost looks like the large figure that jumps out behind Peter and roars has Venom's white, triangular eye: 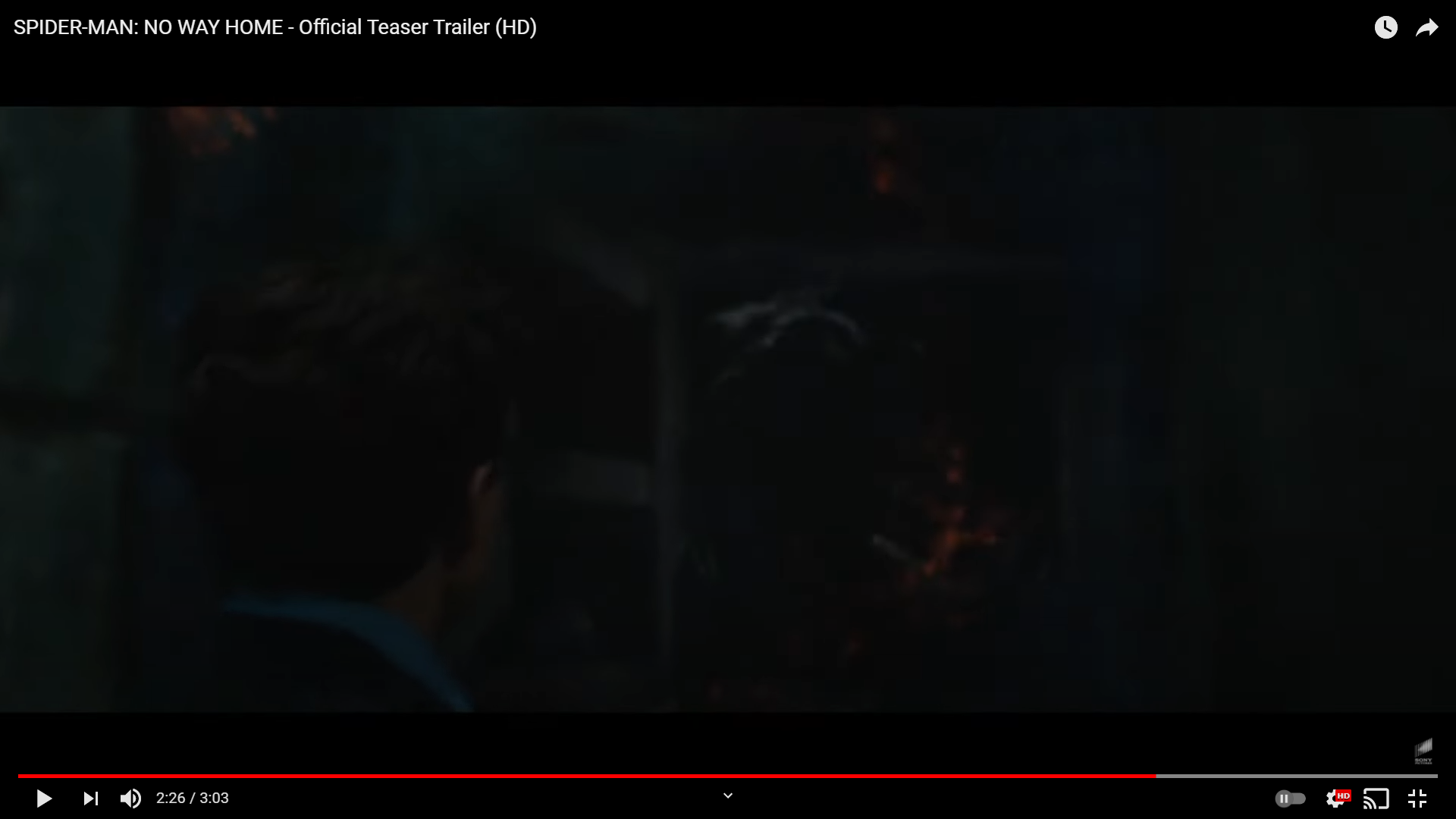 So maybe instead of Lizard from Amazing Spider-Man 1, we have Venom from Spider-Man 3?

Or could it be Tom Hardy Venom from the new Sony Spider-Verse? 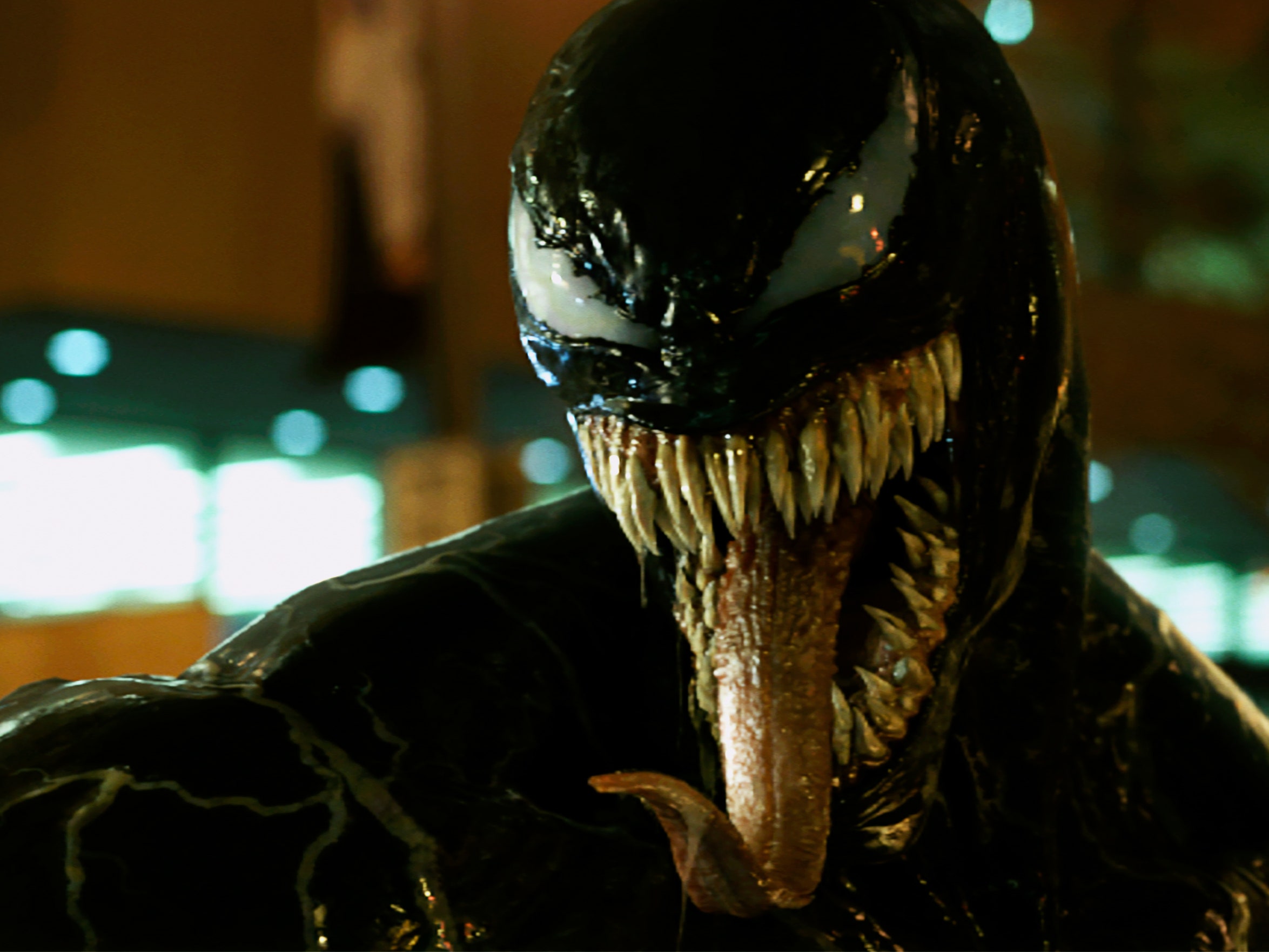 I had forgotten about these rumors while I watched the trailer, so seeing the end of it came as a nice surprise.
I hope they put in James Franco as well now.

There's another Spiderman movie that handled this theme really well: 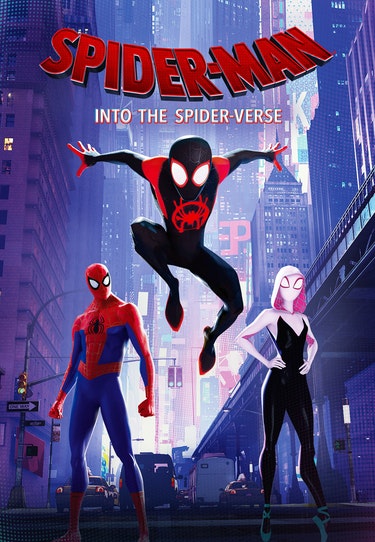 So I'm looking forward to this one. Although I haven't seen any of the other Tom Holland Spiderman films.

I'm hyped. Especially if this means that there is a faint chance of us getting another standalone TM-Spider Man movie in the future.