hahaha, I don't want scientific truth. hohoho how monkey I am, right?

There are exemples of science of yesterday that is wrong today.

In 10 years, I'll be here on this topic pointing out that this piece of news didn't materialize. And you will be here saying that I'm talking about old scientific models and journalistic manipulation. That's because YOU, my dear, just want whatever truth you want. :D :D :D :D

The Church argued heliocentrism was wrong. Some people have argued there's no climate change or coronavirus, or whatever, because the science was incomplete. These people were later proven wrong. Therefore, the Church and other science skeptics are always wrong. See how your fallacious argument goes?

Like other people, you can be more likely to accept evidence that supports your beliefs and more likely to scrutinize findings that do not. You can argue that applies to that Australian scients or whoever you want, but not that it doesn't to you. That's naïve cynicism to right there.

Faulty logic.  The inaccuracies of a previous projection are not an indication that future projections must also be inaccurate.

If that were the case, I conclude that everything you say from now on is wrong simply because you're wrong now.

I'm worried the world will go under while pointing fingers.

Every year it is big news how much forests are being destroyed and we all ''yell'' at those goverements where it happens and our politicians call them out and that's it,most of them take no effort in planting new trees in own country on unused open space and a few months later it is again a forgotten problem for most of the population.

Big chance the moneymakers behind the chopping will not stop till those great forests are gone and we need to start working on how to counter the negative effect that will have on the world cause at the moment we are not doing enough.

Many projections and models from the past were actually quite good, and demonstrate that the core science was well understood even 30-40 years ago. While we have certainly improved in our understanding, we shouldn't just write off the past due to a few bad predictions (and again, it is important to put those predictions in context with the overall scope of scientific understanding). Additionally, it is worth remembering that models not only have to predict the science, but human behavior. For obvious reasons, old models did not factor in the impact of the fall of the Soviet Union or the rise of China in their estimations regarding CO2 output. There are also unpredictable natural phenomena such as volcanic eruptions which can skew the results in unpredictable ways.

That said, lets look at some old models: 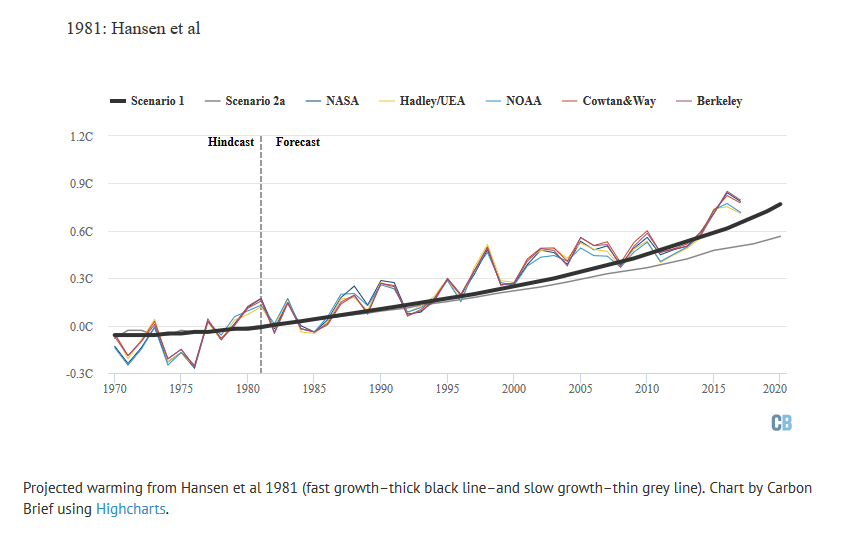 This one was from NASA Scientists in 1981 and showed a very slight underestimate of global temperatures, but overall came pretty close to nailing it. 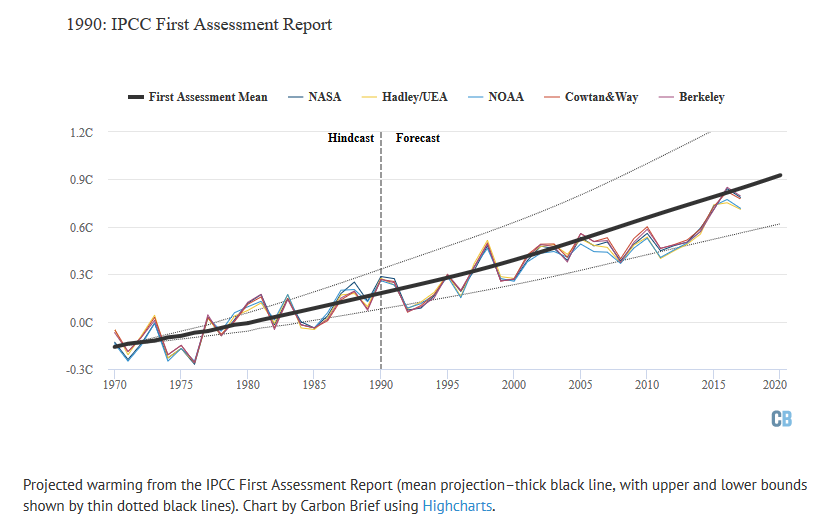 This was from the very first IPCC report in 1990, and similarly showed a pretty good projection of upcoming temperatures, with only a slight overestimate around 2010 that has largely been erased.

Climate science has largely been a process of refinement. It is taking a solid, core understanding of climate change and introducing a large number of other small tweaks and variables. These do affect models and show inaccuracies in our old understanding, but at least over the past several decades, they are a series of small shifts, not foundational changes. Every once in a while someone jumps up and says "wait, I think we were wrong". Those are typically the "doomsday predictions" we see. They are people claiming that the core science is incorrect. The fact that they are wrong shouldn't be used against the core science. If anything, they strengthen it.

Indeed.  And in truth it wasn't even the scientists themselves providing 'doomsday' scenarios but rather media that either didn't understand what they were reading or were simply engaging in clickbaiting, as it were for the time.

Wasn't the world flat at some point...?

Actually, no.  Scholars from all over since the ancient Greeks have accepted the Earth as round.  Those without formal education and no access to information or those with information may have guessed it was flat but it wasn't ever a consensual view.

CFACT is a website sponored by big oil to defame climate change. It's mostly financed by ExxonMobil and the Koch Brothers.

Or, on a more complete scale: https://www.desmogblog.com/committee-constructive-tomorrow

In short, I believe them as much as a Nigerian scammer.

In fact, the reason why Columbus got rejected so many times before Spain financed their travel was because not only was known, that the world was round, but even the size of the earth was pretty well known (they were off by a mere 300 kilometer or 180 miles). As such, it was known that Columbus's plan just couldn't succeed, as no ship at the time was big enough to bring enough supplies for such a long non-stop trip. Just take a globe and measure the distance between Europe and Japan by going through the Atlantic, Pacific and North America, that's just a huge distance.

The "real" drive, should be that it destroys your testicles (so people cant reproduce at simular rates).
However to mask that, we need to have it target other area's like lunges, heart, kidneys, brain as well.

It only needs to kill 1% of the people that get it (early on), but it needs to permanently damage, like 50%-75% of people that get it, with some form of lasting damage. That way, they dont notice the real number, of deaths it causes because it ll be over a periode of 15-20 years.

Nah.... it could never happend.
We dont have the science to create such a thing.