Forums - Gaming Discussion - Why the SSD is a big deal for PS5, Series X.

So the reason Cerney cited PS1 as the starting point of this issue (aside from working at Sony, but that generation specifically I mean) is because that was essentially when field of view (from first person or third person) started becoming more standard. In side scrolling 2D platformers, your field of view is always constrained to a specific, usually small area.

Such as Ori, or Bloodstained. But even in those cases, they want to allow you to see as much pleasantries in that constrained space as possible, without tanking the framerate too much, or having to remove details, etc.

So in a side scrolling platformer, they can use this technology to for example allow you to move much quicker without making notable artistic sacrifices.
From my observation you can move much quicker in Bloodtained than in Oro.

A tradeoff would be that Ori can and does have much higher fidelity instead.
And if the textures in Ori are so detailed and beautiful that they push the limits of what the system is able to load in, then the faster and bigger the memory, the more beautiful they can make the game.

Which is one reason why even with Xbox Serie's X's SSD, there will be advancements there.
Though Sony are making their SSD so fast and multitask capable (traditional SSD's have two true purposes, while theirs has 6) that it can even function as RAM, which is why this is so fascinating.

Okay, I just wanted to know if we will see improvements to other style of games.

The thermometer on the left:

Could probably be eliminated.

The reason it was there was because on the PS3 in particular, you'd have to keep the entire level into memory.  So you would be constrained to the 256 MB limit.

There's a bigger limit on PS4, but there's still a limit.

With an SSD, if a game designer wanted to make bigger levels, they could.

Want to make a huge 2D world that is completely continuous, (ie imagine if every level of Super Mario Bros was connected and all on the same screen.), you can.

Want that world to have moving parts all over?  You can.

Okay thanks, Hiku explained it to me as well. Well lets see if devs take full advantage of these super fast SSDs next gen

Yeah, basically if the CPU and GPU is essentially responsible for what a system is capable of creating, then the memory is what keeps that capability visual on screen. All these systems, including PS5, are capable of creating visuals far beyond what their RAM and SSD can handle, in theory.
But no one would make such a game because it wouldn't work. They only push the visuals as far as the memory can handle it. Or when it can't, they use various tricks. Put up walls, lower the resolution or framerate of some distant objects, fade objects in and out from your field of view, etc.

PS5's SSD is not limitless, but it's such a huge leap from what anyone expected, that it's sitting at the point where people think it will eliminate these issues for what next gen graphics are expected to be.

Though for third party games that go on all systems, they can't make full use of the PS5 SSD since it has to function properly for all systems.
They could probably use it to scale texture resolution and such between different systems, but no developer is going to redesign entire areas just for one system.

Yep, those are a few. They even talked about how being able to fill the RAM in 2s would allow for faster turning around or having more show because you won't crash when you talk that 1s to turn around. I'm very interested in all the tricks they are going to use this gen to make even better showing than last gen.

If the number one request from devs was SSD and both platform holders put very good and fast solutions then it is for them to take advantages.

Of course not all titles or genres will use it, not sure why choose indie games to ask how that would improve those games. But if they want they can make much better games with this.

One thing I'm a bit confused about.
What exactly is it that makes the PS5 SSD able to function as RAM so efficiently? It's not just the speed, I'm sure. Because Cerny said that other commercial SSD's will need to be faster than the PS5 SSD's 5.5 GB in order to work on PS5.

Is it the custom I/O unit? 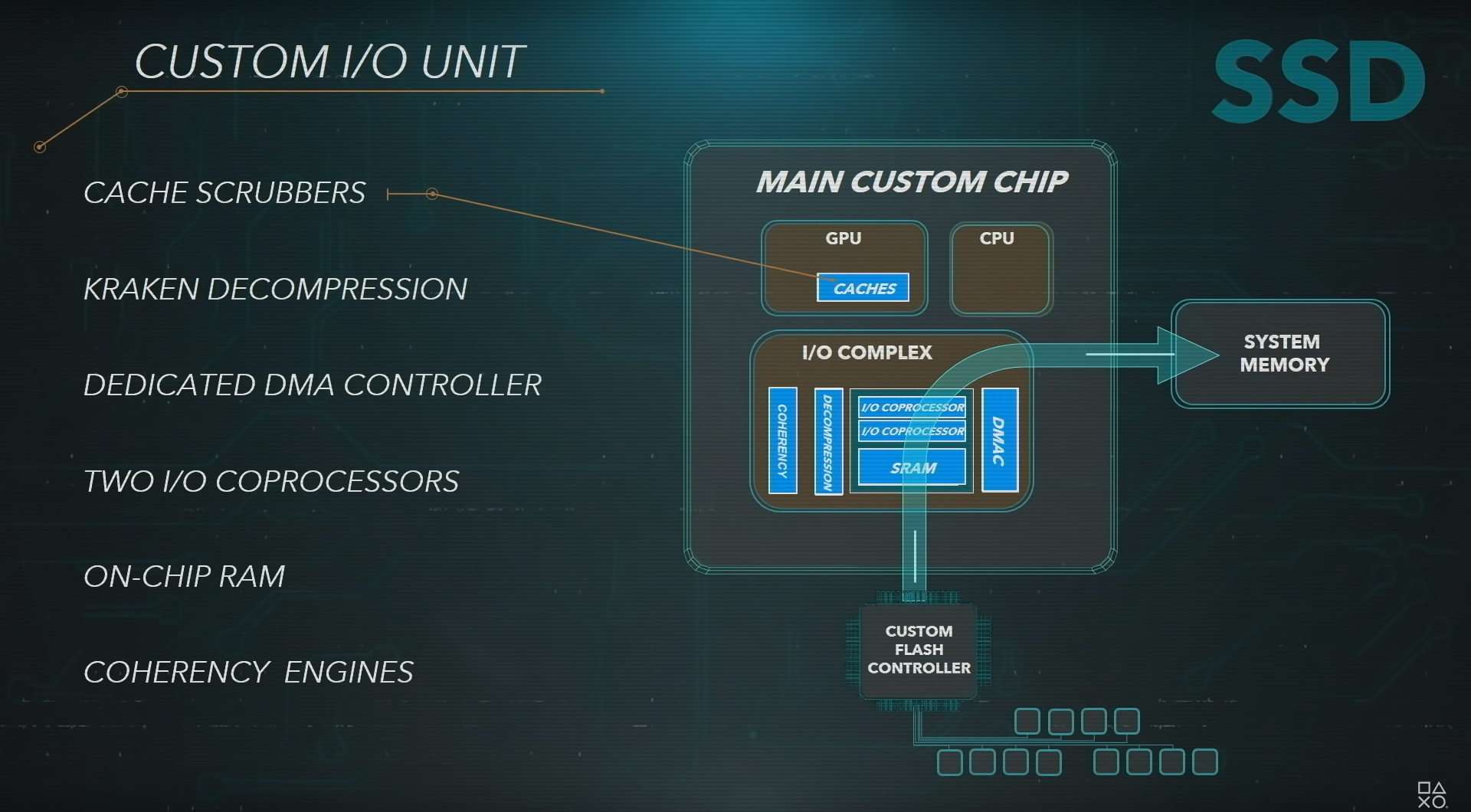 I would say it is the controller. Because even old PCs with slow HDD used that for "cache" as some virtual RAM.

So when SSD is very fast on PS5 it can help the RAM without being an issue for the performance I guess. There is also the coherence unit that will support the fill and removal of data from the RAM and that is on the SSD solution.

Virtual Memory is possible on any kind of HDD, but it's no where near as good as RAM, because it's too slow.

Custom I/O unit is a big part of the speed.