Where do you have that data from?

It’s really just a clever loophole to get people playing Xbox without actually buying a console. Playing on your home wifi alone is viable, but of course will never compete with traditional gaming.

But you shouldn’t dismiss it forever. It will be more mass market as the years go on. MS actually being very careful with their small and slow preview roll out

"Sony - aim for PC gamers. PS5 will be an extremely capable home console. Sony games will appear on PC. Sony will differentiate from the PC experience and use tech to provide a better console experience".

So like, apart from simply taking on the natural action of selling to the PC platform, what exactly has Sony "differentiating" between their console/PC releases?. All you've said at the end is "consoles get the better experience", and I'm wondering where that leaves PC, because we know what PC's are capable of doing, so whatever tech is used on consoles, can also be adopted on PC and vice versa (if anything PC gets new tech the most before consoles ever do, so I'm not sure how this makes them different).

There's almost no way Switch will outsell PS4. The PS4 has already passed the Wii and PS1. PS4 is looking at 120-135 million title units sold. Now will the Switch outsell the PS5? Probably. Even if the PS5 sells more than the PS3, I don't see it surpassing the PS4 and PS2. Let's all remember that the PS4 has been a sales homerun because of Nintendo and Microsoft screwing up. The Wii U had horrible marketing and an underutilized gamepad. Xbox One forced Kinect 2.0 down your throats, leading to a ridiculous $500 price tag.
The PS5 will have a harder battle than the PS4. The Xbox Series X looks to be a much better console than the Xbox One. The Switch will still thrive for at least a few more years, and then get a successor midway through the life of the PS5.
As for the subscription aspect, I don't see Sony releasing almost all of their first-party lineup on Windows. Especially not the way Microsoft has been doing it. Yes, we'll see more Sony games on Windows, but I don't think it will be that big of a game-changer. Sony wants you to buy their hardware. Just look at their stance on cross-play.
Nintendo would have to add a lot to their online to justify a $60 yearly subscription. Either greatly improve the online itself, or add N64 and GameCube titles. I hope they do both, and I hope their online subscription doesn't go up to $60/year anytime soon.

My wants: MS/Sony and Nintendo release all games on PC. One can dream right?
But OP, would not surprise me if the next 2-3 years we are all consumed within subscriptions. 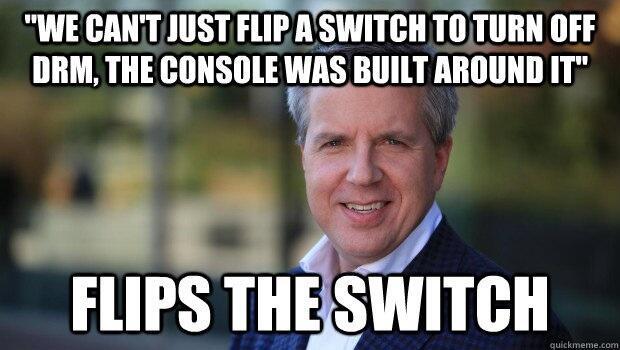 So does this mean they will be able to flip it based on last time, or when they say they can't this time, they legitimately won't be able to? If we've learned anything, it's that anything is possible with XB 180.