I was surprised it was launching so soon, so a delay to a less busy season is better for me. 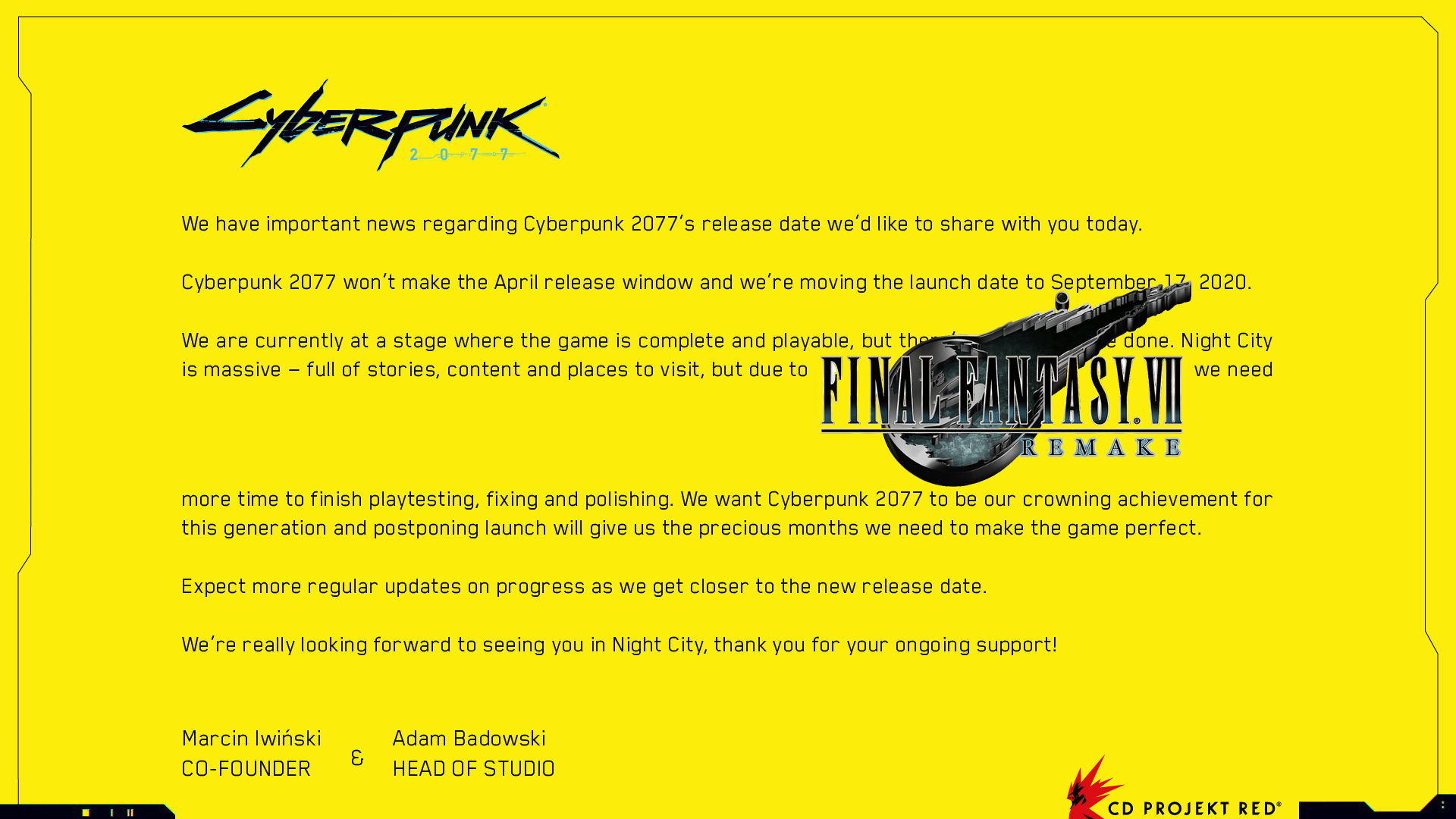 On a serious note, I'm sure they just feel they need more time with the game before they're satisfied. And that's always good when publishers give developers that option, imo. (In this case CD Project Red is both developer and publisher though.) I hear it's quite rare these days. We may not think so, because we only hear about the delays. And not so much the games that get rushed. Which can be noticeable if there are terrible glitches Day 1, but it's much harder, or impossible, to tell when it comes to many other aspects of polish.

As a bonus everyone gets a better game, and they'll launch in a seemingly less crowded time of the year.

I assume you are joking, but just in case you were not, Benji revealed day before yesterday when FF7 was delayed until 1 week before Cyberpunk, that Cyberpunk preorders were tracking well above FF7 Remake, even in a PS4 vs PS4 only contest.

In terms of sales impacts from the recent dates shifting

It potentially hurts FF7 Remake far more than Cyberpunk 2077. The 2 now release within 1 week of each other and Cyberpunk pre-orders far outpace FF7. Hopefully will be room for both but if one takes the hit it will be FF7R

The delay happened for one of 2 reasons, probably a mix of the 2:

Never heard of'em, but I can tell you FF7 Remake will not be hurt at all, people will buy it and some will buy both. I question where he is getting these pre order numbers from. I've yet to see cyberpunk 2077 make it on the top 100 Amazon best sellers list yet. Even though it has the advantage of being multiplat.

A not so surprising move from CD project ...Anyway, a 5 months delay already tells me what I should know. Development of the game is probably just as chaotic as it was for TW3 so much so they delayed it 5 months from what they thought at first.

I'm expecting sadly so frightening stories from ex-devs once this whole shabang is over.

Well I won't be playing it on ps4 then, ps5 version it is.

Bad news for the devs that had summer holiday plans. It's common to save up holiday time for after a big release, got to save em up 5 months longer now.