Gonna go watch it in 1 hours..I hope its better then the pile of trash TLJ was.

My low expectations are met with low critical scores. So... Whats new?

Considering the absolute nose dive that they've been on, would anybody really be surprised to learn that they couldn't course correct?

I mean how could the ending to this trilogy be anything other than bad, when they started it without any clear outline for where it was going, the middle movie threw all the major mystery box plotlines from the first in the trash, and then you ask the guy who had all his set ups tossed to come back and finish it, by in turn giving the middle movie the finger and trying to piece his half baked ideas back together, while of course also coming up with an ultimate end to the "Skywalker Saga" that all the already angry fans won't crucify you for…….


Can't imagine how that could possibly turn out poorly.

I only partly watched watched half of The Last Jedi (right, part of the half of it), and I won't be watching the Rise of Skywalker, and this review just solidifies my choice. 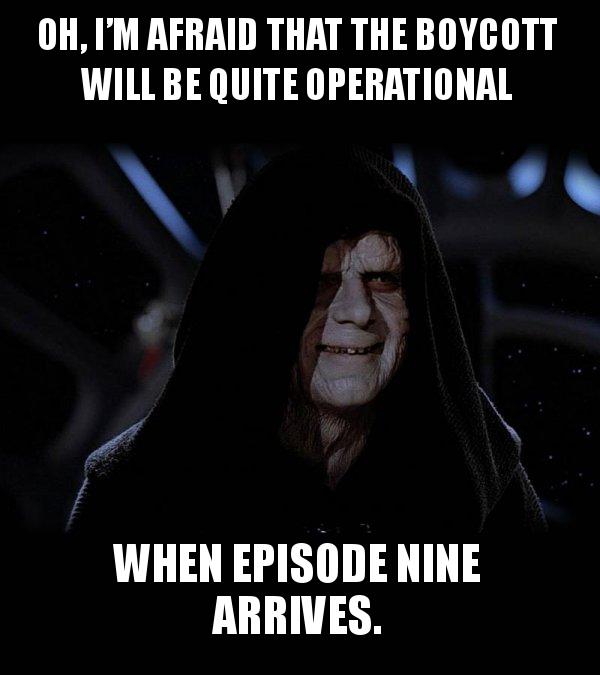 I don't take review scores for face value as something I can apply to my own taste.
I'll either have to see it for myself, or read/see a detailed review of it.

That said, my expectations were already low to begin with. I didn't particularly like Episode 7, and I found Episode 8 to be terrible.

You claimed you don't want politics in your entertainment. Yet you go out of your way to bring it into the entertainment section, every single chance you get.

If you want to suggest that a movie failed because of some supposed politics not explicitly stated by the film, then make a thread about it in Politics Discussion.
Staff are tired of cleaning up political mudslinging you consistently start outside of that section.

They just need to reboot the whole thing.

Yeah, I would love a total do-over on the sequel trilogy, just make this one non-canon. Sadly, Carrie Fisher’s untimely death made a do-over difficult to say the least. People wanted a proper OT cast reunion in the ST, that will never happen now.

What they actually need to do, is nothing.

For me too many of them take this shit too serious and look for things that are not there to try and sound like they invented the cure for cancer and that is the only valid opinion. It is just a movie. Not everything will be perfect. There is no need to over analyse everything in a movie just enjoy it for what it is.

On the flip side, I'll use the Joker as an example of over analyzing it.

If the movie wasn't called Joker, would it score so highly with regular viewers? Take that title away and all you see is a man with mental issues. Is that something that people would want to watch?

Now for me the biggest disappointment was if this movie is truly a one off as they said (and don't change mind to cash in on a sequel), it basically ended nowhere that ties it well to the other batman movies. How can you praise a movie like that which has no real tie in other than a name?

Now I could sit there and say the movie was so bad because of that flaw (my personal opinion) and hate on the movie, but overall when you don't over anaylse things, the movie was pretty good to watch irrespective of the title. It showed how years of mental fuckup can turn a regular man into snapping to be a deranged psychopath.

At the end of the day, everyone has an opinion like they do an arsehole. Some will love some will hate.